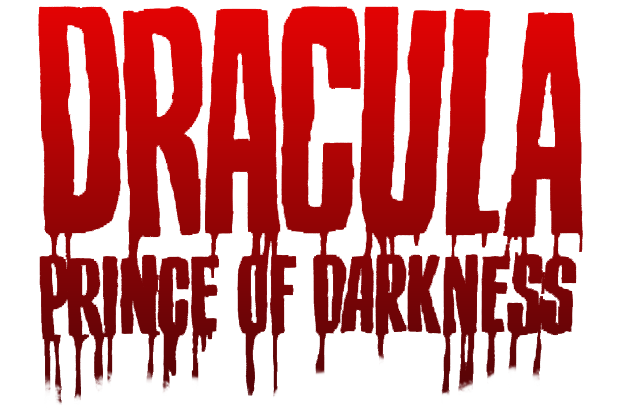 It took Hammer studios 8 years to persuade Christopher Lee to reprise his role as Bram Stoker’s vampire count and re-unite with director Terence Fisher for another neck-nibbling adventure. When he did finally agree to slip back into the famous cape Lee so hated the dialogue that had been written for him he refused to utter anything other than feral snarls throughout the entire movie.

‘Dracula: Prince of Darkness’ opens with a lengthy recap of the climactic moments of Hammer’s original 1958 undead opus. Old fang face may have been reduced to dust 10 years previous but the local residents of the Carpathian Mountains are still prone to driving stakes through unsuspecting corpses and hanging garlic in their windows just to be on the safe side. 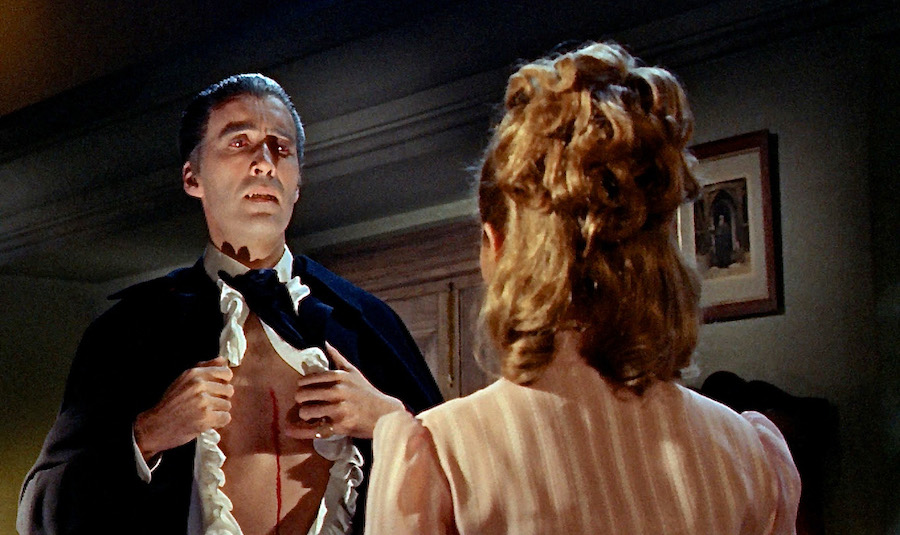 Father Sandor is a pragmatic, wine-swigging, gun-toting monk who has no patience for the local’s superstitions however when he encounters 4 English travellers on a site-seeing tour of the area he warns them to stay away from the castle which overlooks the road to Carlstad. Unfortunately Charles, Alan, Helen and Diana find themselves abandoned by the roadside when their coachman refuses to continue their journey under cover of darkness. When a driverless carriage mysteriously appears they commandeer the vehicle but instead of continuing on to Carlstad the horses turn tail and deliver the travellers direct to the castle where they discover a table set for dinner as if they were expected as guests.

Looking like a refugee from the Addams Family a butler named Clove appears to serve food and explain that he is carrying out his dead master’s wish that the castle welcome any passing travellers in need of bed and board. Helen is frightened and tries to persuade the others to leave but her husband and friends are happy to accept the absent Count’s hospitality and settle in for the night.

His sleep disturbed by strange noises Alan follows Clove as the butler drags a heavy looking trunk down to the castle crypt only to be rewarded for his nosiness by being strung up above a coffin containing Dracula’s ashes, his throat slit to provide the nutrition necessary to reconstitute the desiccated lord of the undead. I reckon there’s a gap in the dried goods market for powdered vampires: empty sachet, add hot blood, stir thoroughly and ‘hey presto’: instant Prince of Darkness. Clove summons Helen from her bedroom only for her to be confronted by her husband’s dangling corpse and the freshly revived Count and boy, is he hungry. 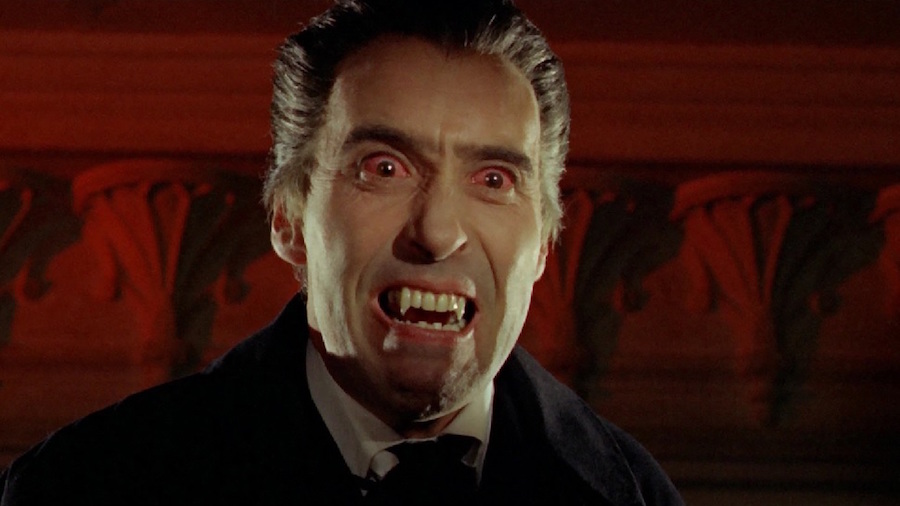 The following day Charles and Diana search in vain for their absent companions (note: UK readers may wish to take this opportunity to amuse themselves by picturing the former Prince & Princess of Wales locked in mortal combat with the Prince of Darkness). Nightfall finds them not only at the mercy of Count Dracula himself but also Helen, now transformed into his blood-thirsty vampire bride. A crucifix hastily fashioned from a sword broken in a dual with the maniacal Count aids their escape and retreating to the monastery Charles seeks the support of Father Sandor in preparing some payback for the fanged fiends.

‘Dracula: Prince of Darkness’ is a somewhat uneven but none-the-less enjoyable entry in Hammer’s Dracula series. The plot and pacing leave something to be desired as it frequently feels like a collection of, admittedly exciting, set-pieces without amounting to an entirely satisfying whole.

Dracula’s resurrection is a definite highlight and no doubt one of the bloodiest scenes in the Hammer Dracula filmography. Particularly creepy is the sight of the vampire’s hand as it appears clutching and crawling like a crab over the lip of his tomb. The brutal staking of Helen is another powerful scene; she hisses and snarls like a trapped animal as she is pinned to a table top by the monks of Kleinburg. Charles turns his face away in disgust while Father Sandor drives the stake home.

Whether Christopher Lee’s decision to eschew dialogue was a good idea or not is debateable; it inevitably results in the Count being an even more marginal character than the plot has already contrived to make him. In my opinion it also results in Lee being constantly upstaged in the villainy department by the brilliant performance given by Barbara Shelley as his first victim. Shelley was always a cut above the typical Hammer glamour girls where acting ability was concerned and she gives terrific performances in Rasputin The Mad Monk and ‘Quatermass And The Pit’ (aka Five Million Years to Earth). In ‘Dracula: Prince Of Darkness’ she essentially plays a dual role; the character of Helen starts the story as a prim and proper upper class English lady however she is transformed by Dracula’s kiss into a seductive, deceitful and predatory creature of the night. In both guises Shelley is marvellous and without question, in my mind, she steals the show. 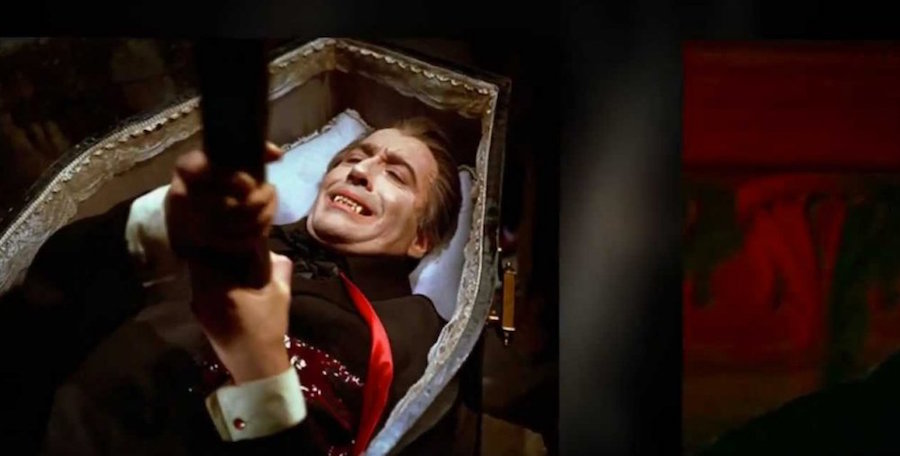 Although not yet over-indulging the ‘boobs n’ blood’ formula which would soon be the norm for Hammer’s vampire pictures ‘Prince Of Darkness’ does increase the emphasis on the sexual implications of vampirism – the scene where the Count bares his chest and pulls Diana’s head in close to taste his blood is as erotically charged as anything shown in the series thus far.

And so to the film’s ending: trapping Dracula in fresh running water beneath ice in the castle moat has always struck me as anti-climactic but perversely this unassuming demise is befitting for a villain who has up to now been a relatively minor character in his own movie. Christopher Lee fans may think I’m being a bit harsh but unfortunately from this point on in the series Hammer would insist on contriving ever more outlandish and implausible methods of (however temporarily) halting the rampage of their immortal villain.