One of Blaxploitation’s downbeat takes on horror, Dr. Black, Mr. Hyde (its fun title and poster art aside) is a decidedly somber look at conflicting allegiances, class disparities and race relations.

In the lead as award-winning Dr. Pride (no one in the film has the last name “Black” or “Hyde”) Bernie Casey takes his role very seriously. Good in the emotional scenes and committed to character (he is developing a serum to cure cirrhosis of the Liver) he, nevertheless, lacks the humor needed to elevate the familiar material—and win audience points.

The supporting cast is filled out with Rosalind Cash as Dr. Billie Worth (check the positive last names of our main characters!)—Dr. Pride’s girlfriend—an equally serious research and ethics-driven practitioner, and Marie O’Henry as Linda Monte, a prostitute who is as comfortable in the nude as she is mocking Dr. Pride for being “too white.” 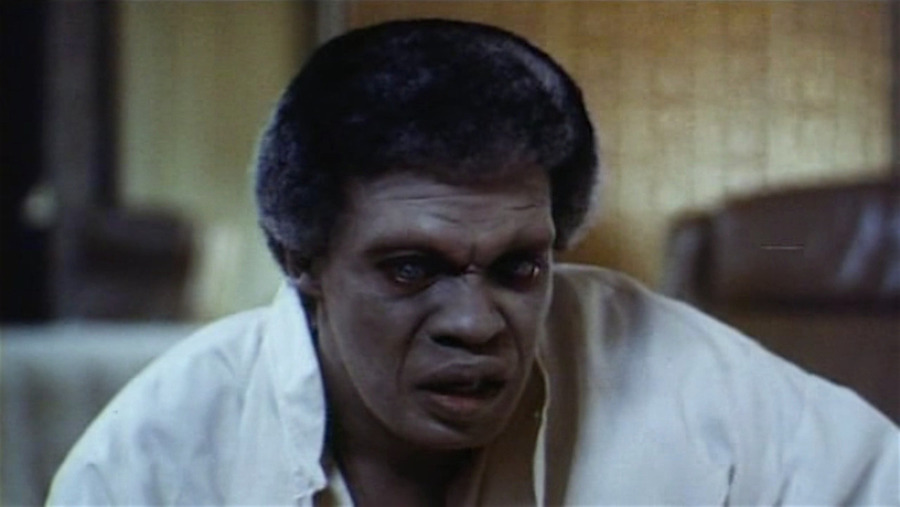 And, as it turns out, he is. When Dr. Pride injects himself with his not-ready-for-market serum, it transforms him into an angry, vengeance seeking albino: complete with white eyes, white skin and a white-dusted afro!

Director William (Blacula) Crain does a good job of taking us into the picture’s disparate environments: a squalid apartment building, the Moonlight Lounge, an inner-city clinic. He also provides a genuine “jump-out-of-your-seat” moment within the first twenty minutes. But, unfortunately, that’s about it: the hole-ridden script is insurmountable. Why can “Mr. Hyde’s” body deflect bullets sometimes but not others? Why can’t people recognize him in his “transformation” makeup—which is not that transformative at all (even though it was designed by Stan Winston of Terminator and Aliens fame). And why/how does a doctor who works in a neighborhood clinic have a sprawling Los Angeles home and drive a vintage silver Rolls Royce?

Still, Dr. Black, Mr. Hyde (re-titled “The Watts Monster” during a second run) is worth a look. The soundtrack by soul artist Johnny Pate is effective; both funky and eerie. The cinematography by Tak Fujimoto (who moved on to A-list pictures like Silence of the Lambs and The Sixth Sense) is arresting. And the large contingent of stuntmen (and women) pull out all the stops (that marauding, super-powered Mr. Hyde sure can hurl the bodies when he needs to)!

The climactic shootout atop Los Angeles’ famous Watts Towers (historic ten-story high metal sculptures) is a plus. Check out the comical, rhyme-heavy trailer—“Don’t give him no sass or he’ll kick your ass!”—on You-Tube.