Don't Go In The Woods...Alone!/Review

There are lots of "so-bad-they're-good" horror movies that I love. Like Hell of the Living Dead, Ax' Em, and Don't Go in the Woods...Alone! which I watched it for the first time on YouTube. I'll never forget how weird and totally entertaining this film is.

Four campers go into the woods for a little rest and relaxation, while lots of people (a bird watcher, two couples, artists, etc.) around them start getting killed. So, they have to make it out of the scary forest and find out who the killer is. Basically, it's the stereotypical slasher film but it's also the kind that most people MAKE FUN of. Let's start with the victims here, shall we? These characters have no background or depth at all. Take the opening scene, in which a woman (nameless, no backstory) is running away from something and then gets killed, then we cut to the introduction with the four campers! It's a jump cut at its finest. Another example is the death scene of a couple that, again, we have no idea who they are. They just get killed while they well, sleep in a sleeping bag? I'm not even sure about that at all.

The characters that most people remember is a couple named Cheri and Dick. Just look at their names! Could it be anymore obvious? Anyway, they are two of those "have sex then die" characters in the film. When Dick decides to investigate things outside the van Cheri says one of the most memorable lines in the film: "Be careful dick!". Wow, that's not subtle at all. Another character I'd like to mention is a fat guy in a wheelchair. He has nothing to do with this plot at all. All he does is awkwardly try to get to the top of the mountain (look! he's a fat guy and he's in the wheelchair! That's humor! *sarcasm*). The most hilarious scene with this guy is when, after he reaches the top of mountain, the killer cuts his head plum off in the most over-the-top way. It reminded me of the infamous boxing scene in Friday the 13th Part VIII: Jason Takes Manhattan which includes a similar comedy/horror sight gag. 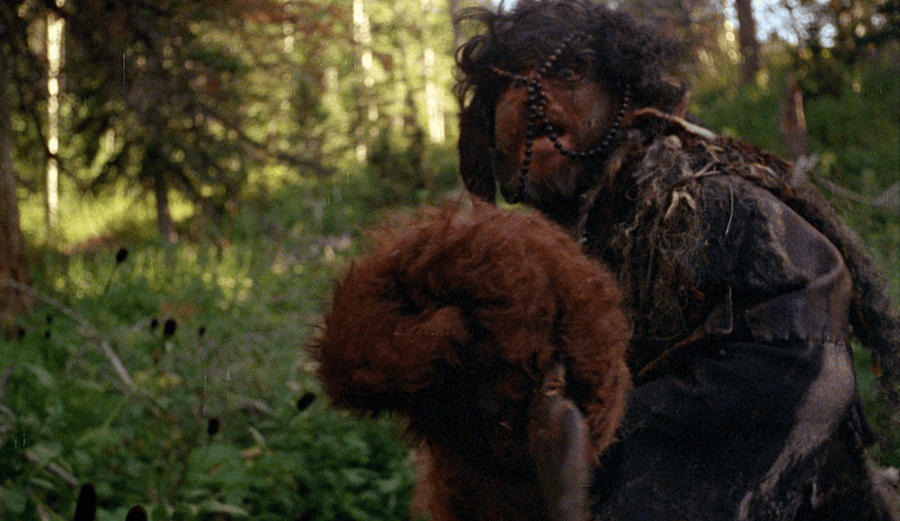 What about the soundtrack you ask? Most horror films have their own stings to play whenever the killers attack someone, just like Psycho has the classic violin screech (you know, the one that played during famous shower scene). In this movie, however, we have one of the cheapest stings of all time. It's the sound of knocking wood! I'm not joking or trying to make a pun here. It's literally the sound of someone knocking on wood (a door?) that plays while the victim is being attacked by the killer. It's cheap, it's hilarious, and it actually makes this film more memorable.

There's another really important thing I'd like to point out. There are two versions of this film available on DVD. The first has an awesome soundtrack (just like I told you before) and the other doesn't have any music at all. That's why, if you get the second version, there's no song in the opening credits or music playing in the rest of the film.

Wait! I didn't mention the fate of the four campers and the killer...but who cares? You have more important things to enjoy like the bad acting, over-the-top death scenes and unintentional comedy. Check it out!