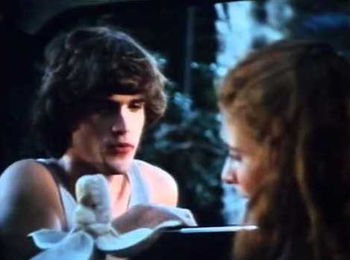 The eighties were a transitionary time for exploitation cinema. 1981’s Delusion (aka The House Where Death Lives) is one of the films that fell through the cracks. Perhaps it was hard to categorize, capitalizing, as it does, on both the mystery and horror genres. Flat, strange, and ambiguous, the film’s charms lie in subtlety and the mirror reflection of the curious world that it presents.

Newly hired live-in nurse Meredith (Patricia Pearcy) finds herself a witness to things she has questions about: namely a series of violent in-house murders. It’s a great, if often used, premise—and director Alan Beattie makes creative use of a stationary location: a well-appointed, obviously lived in secluded estate. But Delusion, narrated such as it is with Meredith’s plaintive voiceover, could be better.

A semi-nude sexual encounter, a curious room where an unseen family member resides, and a hanging dog are a few of the films’ “shockers.” Crafty, nicely photographed, atmospheric and accompanied by a good “mystery” score, Delusion, no cinematic masterwork this one, nevertheless does what it’s supposed to do: offer up a few distractions before the big final act reveal.