It goes without saying; you can't judge Def-Con 4 by its poster art! In the annals of post-apocalyptic films, Def-Con 4 is not the greatest. However, it is certainly not the worst.

We begin in a NORAD space station. The three-person crew is charged with securing North America (USA) with a hefty payload of nuclear warheads. They talk about getting laid, seeing their families, and spend their days finding ways to stay occupied for their respective "3 year" tour. The action starts when their computer monitors come alive with expanding "blips" of doom! Within minutes the Earth as they knew seems to be over. It appears there has been a Communist attack on North America, but they never received the order to fire. In the process, Howe discovers a missile headed directly at the satellite and the crew effectively destroys it with their own (sans one missile that failed to launch). After two months they start to lose it; they aren't sure what's left of their homes. Without warning their capsule deploys and they are sent on a crashing descent back to Earth. 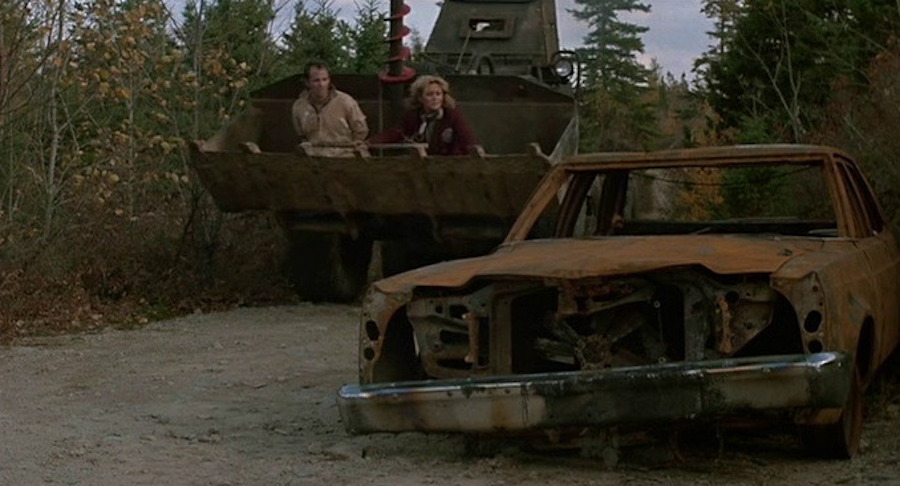 Once on the ground, the crew is forced to dig itself out of the capsule as it has landed on the hatch. Throughout the remainder of the film, we meet a host of doomsday characters including roving gangs of "kids" or "terminals" who are poisoned by radiation and have developed a taste for human flesh! Once on the ground, the remaining crew (one is lost to cannibals) becomes entangled with the politics of a makeshift colony of survivors who have devolved into a system of martial law and have confined themselves in a makeshift army compound replete with cages for those who don't follow the rules. It becomes obvious that the NORAD station was summoned by Gideon Hayes (King), the leader of the compound. He suggests to Howe that there is a last remaining "safe zone" in South America. This motivates each character to covet a nearby sailboat. All the while, a singular warhead ticks down to its last moments in the NORAD craft.

It's more likely that the art for this film sold more copies than the actors themselves. In all, Def-Con 4 delivers exactly what you'd expect from such a film. While it won't send you reeling, you won't regret sitting through this film at least once.