You ever see a film and love it so much that you wonder if someone made it just for you? As an avid fan of both post-apocalyptic films and THE Roger Corman, this film seemed gift wrapped for me! If you are expecting a sequel to Death Race 2000, you are in for a wonderful surprise.

So basically the world was destroyed in the great Neutron War, or so the narrator at the beginning tells us. All that seems to be left of humanity are three classes of people: the people who still live in the remaining cities, those who became range guides, and those who succumbed to nuclear fallout and became cannibalistic mutants. The range guides are like warriors with psychic powers. They don’t live in the cities with those they call “statesmen” because they are focused on being subject to none. But the tyrannical dictator of the largest city sees them as a threat to his ultimate rule and has as many of them arrested as possible. He then forces them to fight to the death in a game called Deathsport featuring laser-firing motorcycles. They capture a particularly powerful range guide who escapes with another and seeks to rescue a missing child range guide and keep the dictator from succeeding in his plan to take over another city for its rich fuel supply.

The classic elements of a great post-apocalyptic film are definitely in play here. We have the dessert exteriors as well as the industrial interiors to emphasize the post nuclear holocaust setting. We’ve got crazy dictators wearing a combination space suit and karate uniform. There’s definitely nudity and gonzo scenes that are too weird to describe (the wind chime torture room) as well as weird techno music. Not to mention an oil shortage, headbands, narrators telling us of the fallout, bad dialogue that makes you giggle, and motorcycles (aptly called death machines in this one). By the way, by the sheer number of motorcycles in almost every post-apocalyptic movie I have ever seen (Warrior of the Lost World, 1990: Bronx Warriors, 2020 Texas Gladiators, even Rollerblade Warriors), I’m assuming they must be the most durable vehicles ever conceived. If I ever sense the threat of globo-thermal nuclear war, I am building a shelter entirely out of motorcycles. 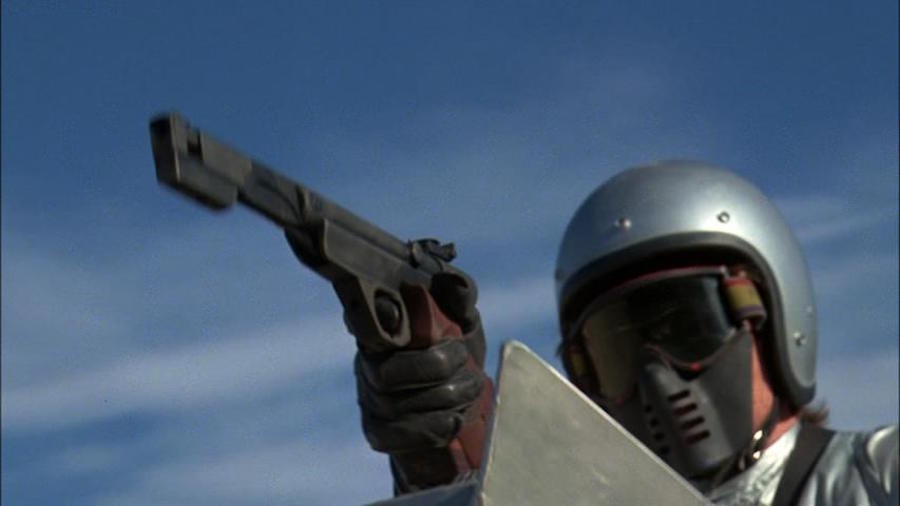 I really liked the motorcycle action sequences. I thought they were very good for a film like this and I was impressed with how little the filmmakers deviated from the action; displaying an understanding of the type of film they were making. The motorcycle scenes within the actual Deathsport game are really fun. There are heads being chopped off, lasers firing, and people catching on fire (another staple of the genre I overlooked a moment ago). I also found it hilarious that in the final showdown between Carradine and the diet coke version of Rutger Hauer (Richard Lynch) there isn't a single shot of either actor actually touching his sword to the opponent’s sword. It’s all quick cuts, jumping to avoid the blade, and sound effects. Why? Because they didn’t want to break the glass swords; no money in the budget for surplus crystal swords! Riotously funny!

Another thing I really dug about this film was the inclusion of the cannibal mutants. I have seen other post-apocalyptic films touch on this subject but this was a more interesting approach. The mutants were nothing more than zombies with Raul Julia’s enormous eyes. They growled and swarmed and devoured human flesh but they just weren’t ever dead. It was fun to see actual zombies in a post-apocalyptic film even if they were using the same giant plastic eye effects as the 50’s b-movie Killers from Space. I also thought it was funny that there was a scene where a zombie is driven back by fire even though he is carrying a torch himself. Hilarious!

What was really interesting here was to see Corman’s wily film marketing strategies at work. Corman was not a guy known for putting a great deal of emphasis on quality and that's what has made him such a notorious grindhouse director. Corman was hoping to bank on the enormous success of Deathrace 2000 by using it as a lure to get people to the theaters. The film is called Deathsport, even though the actual Deathsport game is a tiny, tiny story element. There is literally only one short scene depicting the game and then it is never spoken of again. But the taglines for the film, the lines that would have been all over the posters, paint it as centering on the gladiator-type fight to the death (one even saying that it is not just a game, but the only way to survive). You gotta love Corman whoring out his own work to trick people to see his other films. It’s the same mentality behind the Italian Knockoff Films I love so much. Speaking of knockoff, listen for the unmistakable Star Wars sound effects in this movie.

This is a movie for fans of this genre, but I think if you are the sort of person that really enjoys movies that are fun to watch BECAUSE they are bad and not DESPITE their badness, this film will appeal to you. I urge you to see this with friends and beer; again testament to this film’s appeal to me.