< Dawn of the Mummy

Egypt 3000 BC... The tremendous Pharaoh Safiroman dies. He gets mummified and the tomb is cursed by a high priestess. So if someone comes and steals the gold of the Pharaoh, he and his army of the undead will return to take revenge. Not only on the graverobbers but on the whole population!

Egypt Present Day...Rick (Barry Sattels) and two of his Egyptian buddies are looking for the tomb of Safiroman to (what else?) steal the gold. They find the cave quick. An old lady shows up (with bad teeth) and tries to warn them about the curse, but of course they don't listen. The gold is not easy so easy to find. Suddenly some Americans show up (a group of models and a photographer). They find the tomb too and wanna shoot their pics inside it and around the mummy. Rick and his buddies don't like that. Sometime later they find the gold and suddenly a whole army of Zombie-Mummies are on the loose to kill everyone. 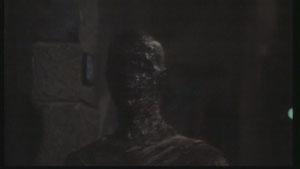 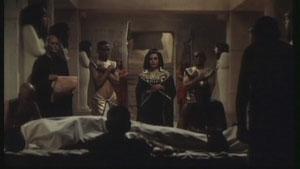 There are not many Mummy films out in the exploitation business. I really have none in my memory right now. This movie is not that bad and not that good. Somewhere in the middle. I like the make up effects, which were done by Maurizio Trani who also did the effects in Zombie Holocaust (1980). The Mummies look good and the gore scenes too. But this is only recommended when you turn your TV on and the film plays while you zapping through the channels. Damn, I need to remove my gauze bandages now. Over and out!