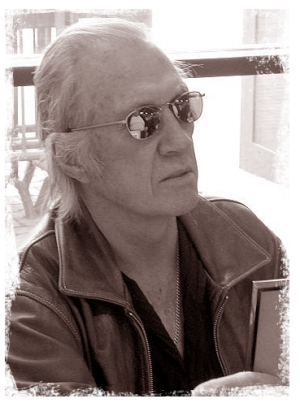 David Carradine (December 8, 1936 - June 3, 2009) was born John Arthur Carradine in Hollywood, California, the oldest son of Ardanelle Abigail (née McCool) and noted American actor John Carradine. He is the brother of Bruce Carradine and half-brother of actors Keith and Robert Carradine, as well as the uncle of Ever Carradine and Martha Plimpton. Carradine has Irish, English, Scottish, Welsh, German, Spanish, Italian, Ukrainian and Cherokee ancestry. Carradine studied drama at San Francisco State University before working as an actor on the stage as well as in television and cinema. He changed his given name to David after starting his acting career.

Carradine rose to public popularity in the 1970s when he took the role of the half-American/half-Chinese shaolin priest Kwai Chang Caine on the hit TV series Kung Fu (1972-75). After Kung Fu went off the air, David starred in several exploitation films for New World Pictures including Death Race 2000 (1975) and Cannonball (1976). These are now considered cult classics. In 1976, Carradine played legendary folk singer Woody Guthrie in the biopic Bound For Glory. It was one of his best performances and a great film directed by Hal Ashby. After a period of doing smaller projects, Carradine was brought back into the bright spotlight when he was cast as the diabolical master assassin "Bill" in Quentin Tarantino's modern exploitation-revenge epic Kill Bill (2003-4). During his time on the set of Kill Bill, David kept a journal and later released a book about his journey.