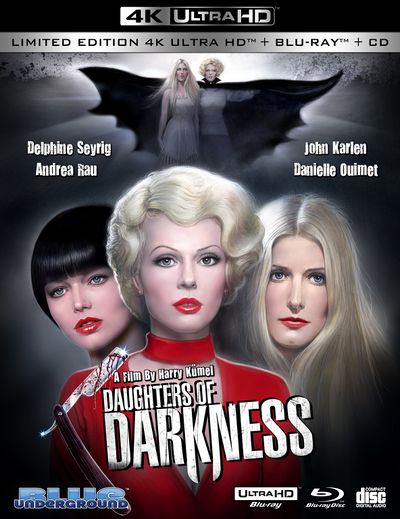 Review of the 1971 Belgian-French-German co-production of "Les lèvres rouges" by Harry Kümel, more widely known as Daughters of Darkness, as released by Blue Underground on 4K UltraHD BluRay and BluRay.

Stefan Chilton (John Karlen of TV's Cagney and Lacey) and his new fiancee Valerie (Danielle Ouimet) just got hitched in Switzerland and they are on the way to his home in England. Missing their flight, they stay in the beach resort town of Ostend in Belgium, which is deserted during the winter time. They take the presidents suite in the main hotel, and wonder who the only other guests are: a strange female couple. One is the Countess Elizabeth Báthory (Delphine Seyrig of the Day of the Jackal), the other her servant Ilona (Andrea Rau). Pierre, the Hotel clerk (Paul Esser) is creeped out the by the countess, who looks just like the countess of the same name that frequented the hotel when he was still a kid. Her assurance that she may just be the daughter sounds plausible, but not reassuring.

The mysterious, strikingly beautiful countess and her aide intrigue Stefan, who is not in a hurry at all to introduce his new love to her in-laws. As he experiences episodes of rage, they learn of a series of gnarly murders in nearby Bruges, that a local retired policeman (Georges Jamin) is investigating. He is more titillated by all the talk of murder and torture, than worried, while his fiancee is creeped out the by the countess from the start. While Ilona is making a move on him, the countess and Valerie make another successful attempt at becoming friends after all. Valerie's erstwhile attempt at fleeing, ends up in a violent outburst by Stefan... but then the tables turn, and some shocking events make him the one worried, and his better half the new serf to the ominous countess....

The movie is like an almost artsier, slower and not quite as sleazy version of Vampyros Lesbos, but you have to be honest: Kuemel is no Jess Franco. Daughters of Darkness has all the markings of a sleazy exploitation flick, but it never quite manages to make up its mind whether to pull out the stops or just lose itself in atmospheric shots of a beach hotel during wintertime. While the first half is acceptable in its slow pacing, slow burn buildup, and the ominous nature of it all, once it gets to that point where the audience expects shit to happen - it doesn't, really. 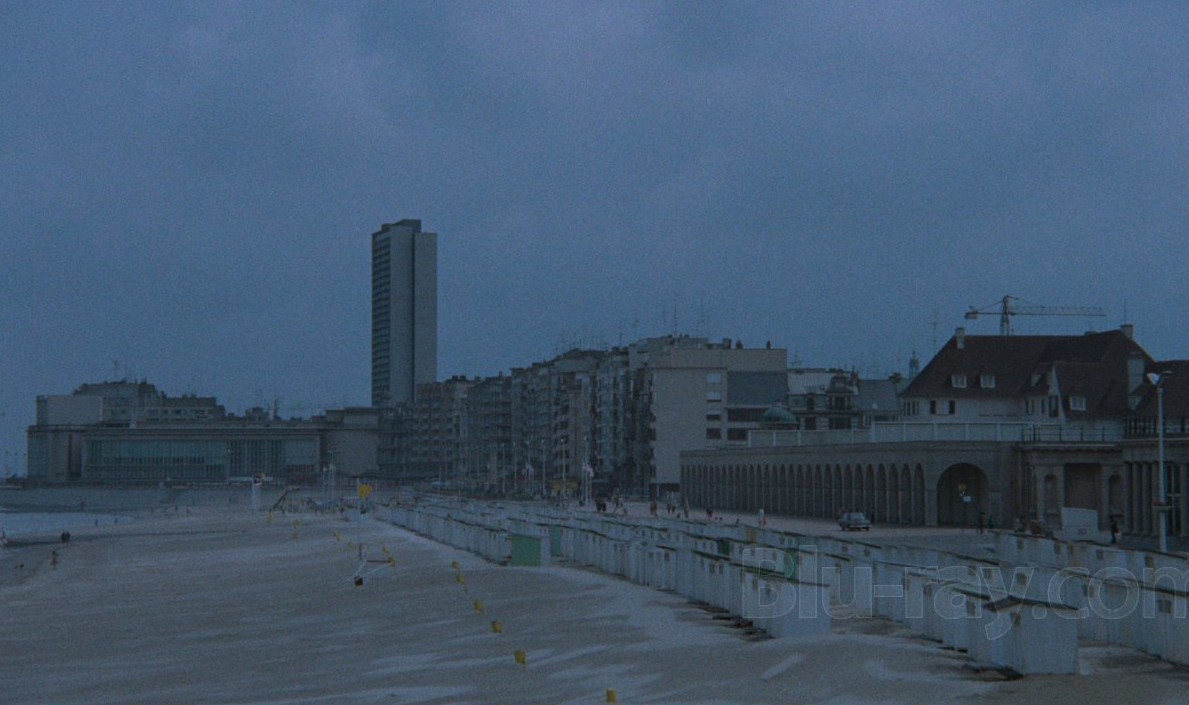 There's all the nudity and chauvinistic violence from the very start, don't worry about that, but other than some ghastly accidents that seem to be brought about by dark magic, nothing is happening in this movie that actively show vampirism, murder or... dark arts or anything. Now, you could say that this is in fact the genius play here: a 100 minute insinuation of vampire sensuality wreaking havoc among people in a subversive kind of way. But for a movie, it ends up feeling a bit like they let the air out of the balloon towards the end. Not to mention the useless cop who feels like something left over from polishing the screenplay the night before shooting, and nobody could bring himself to fire the guy.

What's great to watch is Seyrig, who plays the vamp queen in such a way that it's almost as if she's wearing a tacky "so what I'm a vampire, get over it" shirt. The vibe she gives off is so inconspicuous, it's even creepier than anything else. It's a delicious portrayal that you rarely get to see. And am I the only one who thought the entire setting was a bit reminiscent of Four Rooms, and Stefan and Valerie being a bit like Roman Polanski and Sharon Tate? Polanski, after all, made a vampire film not too long before this one came out. The other cast is not so exciting, with Chilton mostly being a rubber face and Ouimet being a mostly cardboard scream queen, there's nothing that stood out for me here. 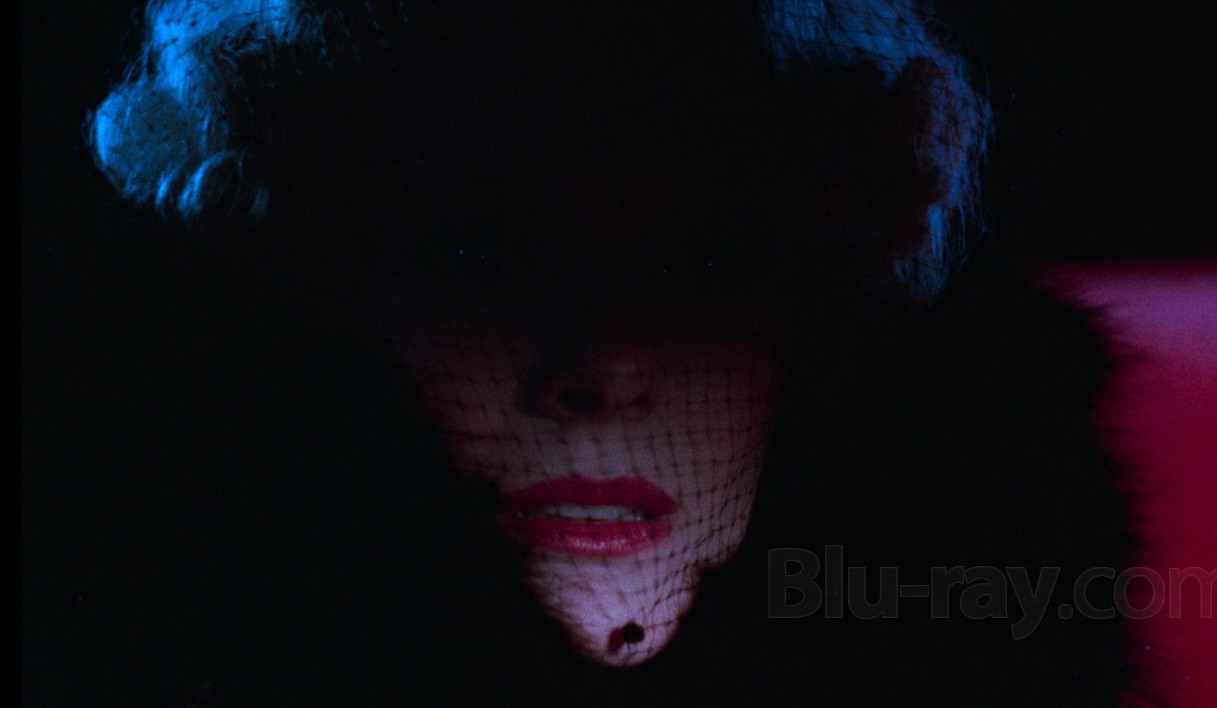 The music, as subtle as it was, worked rather well. So did the cinematography, which made quite a lot out the mostly empty set pieces, the bad weather and the minimalist material that the script brings to the table. Harry Kümel I think took a stab at a pseudo-erotic horror film in the vein of the artsy style of the time, and he succeeded. He overshot his goal a bit, though, inadvertently probably creating a cult favorite, but also missing the average exploitation target audience appetites a bit by over-artsification. Daughters of Darkness is quite an experience, and even though it movies slow, has script weaknesses and not the best casting, viewers will still get a kick out of it.

Blue Underground presents this movie on another gorgeous looking Ultra-HD BluRay disc, where the restoration can really shine. Even though I lack a full on 4K equipment, it really looks more than amazing. Granted, there are scenes, shots and moments that lack the crisp high definition details of others, but such is the deal with older material. Overall, the transfer look up to Blue Underground's own high standards - but it doesn't rank among their reference quality discs I think. Still, it boasts Dolby Vision HDR so if you're equipment can handle this level of color and contrast, you'll be in for a treat.

As for audio, I opted for the English Dolby Atmos track (even though my system doesn't quite get there), and it is impressive. Not as impressive as on other releases, but remarkable the depth and partial stereo effects they tickled out of the original material. You also have a choice of a 5.1 DTS-HD MA track, but the difference I should say is not all that much. To hear what this movie used to sound like for the last few decades, opt for the (cleaned up) mono tracks in English or French that are included as well. 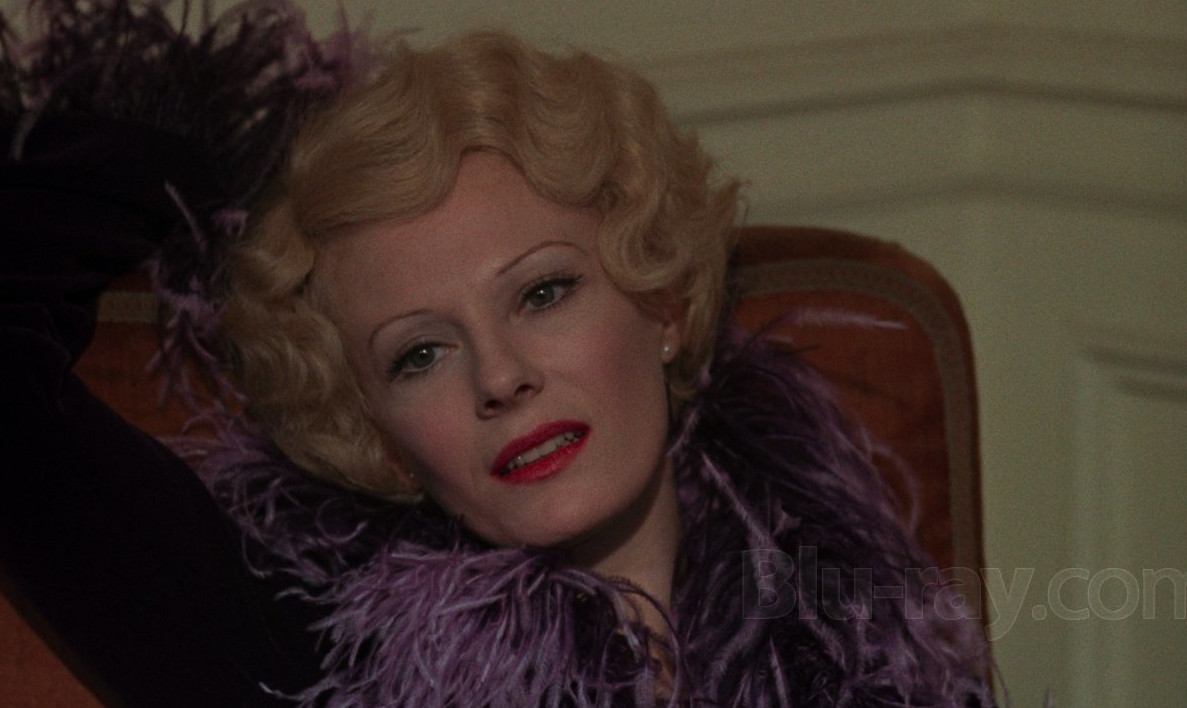 There are subtitles options in English (SDH), French, Spanish or English (for French audio).

Let's get to the extras, where this release is another one that's just chock full of goodies (some of them new for this edition). First off there are not one, not two, but three audio commentaries. The first is with Harry himself (moderated by David Gregory), the second is with John Karlen and Journalist David Del Valle, and the third one with genre expert Kat Ellinger, author of, among other things, Devil's Advocates: Daughters of Darkness. If you're just going for one, I would say the third offers the most insights about the movie, with Kat really being one of the go-to experts on this of course, while the others offer more insight into the movie, if you know what I mean. Understanding what makes the often overlooked Kümel tick is of course a plus in understanding the movie, and his presentation is entertaining and detailed.

There are three quite interesting interview featurettes on there, as well. The first runs 22 minutes and is with Kümel and co-writer and co-producer Pierre Drouot. The second is with actress Danielle Ouimet and runs 15 minutes, the third is with actress Andrea Rau and goes eight minutes (German with English subtitles). 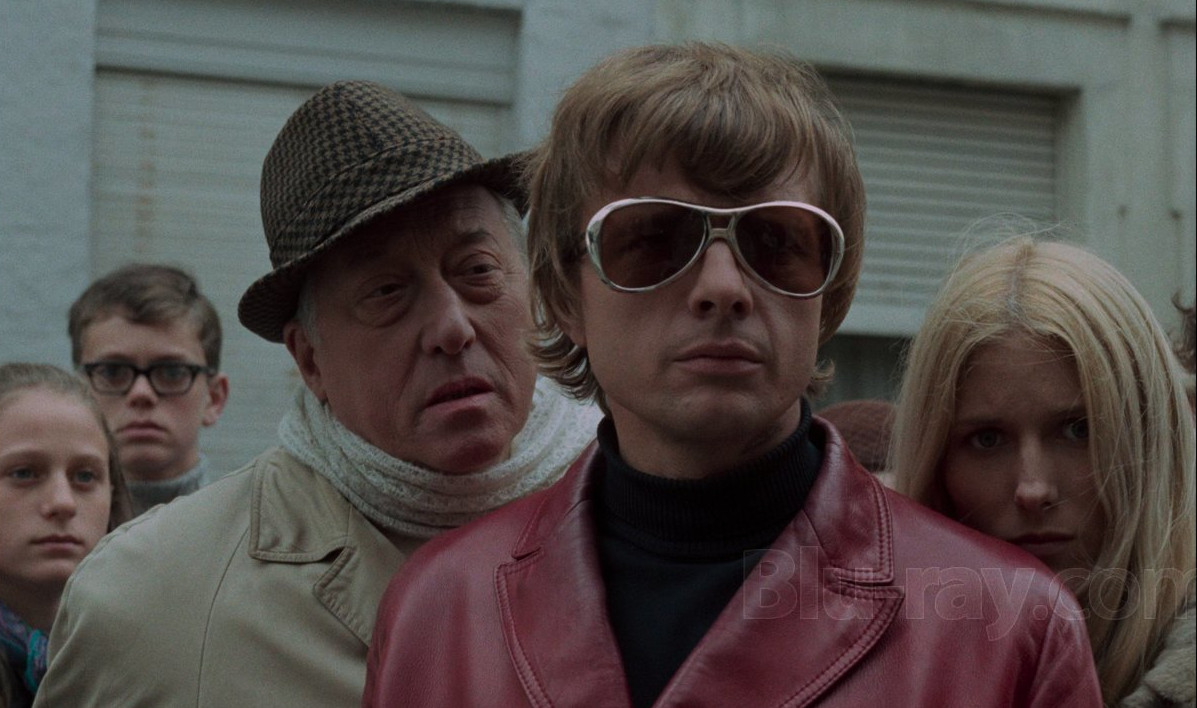 There are three trailers, four radio spots, the alternate US main titles and a poster and still gallery. This limited edition three disc set also offers the film on regular (region free) BluRay, a compact disc with the original soundtrack by François de Roubaix (if you're into that) as well as an extensive booklet with rare pictures and an authoritative text by the always reliable Michael Gingold.

The verdict? Another stellar Blue Underground release. Daughters of Darkness looks and sounds great on this, and comes with more extras than expected. A very solid package for a flick that few people are aware about. Another fine release from the label.

The disc was provided by the distributor. Screenshots courtesy of BluRay.com