Wow! Where do I begin? Have you ever wondered what a live action Ralph Bakshi cartoon would look like (and no, I don't mean COOL WORLD)? Here you go! This has to be one of the most off-the-wall, irreverent, un-P.C. movies I've ever had the pleasure of seeing...and I saw a TV cut of it (only lost a few curse words). 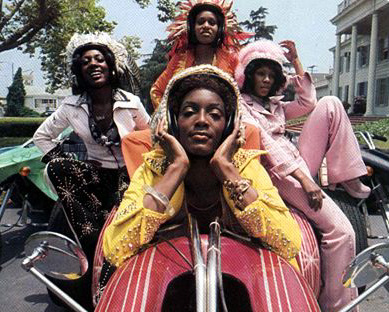 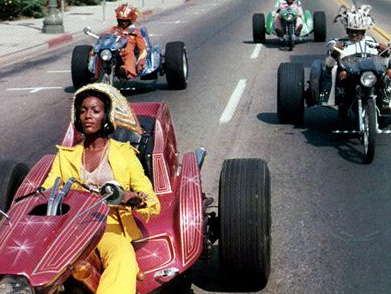 Syreena (Trina Parks) and her motorcycle (really oversized tricycle) gang pull into town and get in to a scuffle with a few local Aryans at the local BBQ joint and hilarity ensues. The police pull up (one of which is Joe Dante fave Dick Miller) and attempt to arrest our heroines, but they won't have none of that. The girls escape and hook up with a rival male gang and more hilarity and PG-rated sexual hijinks occur. Syreena goes to visit her brother (who thinks he's Jim Kelly in Enter The Dragon) and knocks the front of his house down by karate-ing it(?!?). Then there's Cross (Norman Bartold), who runs the local BBQ pork chain who may or may-not have kidnapped Syreena's mom Cinderella (Frances E. Nealy) because she was operating an abortion clinic and knew he was actually in league with the Klan. Cross has been playing nicey with the local African American dignitaries so he can finance his own scheme of taking over the area (for what, I have no idea). Syreena gets wind of this and sexes her way into Cross' mansion (seems the old coot has a nasty case of Jungle Fever), finds her Mom and attempts to take down Cross with her gang of motorcycle mamas. 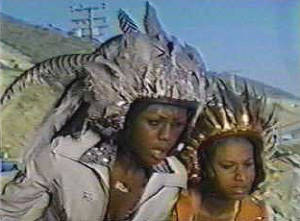 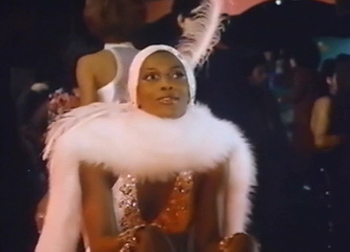 I've seen a lot of crazy sh@t in my day, but Darktown Strutters just might take the cake. It's completely off the wall and an acquired taste for sure, but it kept me glued to the TV while watching it and I could only imagine what grindhouse audiences must have thought about it back in the day. The girls in the gang are downright gorgeous, but there's not an ounce of flesh on display (it was originally rated PG). The violence is cartoonish and so are the sets and costumes, which makes you wonder just who this flick was aimed at. There's a lot of sexual innuendo, but nothing worse than you see on prime-time TV. Some of the set pieces, like the "Potsicles" factory, Cross' gang of cronies dressed like pigs, the over-sized mars light on the squad car (are they the only cops in this town?), and the crosses strapped to the back of the Klan members bikes are hilarious and highly original. It's obvious a lot of creativity went into the film, despite its meager budget and questionable origins. I couldn't even begin to contemplate the perfect double feature film to play with this movie - it's just that original and unique. While not the best movie I've seen in the genre (I wouldn't call it Blaxploitation, but I'm guessing that's why the film was made), it's definitely the most head-scratchingly fun time I've had in many a moon and I heartily recommend it to anyone seeking out something REALLY different. Just don't expect a lot of violence and sex usually associated with the genre or you will be highly disappointed. (Review based on the EastWest DVD available through Amazon.)