Like a holy grail for slasher film fanatics, Curtains has been the topic of ravenous internet buzz amongst genre fans since horror film archive The Terror Trap started a DVD release campaign a few years back. Many have scoured the net for time-weathered VHS copies or hoped that it would pop up on bit-torrent sites or YouTube, praying for mere moments of footage of this forgotten masterpiece.

After giving up hope on a DVD release, I decided to invest my money into a Vestron VHS print missing its original cover art and available for a cool $6.95 plus shipping on eBay. I took the risk on a Blockbuster rental with a taped-on sticker and a dust coating that must have been on it since the mid-80s. The question is... did the risk pay off?

Thankfully, I made a wise investment. Curtains is a spooky little number, despite some glaring plotholes and other forgivable flaws (lack of character development!). When it tries to be, it's nail-bitingly tense, featuring atmospheric, daylight murder sequences and an unbelievably frightening slasher (decked out in the creepiest hag mask since Terror Train). Yes, the film is totally lacking in narrative drive, but its suspenseful moments are enough to keep it afloat.

When screen starlet Samantha Sherwood gets locked away in a sanitarium, her scheming director decides to invite six sexy actresses to his ski chalet in hopes of selecting a replacement. Too bad Sherwood doesn't plan on giving up the part that easily and she's sneaking out of the home just in time to ruin the director's weekend plans. 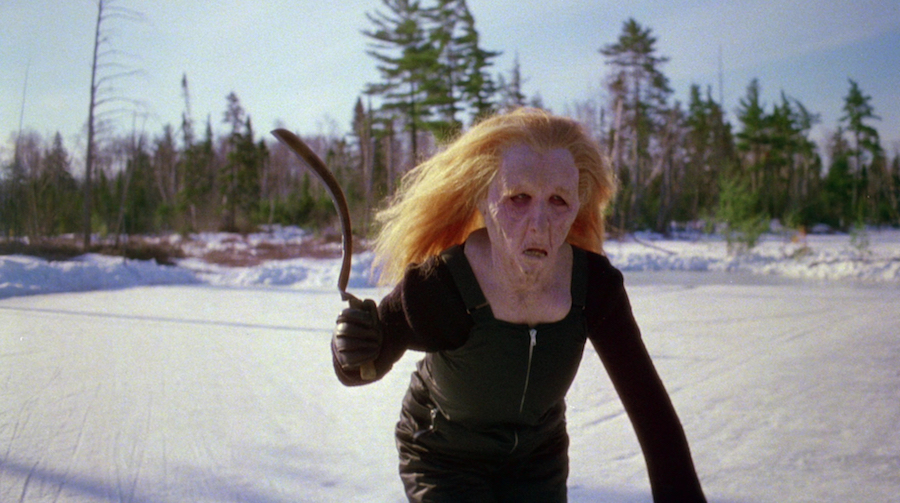 Although many of the characters are shamefully underwritten (a servant boy is only shown twice; once as an introduction and again as a corpse), the leads seem to be having fun with the material. Samantha Eggar has always had a taste for this type of film and she makes Samantha sexy, dangerous and self-assured. John Vernon also seems to be in his element, playing Jonathan Stryker (the director; also the name taken by actual director Richard Ciupka due to production problems) as an insufferably pretentious ego maniac who somehow manages to end up in bed with nearly all of the cast. It's also nice to see Black Christmas' Lynne Griffin as a comedienne desperate to be taken seriously and Funeral Home's Lesleh Donaldson as a teen looking for a big break, but coming to a tragic end in the newly fallen snow.

Speaking of said snowy sequence, you won't believe how tense and frightening horror can be in the sunlight. As the young actress prepares for a relaxing morning of ice skating, a determined maniac skates at full speed towards her, wielding a sickle and wearing a mask of what must be the ugliest old lady on planet Earth. Although the girl makes it off the ice, she was wounded by a small slice from the sharp, hooked weapon and is eventually tracked down and slit from ear to ear. It's fascinating how the peace and solitude of the woods can be just as isolating and creepy by daylight.

Another great sequence takes place in what seems to be a stage full of old props and set pieces. As one of the actresses (she barely had enough screen time to elicit the use of her name) runs in fear through a seeming endless hall of mannequins, she is chased by the masked figure, eventually getting dragged into the ventilation system and stabbed to death.

Although effective on its own, this sequence did suffer a bit due to the print quality. This is a film that occasionally relies on dark, shadowy hallways and corridors, which are often hard to see on the VHS copy, YouTube bootlegs and, per internet reports, the official UK DVD. That being said, it's hard to make a definite statement on a feature that can barely be seen for its final 20 minutes. One can only hope that a nice DVD transfer is on its way, so that the visual palette can be fully realized.