Curse of The Werewolf

Curse of the Werewolf (1961, UK) is a Werewolf film directed by Terence Fisher. 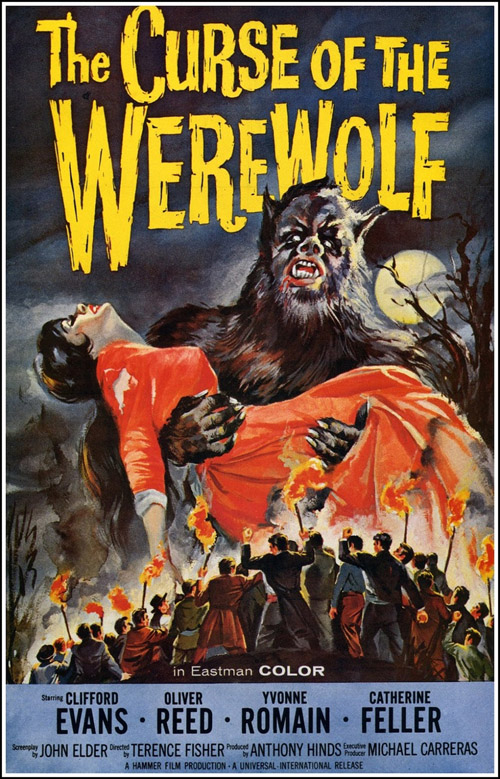 The story is set in 18th Century Spain. A beggar is imprisoned by a cruel marques after making inappropriate remarks at the nobleman's wedding. The beggar is forgotten, and survives another fifteen years. His sole human contact is with the jailer and his beautiful mute daughter (Yvonne Romain). The aging, decrepit Marques makes advances on the jailer's daughter while she is cleaning his room. When she refuses him, the Marques has her thrown into the dungeon with the beggar. The beggar, driven mad by his long confinement, rapes her and then dies. The girl is released the next day and sent to "entertain" the Marques. She kills the old man and flees. She is found in the forest by the kindly gentleman-scholar Don Alfredo Corledo (Clifford Evans) who lives alone with his housekeeper Teresa (Hira Talfrey). The warm and motherly Teresa soon nurses the girl back to health, but she dies after giving birth to a baby on Christmas Day (a fact that Teresa considers "unlucky" since the child was born out of wedlock). Alfredo and Teresa raise the boy, whom they name Leon. Leon is cursed by the evil circumstances of his conception and by his Christmas Day birth. An early hunting incident gives him a taste for blood, which he struggles to overcome. Soon, a number of goats are found dead, and a herder's dog is blamed. (Wikipedia)