In the mid to late 40s, the supernatural gothic horror film that Universal Studios pioneered began to fade away. In its place, Hollywood embraced atomic age creature features and paranoid science fiction, all of which became wildly successful. In the late 50s, when this new form of horror was reaching its peak, British film company Hammer Studios took a chance and revived the gothic horror film, giving Frankenstein’s Monster, Dracula, and the Mummy a Technicolor makeover. The first film from Hammer was 1957’s The Curse of Frankenstein, a soft-focused melodramatic horror film that was dripping in blood and sexuality. While The Curse of Frankenstein can’t compete with the Boris Karloff/James Whale classic, the film takes more of a psychological approach to Mary Shelley’s material and boy, is this one spooky vision. Certainly a film that is Halloween appropriate, The Curse of Frankenstein doesn’t hope to milk most of its horror from Frankenstein’s ghoul but from Baron Frankenstein himself, a monstrous man of science who will stop at nothing to complete the ultimate experiment. Still, the Frankenstein Monster is one that will haunt your dreams, a horrible scarred freak that wanders the woods and kills anyone that dares cross its path.

Our story begins in a dank prison where a gaunt Baron Victor Frankenstein (played by Peter Cushing) is awaiting execution for a grisly murder. A kindly priest visits the imprisoned Victor, who then listens to his bizarre confessions. The story then flashes back to when Victor was just a young wealthy orphan and he meets his mentor, Paul Krempe (played by Robert Urquhart). The two bond instantly and as Victor grows up, the two work side by side on a groundbreaking experiment that can restore life to the dead. The two manage to bring a small dog back to life, a success that sparks a horrifying determination in Victor to restore life to a human corpse. Ignoring Krempe’s pleas to continue their research before trying to raise a human corpse, Victor begins grave robbing and putting together a hellish creation. As the construction continues, Victor even resorts to murder to obtain the brain of a genius for his monster. Despite the brain being damaged, Victor manages to restore life to the corpse and creates a creature (played by Christopher Lee) that isn’t the genius he hoped, but a bloodthirsty murderer with little emotion. After the creature escapes from Victor’s lab, it wanders into the woods where it stumbles upon local villagers, all who are horrifically slaughtered. 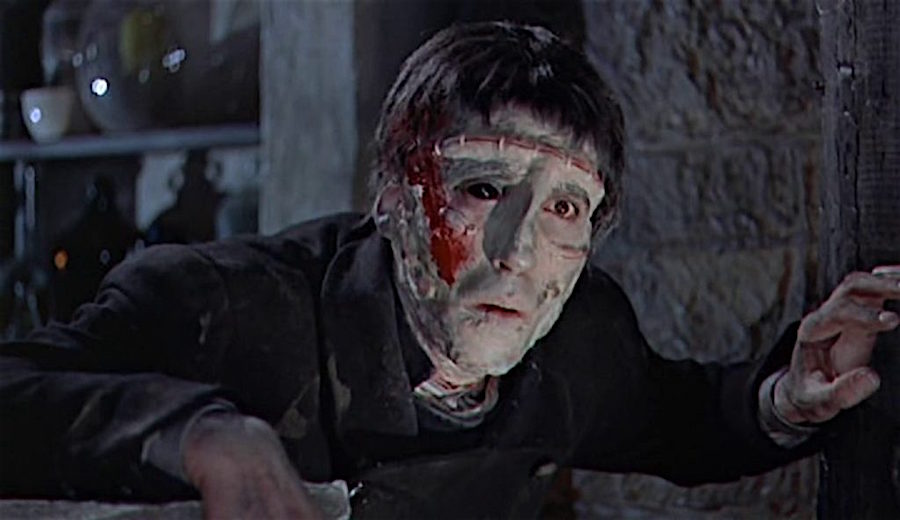 While the addition of color allows us to get a clear glimpse of Frankenstein’s grotesque creation, the film also repulses us with plenty of detached limbs, rotting eyeballs, severed heads, and oozing wounds. More grotesque than the Karloff monster, Lee’s abomination isn’t nearly as sympathetic as what Universal came up with, something that makes him less memorable than Karloff. You still have to give Lee’s monster credit, he does have a startling appearance and his blank stare kills certainly do make your skin crawl. A confrontation between him and a terrified blind man is certainly a sequence that will have even the most hardened horror viewer holding their breath. The monster is only given a small amount of screen time, something else that hurts the growth of his character, and Lee is forced to just swing his arms around in a fury and look confused for a good portion of the film. He is creepy as he wanders the autumn landscape and surveys the gothic architecture around him. Yet most of the fear is tapped in Frankenstein himself, an even more terrifying force that makes the monster look tame by comparison.

The cold-hearted scientist is certainly the true monster of The Curse of Frankenstein, one that holds you in suspense for a good duration of the runtime. While Colin Clive played Frankenstein as a man who has bitten off more than he can chew, Cushing’s Frankenstein is a man filled with hellish determination. He is sweet as sugar to his fiancé, Elizabeth (played by Hazel Court), who is oblivious to his steamy encounters with his maid, Justine (played by Valerie Gaunt). We get the feeling that this affair will not end on civil terms and it does take a turn for the nasty, especially when Justine reveals serious news to Victor and pleads for marriage. It is also difficult to watch the friendship between Frankenstein and Krempe deteriorate into a bitter relationship, with Krempe constantly pleading with Frankenstein to end this madness. While Clive’s Frankenstein is celebrated more than Cushing’s, the better of the two will always be Cushing. At times, he can be incredibly charismatic and even charming but in the blink of an eye, his gentlemanly charm is undercut by a sinister meeting with a mortician for a pair of eyeballs. Krempe is ultimately the subtle hero of The Curse of Frankenstein, the voice of reason who puts the monster down once and then frustratingly disappears from the terrifying climax.

Made on the cheap, The Curse of Frankenstein doesn’t have the grand fiery ending that Universal’s Frankenstein has. The film has a bit more of a personal climax, one that, yes, does end with flames and a vat of acid (in place of a windmill), but with hints that this may all have been in Victor’s head. Could it be that the monster never existed at all? Quite the creative spin on the legendary material! The minuscule budget does force director Terence Fisher to really focus on character development and allow it to take center stage. He also does a fantastic job creating a spooky atmosphere with very little. The most detailed set is certainly Frankenstein’s boiling and bubbling lab, cramped and confined when viewed next to the stone structure seen in Universal’s Frankenstein. While it certainly isn’t perfect and there is just too little of Lee, The Curse of Frankenstein belongs to Cushing and that inauspicious gothic mood. The ending is certainly grim, with madness running amok (just get a load of that final image). It does send the viewer off shaken and that is all that many can ask of a good horror movie. Overall, if you’re not really in the mood to revisit Universal’s legendary classic for the 50th time, seek out this Technicolor nightmare on Halloween night. It may have you switching on a nightlight or two.