Ethel Janowski is recently released from a psychiatric institution and placed into the care of her grandmother. Dr. Gerard encourages Mrs. Janowski to help Ethel lose some potentially lethal weight; but unfortunately, Grandma’s decision to lock the kitchen cabinets turns out to be a fatal solution to curbing Ethel’s eating habits.

After discovering the kitchen locked up tight, Ethel flies into a rage, hacking away at the padlocked cupboards with a huge butcher knife. Alarmed by the noise, Grandma rushes in and starts berating her hefty granddaughter about her expensive eating habits and the havoc it wreaks on her carefully budgeted Social Security checks.

Ethel attacks grandma to obtain the only key to the cupboard, which Grandma clasps tightly in her fist while skirting away from Ethel’s wrath. While a mournfully sonorous and simple, yet effective, soundtrack dances behind the carnage, Ethel stabs Mrs. Janowski in the back and hacks away furiously at her fist while yelling in time to her deadly knife blows, “I - Want - That - Key!” until the coveted key is relinquished.

Now happily content with cupboards unlocked and a box of Nilla Wafers tucked beneath her arm, viewers join Ethel as she deals with a series of troubling intrusions that threaten her simple, if twisted, desire to be left alone to eat, sleep, and watch television. Unpaid grocery delivery bills, nosy detectives, and Ethel’s loser sister Rosalie and her mooching pimp/boyfriend, all present predicaments to which she feels the only remedy is a barrage of knife blows, strangulation, or attack with a nearby heavy, blunt object.

The vein of black humor running through the movie provides Priscilla with opportunities to showcase her broad range of acting prowess, effortlessly meeting the challenges of interpreting the many instances of low-key humor that arise when her character attempts to rid herself of the increasing amount of bodies occupying her home.

Actress Priscilla Alden showcases a wide-range of acting nuances within a deceptively simple plot; she first goes into action to deal with unwanted intruders, and then deals with the problem of disposing of the rapidly multiplying and decaying bodies stowed inside her house. Under a lesser talent, Criminally Insane would certainly fail due to its lack of excessive gore, nudity or likewise exploitable content usually sprinkled liberally throughout low-budget genre movies to cover for their lackluster acting, low-budgets and tawdry sets. That’s not to say there isn’t a smattering of very-bright stage blood tossed about during the killings - but the murders never take center stage - even though they are very effective and smartly executed; unfolding in oddly tranquil scenarios, reflecting Ethel‘s unsettingly calm composure while dispatching her victims.

Priscilla Alden imbues Ethel with a restrained range of psychosis that manifests itself in both comic and grim scenarios that propel the movie forwards like some morbidly entertaining Warner Brothers cartoon. Ethel’s series of misdirected adventures while attempting to rid herself of any incriminating evidence, end up laughably disorganized in execution, not unlike Wile E. Coyote or Foghorn Leghorn and their unsuccessful dealings with gregariously cunning antagonists.

Other noteworthy performances are provided by Michael Flood and Lisa Farros as Ethel’s prostitute sister Rosalie, and her equally sleazy boyfriend. These two slink around Ethel’s house, taking full advantage of an extra bedroom while helping themselves to food and lodging. Making-out, snorting cocaine and bickering in front of Ethel becomes a daily routine that tarnishes her evening television and snack ritual. After Rosalie threatens to break down the upstairs bedroom door to alleviate the incredible smell coming from behind it, Ethel decides they must depart. In the films most effective kill scene, Ethel hacks the boyfriend to death while he’s asleep in bed next to Rosalie; the noise jolts Rosalie awake, and she finds herself cowering beneath Ethel, who towers above her with a huge, bloody cleaver while her boyfriend gasps for breath in a pool of blood besides her. After dispatching Rosalie, Ethel turns to discover that the boyfriend has hauled his bloodied body down the hallway; she quickly stops him, standing above his shoulders while chuckling contemptuously at his plight before delivering several more blows from her meat cleaver.

Director Nick Millard previously released a series of softcore/hardcore movies before unleashing this low-budget classic. Millard obviously has experience squeezing the most out of low-budget productions and limited locations due to his previous sex films, a genre infamous for needling little in the way of intricate sets or large budgets. An amusing what-will-happen-next plotline is executed almost entirely in one small row house in a suburb of San Francisco. Millard side-steps the expense of showcasing exploitable make-up effects shocks by allowing them to take a backseat to his entertainingly capable main character.

Ethel’s withdrawn schizophrenia is perfectly mirrored within the tight confines of her Grandmother’s San Francisco neighborhood; a jumble of closely-knit row houses which force Ethel into interactions with neighbors and passersby; individuals dangerously close to discovering the horrors locked just steps away from their own homes and families, who innocently offer words of advice while observing Ethel in the midst of executing her bungling acts of subterfuge.

One grocery delivery boy, her grandmother, a nosy detective, a persistent “customer” of Rosalie, the inquisitive Dr. Gerard, Rosalie and her boyfriend, all meet the business end of Ethel‘s master plan, ending up piled into an upstairs bedroom. Eventually, the stench threatens to make Ethel’s ideal home life unlivable, and the movie concludes with Ethel finally discovering a system that helps her get rid of the grisly evidence - a final satisfying twist that closes the book on the wild adventures of one Ethel Janowski, her quest for solitude, home-made food, and a little TV. 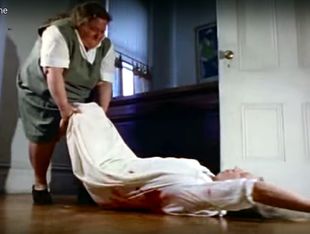 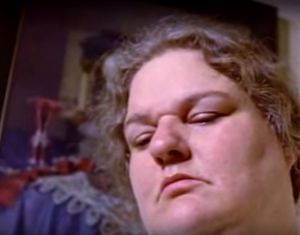 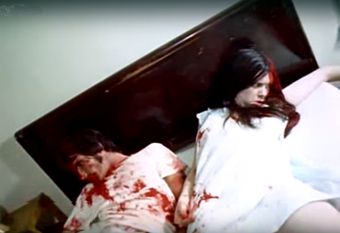