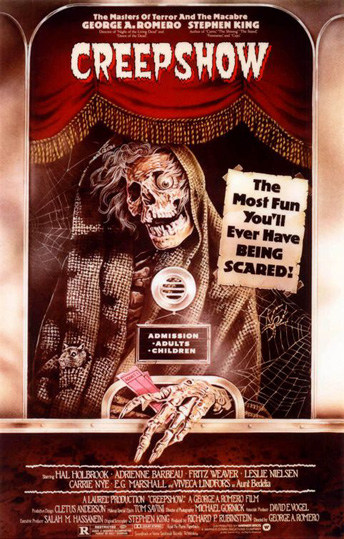 Creepshow is a great collaboration between three horror masters Stephen King, George A. Romero and Tom Savini. The screenplay was written by Stephen King, the man responsible for countless horror classics, including: the "Shining", "It", and "Maximum Overdrive". Creepshow is directed by George A. Romero, the man behind the "Dead" series: "Night of the Living Dead", "Dawn Of The Dead", etc. Tom Savini created the special effects for this movie as well as the unforgettable movies "Friday The 13th", "Dawn of the Dead", and From Dusk Till Dawn. With such a great collaboration of horror masters how could the movie be bad? The answer; it isn't. The movie is a cult classic and most problems you can find in the movie are intentional. "Creepshow" is based on the E.C. horror comics of the 50's. The same comics that the TV show "Tales from the Crypt" was based on. The movie and the show bear a striking resemblance understandably.

The movie is like five "Tales from the Crypt" episodes rolled together. The movie takes its stories directly from the comics and does a great job following them and paying tribute. The movie incorporates the comic book style as well, changing from panel to panel and even changing from a drawing to the actual footage doing a very good job of being accurate. The movie is great celebration of the source material and even shows off the advertisements and other attachments found in the comic, showing a definite love of the source material.

As said before, the movie contains 5 short stories, as well as a segment at the beginning and the end with a kid reading the comic. The stories are "Father's Day", "The Lonesome Death of Jordy Verrill", "Something to Tide You Over", "The Crate", and "They're Creeping Up On You". Tom Savini also has a small role as "Garbage Man #2" in the ending segment with the boy and the comic. Tom Savini has small roles in many of the films he has worked and also has many small roles in horror movies where he almost always dies early in the movie. Danny Trejo has a similar theme of showing up in horror movies for a short part, and usually dying in the end.

The first segment is "Father's Day" This segment is not that good, in fact it would completely suck except for one thing: Tom Savini's zombie. The plot is that a horrible old man is killed by his daughter on Father's Day, years later when she is visiting the grave he comes back to life clawing up through the ground, and then killing a few people until he gets his Father's Day cake, his whole goal in this. The zombie looks amazing. Possibly the best looking zombie I have seen. Good job Tom Savini. His amazing looking zombie is the only reason to really watch the first segment. This segment is filled with some very over the top acting which is taken to the extent of very BAD acting. over acting can be good and fun, but it didn't really hit the mark here, and was just annoying. This part also had very weird frames, filters, and cutouts around the video, trying to help capture the comic book feel, but again I feel they missed the mark with most of it. It ends up feeling almost childish in an immature way.

The first segment is definitely not the best but gets you in the right frame of mind for the rest of the movie, and at least had one great thing going for it. The second segment is "The Lonesome Death of Jordy Verrill". This part stars Stephen King. It is very weird seeing him in this role. The character is a dopey farm boy who finds a meteor that starts spreading vegetation all over his farm and will eventually cover a much larger area. Now Stephen King isn't really a good actor, in fact he's quite bad. But you can't really blame him he isn't an actor. He overacts but it works better for him. His acting is quite funny.

This whole segment seems more geared towards comedy instead of horror. You can see his thoughts on what will happen with his meteor and in these thoughts he talks to a man. other than that man in his thoughts, all of the dialogue is spoken to himself, which is kind of awkward. The visuals of the plants covering the entire farm look great and the progression they show is very well done.

"Something to Tide You Over" is the next segment and is also my favorite. This part stars Leslie Nielsen, an odd choice, seeing as he is usually a comedy actor. but he does a great job. I think he has the best performance in the movie. The plot is that a man finds out that his wife (I think it's his wife) is cheating on him and wants a divorce (break up). He captures the two of them and buries them neck-deep on the shore planning on the tide killing them. There is a twist ending, which wasn't bad but I felt that it was an unnecessary ending. The short is realistic up until the twist and then it gets all supernatural. The ending did however provide some more great special effects and stays true to the story, so it is justified, I just think that it wasn't needed and that the story could have concluded without breaking realism, which I felt made it less threatening.

"The Crate". A monster is in a crate that is extremely and from an arctic expedition. The crate is found by a janitor and he is also the first to die. They do a very good job of keeping you in suspense on what the monster looks like, just showing short glimpses at first. The short almost turns into a slasher film but not quite. The special effects are great both gore effects and the monster effects look amazing.

There is a very annoying woman in this part but she gets killed so it's all good. At the end they make it seem like the monster in the box is "The perfect murder", because it eats all the remains. I don't really see how that's much better than any other animal that would eat meat. If anything it's worse because you can't control it. But I'm reading too far into this. This short is very entertaining.

"They're Creeping up on You" is just a man being attacked by cockroaches. No other real point to it. This segment just goes for shock and gross out value. This is a cheap way of making a horror movie. Being grossed out is not the same thing as being scared or thrilled. This is a very bad style that is used way too often, and movies that go for gross out value and nothing else are all just sad attempts at horror and are a disgrace to the genre.

I do not recommend watching this part. What I do recommend is watching the rest of the movie and fast forwarding over this part to find out what happened to the kid with the comic book at the beginning, or just stop watching once you reach it seeing as it's the last segment.

"Creepshow" had a few sequels and a "sequel" but none matched it on most aspects especially in terms of the "fun factor", which is when a movie is enjoyably bad, or bad on purpose and just a good stupid time. "Creepshow" is a movie that no horror fan should miss.