In deciding that I would review the Hixploitation films that were created by Bethel Buckalew for Harry Novak the best place to begin would be with Country Cuzzins, without a jug of white lightning but armed with pen, paper, plenty of tissues and a little trepidation I sat down to watch.

Country Cuzzins is a loose retelling of the ‘Parable of the Prodigal Son’. Well, there’s family reunion, forgiveness of family resentment, livestock and lots of simulated sex between distant relatives, so basically the same story.

Grandma Peabody (Zena Foster) interrupts the sexual adventures of her close kin Billie Jo (Rene Bond), Leroy (John Tull), Jenny (Pamella Princess), Jeff (Mark Buckalew), Jeeter (Steven Hodge) and Fester (Jack Richesin) to call together the extended family for one final family reunion before her passing. When Cousin Prudence (Ellen Stephens) arrives from the big city, there is no hiding her disdain for the bumpkin family she left behind long ago, but after a few bouts of 'shine, she's messin’ with the hogs and playin’ in the hay barn. In a drunken moment she invites the Peabody clan over to her place for a get-together. Upon returning home, sober, she is disgusted at what she has done but a friend encourages her to have the party - they will invite friends to dress up as hillbillies and have a good laugh at the rubes. The Peabodys may not be sophisticates, but they’re nobody’s fool; they enter the party dressed in their best attire, and with a touch of the ol’ southern charm, become the hit of the party. Prudence breaks down, ashamed of what she’s done, but good old Uncle Fester shares some warm words of wisdom. He reminds her that family forgives and that she'll always be one of them. 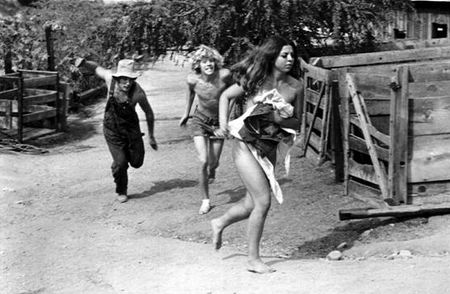 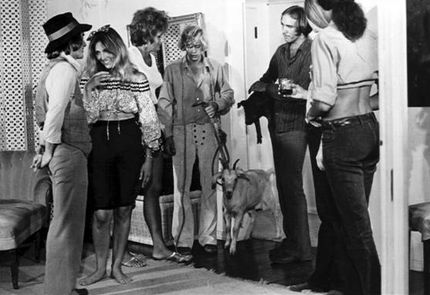 Did I do it? Do you almost believe this is a real movie? I jest, as the first of the Bethel Buckalew & Harry Novak Hix/Sexploitation films I'm exploring is not really that bad ; it's no Russ Meyer film, but it’s just as deft in its production. They aren’t the most enlightened portrayals of rural Americans, but then it wouldn’t be exploitation if they were.

I have to admit, I was actually entertained (or perhaps more intrigued) by Country Cuzzins. I wish I understood the mind that created this of film - I’m fascinated by '70s sexploitation films in general, but sir why do you cut between two young lovers grinding away with piglets suckling? If there was more of that, I could easily draw the conclusion that Buckalew was making some comment on the base animal desires of man. But there isn’t! It’s just that one sex scene, there are plenty of scenes left in all their flaccid glory, without the same artistic treatment. I'm probably giving them far too much credit.

And that’s what this film is at it’s core : Rene Bond's Billie Jo Peabody teasing and a ruttin’. Bond is a cute thing and you can clearly see why she was chosen for farm girl / naive sexpot roles; but why have her ride Buck Flower? Who wants to see that? Every time I watch They Live from now on, I will see his little penis wobbling around. Besides that awkward interaction, Bond’s scenes aren’t too bad. She can act for what it’s worth, but there isn’t much more to Billie Jo. I could try to argue that Prudence's two-dimensional growth - from a socialite embarrassed by her roots to a 90-second enlightened turn around, loving and accepting of her dysfunctional backwater family members - is sort of character development, but it’s the thinnest of strings to try and tie together this collection of poorly executed sex scenes... so I won’t!

The thing is, if you're inclined to be offended by cliché stereotypes or full frontal nudity, you probably wouldn't go anywhere near anything like this anyway. You either love these films, or you don't. And personally, I'm going for another swig!!!

Reviewed by Hands of Manos