Count Dracula and His Vampire Bride/Review

< Count Dracula and His Vampire Bride

A direct sequel to Dracula A.D. 1972, Hammer Studios 2nd attempt at a contriving a modern day thriller around the character of Bram Stoker’s vampire Count ditched the bellbottoms and hipster jive of its predecessor in favour of a darker style and more serious tone. ‘The Satanic Rites of Dracula’ would however turn out to be the final nail in the coffin for Christopher Lee’s career as cinemas most famous creature of the night.

An undercover government agent stumbles upon boobs, blood and black magic at the palatial Pelham House; headquarters of a mysterious paranormal research group headed by 4 prominent public figures and their shadowy benefactor. A girl is violently stabbed on a sacrificial altar only to rise again moments later, her wounds miraculously healing before our very eyes. Called upon to aid with investigating these peculiar goings-on is Scotland Yard hard-nut Inspector Murray who wastes no time recruiting the expertise of everyone’s favourite Doctor of the weird Lorimer Van Helsing.

One of the men photographed at the black mass is an old university pal of the professor’s, a Nobel prize winning scientist and expert in bacteriology named Julian Keeley. Van Helsing pays Keeley a visit only to find the man crazed with panic and fear. ‘Evil rules you know’, he babbles before revealing that he has created a virulent mutant strain of the bubonic plague. Before Van Helsing can ascertain any further details regards who is sponsoring Keeley’s morbid project he’s winged by a sniper’s bullet and when he regains consciousness he finds his friend dead, strung up by his neck, and the germ samples gone.

Inspector Murray meanwhile takes the direct approach and rings the doorbell of Pelham House however his questioning of the Chinese woman who invites him inside is cut short by the sounds of screaming. Unbeknownst to the copper, Jessica Van Helsing has crept in behind him and while exploring the basement has stumbled across a whole harem of lady vampires shackled to the walls and snoozing in crates and coffins. In a scene which is heavily cut in most prints Murray wastes no time in driving a wooden stake between the boobs of one fang gnashing femme fatale.

It transpires that Keeley’s research, as well as the black magic shenanigans at Pelham House, are subsidised by an enigmatic tycoon by the name of D.D.Denham whose office block H.Q. has been erected on the very spot previously occupied by St. Bartolph’s church; site of Count Dracula’s staking at the hands of Van Helsing only 2 years prior.

The Professor speculates that Dracula has risen from the grave once again and that his ultimate plan of apocalyptic vengeance; unleashing a plague that will wipe out all of mankind and therefore the vampires only source of food, may in some way be motivated by an unconscious desire to be released from his immortal damnation. With only a crucifix and a pistol loaded with a single silver bullet for protection Van Helsing strides into the office block for an appointment with the mysterious Mr Denham and a final showdown with the forces of darkness.

‘The Satanic Rites of Dracula’ is a generally unsatisfying end to Christopher Lee’s reign of terror as the silver screen’s definitive Dracula. The vampire elements of the film are cursory to say the least; Dracula himself is only seen putting the bite on one victim in the entire movie. Rather than being the unholy embodiment of the world’s most deadly supernatural plague: vampirism, Dracula is here given a make-over as a Fu Manchu style megalomaniac using modern science to grow deadly germs and bring about his own misanthropic Armageddon. And why does he affect that bizarre Bela Lugosi accent when he’s masquerading D. D. Denham??? 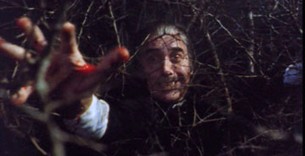 Joanna Lumley replaced Stephanie Beacham in the role of Jessica Van Helsing and as well as the change in actress the character too has undergone a considerable transformation in the 2 years since the events in the previous film supposedly took place. Gone is the petulant, party girl of Dracula A.D. 1972 replaced by a demure young lady described by her grandfather as having “an ingrained curiosity; the hallmark of a true scientist”. Unfortunately nothing more is made of Jessica’s sidekick potential and her character could in fact be edited from the script completely with no ill effect to the film.

Christopher Lee has more dialogue in this episode than all 5 proceeding sequels put together, unfortunately Dracula’s apocalyptic ranting is of the verbose egomaniacal variety spouted by comic book super-villains of the Doctor Doom ilk. If Lee’s performance over-compensates for his characters typically minimal minutes on screen for the first time Peter Cushing appears tired of his role as Dracula’s eternal adversary. His performance lacks the conviction of previous outings and he appears noticeably exasperated in the scene where he is called upon to re-iterate the entire list of methods by which, in accordance with the regularly revised Hammer Horror rule book, a vampire can be destroyed. Dracula’s ultimate demise; brought down by a bush, albeit a prickly hawthorn of the variety that constituted Christ’s crown of thorns, is the most inauspicious comeuppance since his damp demise at the end of Dracula: Prince of Darkness back in 1966.

‘The Satanic Rites of Dracula’ is nowhere near as bad a film as many reviewers have made it out to be however I find it nowhere near as much fun as the juvenile Dracula A.D. 1972; the colourful kitsch of the previous sequel replaced by urban greys and browns and the supernatural elements taking a backseat to secret agents, mad scientists and ‘The Sweeney’ style coppers. The film was released in the U.K. in 1974 but co-producers Warner Bros were unimpressed by the finished product and decided not to release it in the U.S. It finally saw Stateside theatrical distribution in 1978 thanks to independent company Dynamite Entertainment who changed the title to the nonsensical ‘Count Dracula and his Vampire Bride’.

Peter Cushing would return as Van Helsing in one final vampire vanquishing adventure; the Hammer/Shaw Bros co-production ‘The Legend of the 7 Golden Vampires’ (aka The Seven Brothers Meet Dracula) but after performing his Satanic Rites Christopher Lee finally delivered on the threats he had been making for the past 15 years and hung up his cape for good.