Cotton Comes to Harlem/Hell Up in Harlem (2 DVD) 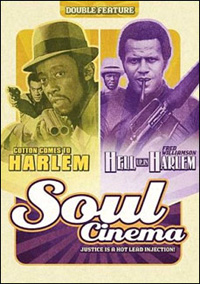 Cotton Comes To Harlem: Detectives "Gravedigger" Jones (Godfrey Cambridge) and "Coffin Ed" Johnson (Raymond St. Jacques) are on the case and in everyone's face when they investigate Rev. Deke O'Malley (Calvin Lockhart) - a brother whose "Back To Africa" campaign is nothing more than a big scam for bigga' bucks. But when $87,000 of O'Malley's laundered cash gets stashed in a bail of cotton, Gravedigger and Coffin find they're not the only dudes suddenly interested in soaring cotton prices! Trailing the bale all over Harlem, the detectives come up against the mafia, the police, black militants and more in an all-out dash to nab $87,000 cash - and to 86 anyone who stands in their way!

Hell Up In Harlem: Fred Williamson (Original Gangstas) is Tommy Gibbs, a fearless, bulletproof tough guy who blasts his way from the gutter to become the ultimate soul brother boss. When he steals a ledger with the name of every crooked cop and man in the city. Enlisting the aid of his father and an army of Harlem hoods, Gibbs goes from defense to offense, launching a deadly attack on his enemies that sets off a violent chain reaction from Harlem all the way to the Caribbean, climaxing in one of the hottest turf-war shoot-outs in Hollywood history.