A slick, con-man named Reverend Deke O'Malley (Calvin Lockhart) has plans to show his further "love" for the community of Harlem by organizing a "Back-to-Africa" rally which ends up going awry. After the shoot-out, a mysterious bail of cotton (With $87,000 stuffed inside) suddenly shows up and all hell seems to break loose when hardboiled dicks, "Coffin Ed" Johnson (Raymond St. Jacques) and "Gravedigger" Jones (Godfrey Cambridge) show up to solve the case. The cops already have a major grudge against O'Malley, but once they find out that The Syndicate is also involved with the scam, they find themselves over their heads. But have no fear. "Coffin Ed" and "Gravedigger" can sure as hell get a job like this done. 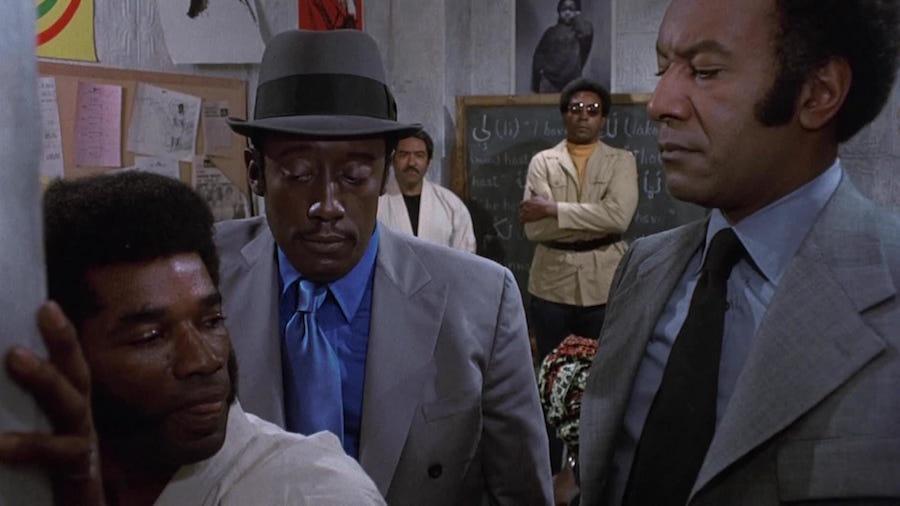 Despite the complicated plot, COTTON COMES TO HARLEM is surely a notable entry in the blaxploitation genre. It predates the landmark events of Sweet Sweetback's Baadassss Song and Shaft and was popular enough to be a big money-grosser. So it should go in the history books for those merits alone. I also love the characters and the acting of the main principles. Lockhart proves to be charismatic as hell and you don't ever doubt for a second that he could have the city's trust in his crooked hands. Cambridge was a versatile comedic actor and if you're unfamiliar with Raymond St. Jacques, just think of Austin Stoker in Assault on Precinct 13. And just to clarify, if you're one of those few who have seen Ossie Davis' other blaxploitation film, Gordon's War, you might not get the repeated action style of that one than with COTTON COMES TO HARLEM. Mostly due to the fact that there's more humor to be found in this one plus it's more dialogue-driven (It's based on a Chester Himes novel afterall)

I can't end this review without giving praise to the opening sequence of this movie. O'Malley's transport going through the city of Harlem set to the smooth, inspirational sounds of Melba Moore's "Ain't Now, But it's gonna be" is really one of my most favorite intros of all cinema.