A deserted ship is found floating towards the New York harbor. Upon further investigation, it turns out the crew has been horribly mutilated. The ship apparently was on a course from Colombia to New York with a shipment of coffee, but there's no coffee to be found in the cargo bay, just carton upon carton of oval-shaped, egg-like organisms. These "eggs" burst upon contact with humans, spewing their insides all over. When this material hits living human flesh, it causes the person's internal organs to burst out of his chest. Obviously, this plot idea is ripped from Alien in its entirety, but honestly, Contamination is a lot better than you'd expect.

The military soon becomes involved in the investigation due to the lethal potential these "eggs" have of destroying human life. Colonel Stella Holmes, along with Detective Tony Aris, soon befriends a former astrnaut, Hubbard, who was one of the members of a two-man expedition to Mars. Upon returning, Hubbard told stories of a cavern filled with egg-like organisms and was deemed crazy, but now his story doesn't seem so outlandish. The three of them soon venture to Colombia to investigate the coffee company that was shipping the eggs, uncovering further details of a sinister plot.

As with many Italian imitation films, Contamination is marred by a low budget that really holds back the film from realizing any legitimate measure of quality. In general, Cozzi's film seems to take the easiest (and cheapest) route in telling its story of alien invasion.

Another problem arises with regard to the acting. Probably the most recognizable face in the cast belongs to Ian McCulloch, the English actor who appeared in Zombi 2 and Zombie Holocaust. Here, McCulloch seems to be wise to the kind of film he is making, and seems to overact on purpose. Contrary to popular belief, overacting in this instance actually comes across favorably, making the whole affair that much more enjoyable. Stella Holmes is played by Canadian actress Louise Marleau, who comes across as very cold and wooden. Rounding out the main cast is Marino Mase as the NYPD detective Tony Aris. Aris is a slightly more human character, but attempts at building a relationship between Aris and Holmes are laughable to say the least, especially given the circumstances their characters are supposedly in during the course of the story. 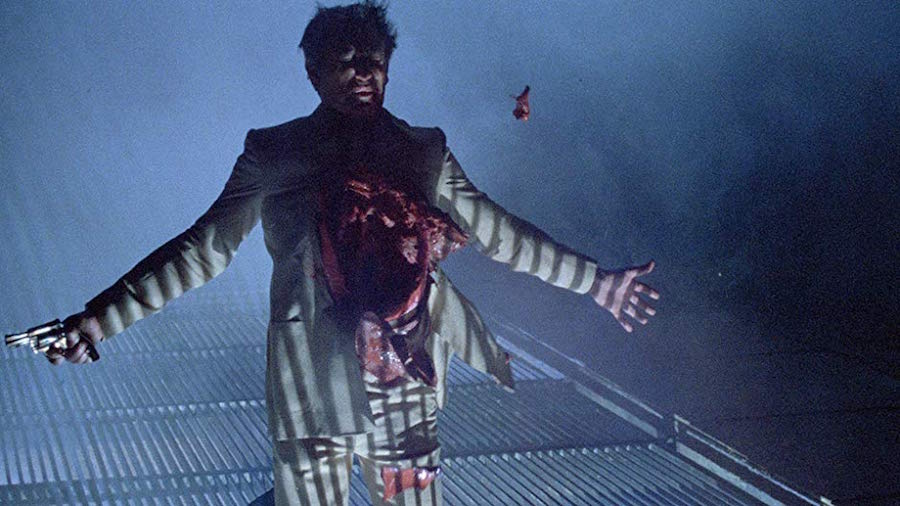 The effects work in Contamination is generally acceptable, maybe even good on occasion, but, again, hurt by budgetary restraints. The "eggs" are rather obviously just balloons, and really don't look all that convincing except in close-up when the balloon is replaced by a more suitable effects creation. As far as the gore, the chest-burstings are generally effective, but it is quite obvious in all situations that a contraption has been placed over the actor's real chest since said actor suddenly puts on about 200 or more pounds just before his innards spray in all directions. Maybe this is just another symptom cause by the alien fluid: it causes the infected person to put on lots of weight just before his or her chest explodes, who knows. The final effect is a giant cyclopean alien that makes his appearance at the end of the movie. This creature generally looks pretty good, considering that it is no more that rubber and cardboard.

The story for the film is also rather well done. The script by Cozzi and Erich Tomek keeps the action coming, and doesn't really stop to let the audience ponder just how stupid all of this is. The script is highlighted by several rather ambitious scenes including the Mars crew investigating a strange cavern on the red planet, and a field in Colombia where the "eggs" are grown. That these kinds of scenes could be achieved on a low budget is a further testimonial to the creativity and perseverance of the crew on the film. The story builds to the expected showdown of a climax, which again satisfies despite the small scale on which it occurs.

One element of the film that has been much elaborated on is the use of a soundtrack by Italian rock group Goblin. As with their work on the soundtrack for George A. Romero's Dawn Of The Dead - Goblin's music here fits the film nicely.

Though the movie definitely suffers from an inadequate budget and questionable levels of talent in both the acting and production departments, Contamination does hold your interest and keep you interested by using solid special effects work, a story that moves forward rapidly, and direction that, while not perfect, does manage to make the film look bigger and better than it really should have.