Italian genre cinema is of course above all famous for the spaghetti western, and Lee Van Cleef will forever be identified with the genre. He also appeared in a Macaroni Combat movie, Armando Crispino’s Commandos (1968). It's a little known genre entry (even to his fans) that deserves more attention.

In 1942 a regiment of commandos is selected for a mission in the North-African desert. They must secure an oasis (now hold by the Italian army) in advance of the allied landings near El Alamein. The regiment consists of Italo-Americans, all fluent in the language of their parents and grandparents, and they must pass for real Italians while waiting for their allies. The oasis is visited by the German forces on a regular basis, for water and supplies, and the job of the Italo Americans is further complicated by their commander, Captain Valli, who ignored the order to take no prisoners during the raid on the camp. The captives are locked up in a subterranean prison, but they’ll do anything to escape and warn the Germans for the upcoming events. A German officer, present at the time of the raid, was heavily wounded but survived the attack and is now desperately trying to attract the attention of his fellow Germans visiting the oasis ... 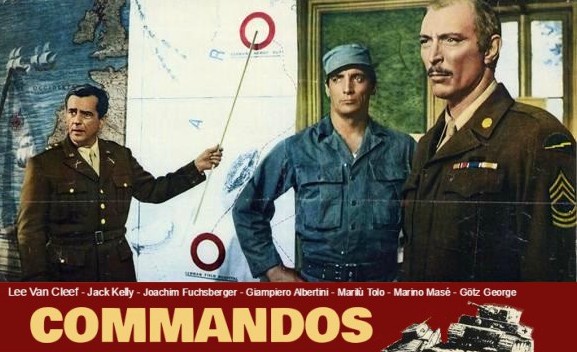 Commandos was co-written by Dario Argento and based on an original story by Menahem Golan. It's more story-driven than most other Italian war movies. It’s also a bit more thoughtful. Although characterizations are stereotyped, none of the nationalities is presented in strictly one-dimensional fashion. Lee van Cleef (more talkative than in most of his western appearances and sweating heavily most of the time) plays an experienced sergeant, constantly at odds with his commanding officer, who has no experience in combat. He is also a man on the edge: a series of flashbacks tell us how things went wrong during his previous mission and why he is worried the same thing will happen again this time.

The situation in the German camp is also illustrated with the help of two contrasting characters: the old fox Fuchsberger plays a intellectual, a college professor in normal life, who’s not really interested in the war, while young lion George is a over-enthusiastic Hitler adept, who feels there’s something wrong with the people in the oasis. The Germans and Americans have long discussions over dinner in one protracted scene (unfortunately abridged in most version), which makes their face-to-face encounter during the final battle all the more moving. The Italians finally escape, but die valiantly in the desert, no doubt a metaphor for what happened to the Italian regiments in 1944 in the North-African desert (*1).

Commandos was a co-production with Germany (German title: Himmelfahrtscommando El Alamein); it was shot on Sardinia, apparently with a fairly high budget. The original running-time was about 110 minutes, but the movie was cut by some 10-12 minutes in most countries (*2). The film is occasionally a bit sluggish, but the action scenes are terrific. The first elaborate action sequence, the taking over of the oasis, is entirely set in the dark, giving it a tension filled, horror like aspect, and the final German attack on the oasis is a truly spectacular set piece, including tanks, explosions and some gruesome carnage.

Notes:
(1) The Italian troops near El Alamein were deserted by their German allies, surrounded by enemy troops and nearly all massacred; only a very limited number of them (some sources say only 10-12%) survived the mass slaughter (2) There are various DVD releases, all with a different running-time; the French DVD has the best image quality and also the longest running-time, but all versions contain footage not found in any other version. A composite version (audio turning from English to French and German from time to time) has a running-time of 111 minutes. A recent Czech DVD is said to run even 3 minutes longer. 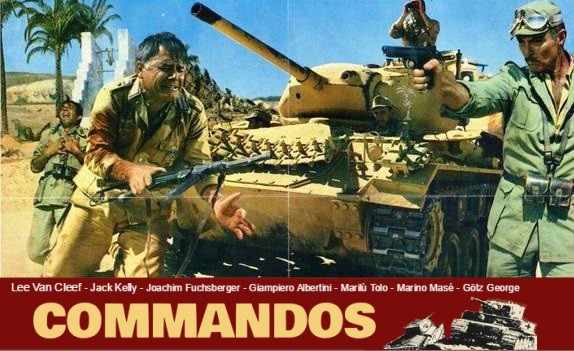 Miscellaneous:
Some will know Götz George (who plays the fanatic Hitler adept) from the Winnetou movies, but to Germans and most other Europeans he is best known as Komissar Schimanski from the long-running Tatort series