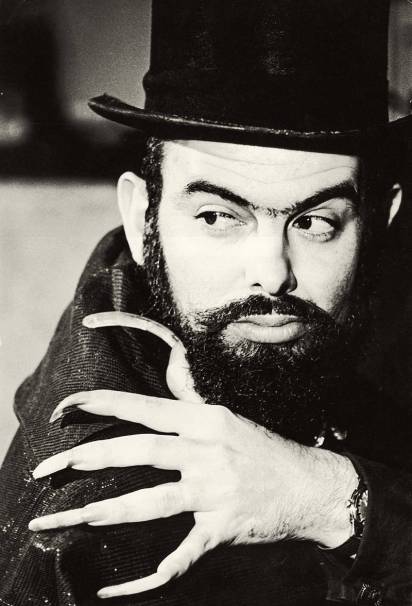 Coffin Joe is a character created and nominally played by Brazilian writer, director, and actor Jose Mojica Marins. An amoral undertaker with Nietzschian beliefs[1][2], he is driven by his desire to have a son by "the perfect woman", believing that immortality is achieved through procreation, a concept he refers to as "the continuation of blood". He often resorts to murder, kidnapping, and rape to achieve his means, with his violent nature, atheism, and antagonism towards Christianity placing him into conflict with his largely Catholic neighbors. Despite his own disbelief in the supernatural, he often finds himself experiencing paranormal phenomena, including encounters with ghosts, Death, and visions of Hell.

Initially conceived of by Marins to serve as the antagonist in At Midnight I'll Take Your Soul, Brazil's first horror film, Coffin Joe has gone on to appear in nine more films, three television series, songs, music videos, and comic books. Called "Brazil's National Boogeyman",[3][4] he is considered the country's most iconic horror villain,[5] on a par with Freddy Kruger in the United States.[6]

Coffin Joe first appears in At Midnight I'll Take Your Soul as the sole undertaker of a small, rural town somewhere in the vicinity of São Paulo. Although the rest of the townspeople hold him in contempt for his anti-Catholic sentiments and violent nature, they live in fear of him for his physical prowess and ability to best any man in a fight. The only people with whom Joe shares even a cordial relationship are his wife, Lenita, best friend Anthony, and Anthony's fiancee, Terezinha, whom Joe lusts for. Believing himself to be of intellectual superiority to those around him, Joe's primary drive is "the continuity of blood" in the form of a son born from "the perfect woman". After learning that Lenita cannot conceive, Joe kills her with a venomous tarantula, then murders Anthony by drowning him in a bathtub. Both deaths are ruled accidental and Joe makes advances on Terezinha, who turns him down. An enraged Joe rapes her, but Terezinha commits suicide rather than report him, though she promises vengeance from beyond the grave. On Dia de Finados, Joe witnesses a procession of ghosts who chase him to Anthony and Terezinha's tomb, where he witnesses their bodies coming to life. Later, the townspeople find Joe on the tomb steps, apparently dead, with his eyes bulging from their sockets.

Joe returns in This Night I Will Possess Your Corpse, in which it is revealed that he survived his encounter with Terezinha and Anthony's ghosts, though he was temporarily blinded. After recovering and going to trial, he is found not guilty for his crimes and returns to his mortuary business. Still desiring a son, he orders his henchman, Bruno, to begin kidnapping women from the town that he has dubbed superior, subjecting them to a series of tortures to see who endures. A woman named Marcia seems impervious to fear or pain, prompting Joe to declare her his "perfect woman", though she rebuffs him when he tries to make love to her while listening to the rest of the women being fatally bitten by venomous snakes. Joe permits her to leave alive, then sets his sights on Laura, the atheist daughter of a prominent colonel. Sharing Coffin Joe's beliefs, the pair become lovers, and Joe conspires to blame his crimes on the Colonel's protege. Although Laura becomes pregnant, both she and their son die in childbirth. Meanwhile, Marcia, wracked with guilt, confesses her experiences, and a lynch mob forms to pursue Joe. They chase him to a swamp, where he is shot. As Joe sinks into the water, a priest offers him salvation, and Joe agrees to die as a Christian before apparently drowning.

Joe returns again in Embodiment of Evil, with a flashback revealing that Joe only momentarily faked his death, surfacing seconds later to deny God and mock the priest before blinding him with his fingernails. Captured and tried for murder, Joe is sentenced to 40 years in prison before being released onto the streets of 2008 São Paulo. Reuniting with Bruno, Joe discovers that a cult has formed around his teachings and beliefs. Joe begins dispatching his followers to bring him women, whom he subjects to mental and physical torture; several women voluntarily fall under his sway, including a eugenicist. Throughout the ordeal, Joe is haunted by visions of his past victims, as well as disturbing hallucinations foretelling his own death. Meanwhile, Joe is pursued by a fervently Catholic police captain and a mentally unhinged priest named Father Eugenio, the son of one of his victims. The pair ultimately pursue Joe to an abandoned amusement park, where he succeeds in killing the captain before himself being stabbed to death with a crucifix by Father Eugenio. In an epilogue, Joe's followers congregate at his graveside, where it is revealed that several of the women are pregnant.

At the time of the first film's production, Brazil had no horror cinema of its own, only having seen American and European horror movies; Marins himself was a lifelong fan of horror, having grown up watching Universal Monster movies in the theater his family owned and operated and which they lived in an apartment above.[7]

Marins states that the idea for the character came in a dream:[8]

"In a dream saw a figure dragging me to a cemetery. Soon he left me in front of a headstone, there were two dates of my birth and my death. People at home were very frightened, called a priest because they thought I was possessed. I woke up screaming, and at that time decided to do a movie unlike anything I had done. He was born at that moment the character would become a legend: Coffin Joe. The character began to take shape in my mind and in my life. The cemetery gave me the name, completed the costume of Joe the cover of voodoo and black hat, which was the symbol of a classic brand of cigarettes. He would be a mortician."

"I was thinking a name: Josefel: "fel" ("gall") for being bitter — and also Zanatas as a last name, because backward it reads "Satanás" ("Satan")". — José Mojica Marins, Portal Brasileiro de Cinema