On an assignment for her college class on witchcraft, pretty young Nan Barlow (Venetia Stevenson) goes to an old Salem town called Whitewood that is recommended by her creepy professor, Alan Driscoll (Christopher Lee). The town was supposedly the site where the famous witch Elizabeth Selwyn (Patricia Jessel) was burned at the stake almost one hundred years ago, and Nan thinks its the perfect place to do her research. Unfortunately, all is not right in the town of Whitewood, as Nan soon learns. When Nan's family and boyfriend don't hear from her in almost two weeks, they organize a search that ends up revealing more about the town than its mysterious residents want to be known.

Apparently an old favorite to many youths who would sneak out to the TV den late at night and watch horror films airing on locally run "Chiller Theater"-styled programs, City of the Dead (a.k.a. Horror Hotel) is exactly the type of film that would pretty much only appeal to those who caught it as youngsters and grew up with an affinity and great remembrance of the film (much in the same way that I really like crapfests like Tourist Trap and Treasure of the Four Crowns, not to mention my absurd fascination with Howard the Duck). Like me, though, anyone seeing this movie for the first time will probably wonder what all the excitement for this film is about.

It's not that City of the Dead isn't atmospheric, because it certainly is. There is a distinct air of dread over the entire film and the sets are all appropriately fog enshrouded, while some pretty good scenes involving residents of Whitewood stopping dead in their tracks to stare at newcomers add to the ominous feel. The only problem is that the film doesnít really inspire any fear in its (over age eleven) viewers and parts of it bear more than a passing resemblance to another more popular 1960 release called Psycho. Though the basic plots are very different, there are elements of this film that also appear in Psycho, such as Nan's surprise departure from the film early on and her boyfriend's efforts to find her. There is even a skeletal reveal at the end of the film that recalls the discovery at the end of Hitchcock's most famous film (though the purpose of the reveal in City of the Dead is lost on me, as it really has no apparent bearing on anything in the plot). Though it's true that it is hard to find any original films these days, the fact that this film bears so much resemblance to a film that was released in the same year serves to ruin the great atmosphere previously established. 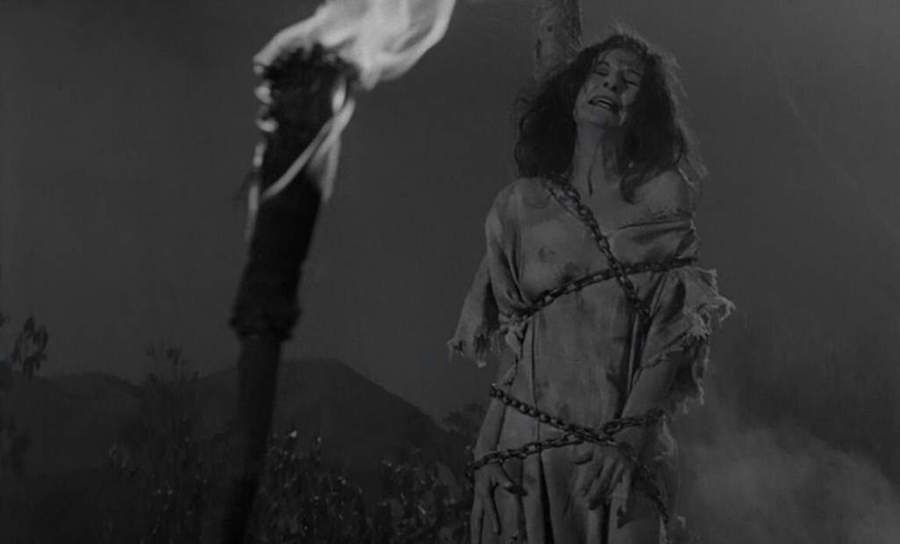 The film was originally released on DVD in March of 2001 as Horror Hotel (the US title of the film) through Elite Entertainment. The film was presented on this disc in its original widescreen aspect ratio and was, sadly, not enhanced for 16x9 televisions (despite the relative prevalence of the feature on almost every disc in release nowadays, Elite included). The only feature on the disc was the original trailer (which reveals the ending), but the packaging also contained a letter from Elite owner Vini Bancalari, who discussed why he chose to release this film on DVD.

Feeling that they could definitely do better by the film than Elite did with their disc, VCI Entertainment came along a mere seven months later with their own version (under the title City of the Dead... the original British title) that could certainly be described as the most worthy presentation of the film on DVD. Their print of the film retains its 1.66:1 aspect ratio, but it also offers up an anamorphic transfer over Elite's disc and two minutes of additional footage missing from the previous versions (none of which really adds to the already lackluster story).

The real meat of the disc, though, comes from its extensive supplements. First up are three interview segments, the first of which is a forty-five minute interview with Christopher Lee. Lee is an amiable guest and he openly discusses not only this film, but also his work in recent films such as Lord of the Rings and Star Wars: Episode Two. It is somewhat humorous that he mentions his work in both, though, as he starts out his interview with a diatribe against CGI in films (one which seems more directed at George Lucas than at Peter Jackson).

Next up is a twenty-six minute interview with director John Moxey. Moxey has a good deal to say about the film in his short amount of time (a release he gets during a commentary track also featured on the disc) and he even responds to the allegations that the film paralleled Psycho.

The final interview on the disc, featuring Venetia Stevenson, runs nineteen-and-a-half minutes and actually seems shorter thanks to the fact that clips from the film keep interrupting her. Stevenson also takes to task the people that have accused the film of lifting from Psycho during her segment, which would seem defensive if it werenít for the fact that City of the Dead actually came out first.

As mentioned above, director Moxey does contribute a commentary track for the film, which is informative, despite the poor nature of the film he is discussing. He again touches upon the similarities between Psycho and his film on this track, but he (thankfully) never gets repetitive even though he broaches the same subjects during his interview. More interesting (though odd, considering his length of screen time) is a feature-length commentary by Christopher Lee. Moderated by Jason Slater, this track moves along at a steady clip thanks to Slater's questions, though not all of them seem to be aimed at the movie they are watching. Lee gives his admiration for the film and its atmosphere early in the track before Slater starts asking him more about his career than what is actually happening on screen. Late in the track, some mentions of Lee's roles Lord of the Rings and Star Wars are thrown in (as well as his own priceless thoughts on Lucas' choice of the title for Episode Two: Attack of the Clones), mostly concerning the hard work he seemed to put in for his brief roles. Its good stuff, but my fears that the track would not focus on the film itself were founded after a mere twenty minutes of listening to it and it only loses focus on the film more as it progresses.

Rounding out the features on the disc are the US trailer for the film (the same one that appeared on the Elite DVD), a photo gallery, and cast and crew biographies. As a cute little added bonus, the keepcase art is also reversible, featuring a traditional horror film styled cover or a recreation of the Italian poster art for the film (the side which I prefer out of the two). Though I wasnít very impressed with the film itself, those who do have a fondness for it should be relatively pleased with VCI's stellar effort.

Film/DVD Review by Pockets of Sanity