City Of The Living Dead/Review

After directing the smash hit Zombi 2 a year earlier, director Lucio Fulci went on location in New York City and North Carolina to shoot City Of The Living Dead. This film continued the themes of the undead walking the earth, but the story probably has more in common with the classic gothic horror cinema of Mario Bava than George A. Romero's American zombie films. The screenplay was written by Lucio Fulci and his writing partner and friend Dardano Sacchetti, a veteran of Italian genre cinema.

From the opening scenes, we get a sense of dread as the camera shows a fog covered graveyard where a young priest named Father William Thomas (Fabrizio Jovine) hangs himself. In New York, a young beautiful woman named Mary Woodhouse (Catriona MacColl) is at a séance where she sees a vision of the priest hanging and she has a violent seizure and is later pronounced dead. The medium conducting the séance is Theresa (Adelaide Aste) and she warns the police officers that the world is on the verge of being overrun by the dead. It will happen on All Saints Day at midnight. The lead inspector thinks she is full of it and dismisses the death as a freak occurrence.

A reporter named Peter Bell (Christopher George) investigates the story which takes him to the graveyard where Mary Woodhouse is being buried. While he talks to the wisecracking grave diggers at the plot, we see inside Mary's coffin. She seems to be dead, but suddenly her eyes open and she begins to claw at the coffin lid making her hands all bloody. Outside, Peter is walking away from the grave but something makes him go back. Mary begins to scream loudly and Peter panics and grabs a nearby pick axe but instead of trying to pry the lid open, he rips the coffin lid open, nearly impaling Mary's head with the tool. Amazingly, Mary was not dead, but in some kind of a trance. She and Peter go back to Theresa's home where they talk about her visions of the priest. The town with the grave marker Mary claims she saw in her vision is called Dunwich. Now they must travel to the town to find out just what's going on there.

Meanwhile, in the town of Dunwich, many strange things are occurring. The local bar owner's wall cracks down the center. A local teen named Bob (Giovanni Lombardo Radice) is in a strange daze as he wanders around collapsing in different areas of the town. A local doctor named Gerry (Carlo De Mejo) is examining a patient, Sandra (Janet Agren). A local girl named Emily comes to see Gerry and ask him if he wants to get together, but instead she goes to see Bob. Bob seems to be possessed and when Emily shows up, he freaks and runs out on her. Emily is startled when she sees the undead Father Thomas. He has a huge handful of worms and mud and proceeds to smother Emily's face, choking her with the gruesome mess.

A couple of teens are making out in a van in a small lot near the Dunwich graveyard. As they stop kissing to talk, the boy turns on the car's headlights and they both are in shock as they see Father Thomas hanging from a tree, then disappear. The priest reappears outside the van and as the girl stares at him, her eyes begin to pump out bloody tears. Then if that wasn't nasty enough, she begins to vomit a white fluid which turns to blood which then leads to her barfing up her intestines for a lengthy amount of time. Her boyfriend gets his head ripped apart by another undead creature as his brains are squished between the deadite's fingers! The intestine puking sequence in particular is definitely one of the goriest and stomach churning sequences in any Horror film Ive ever seen. NOTE: While watching this sequence, make sure you're not eating or you may get sick. That being said, no one does gore as well as Fulci. He was truly the master! 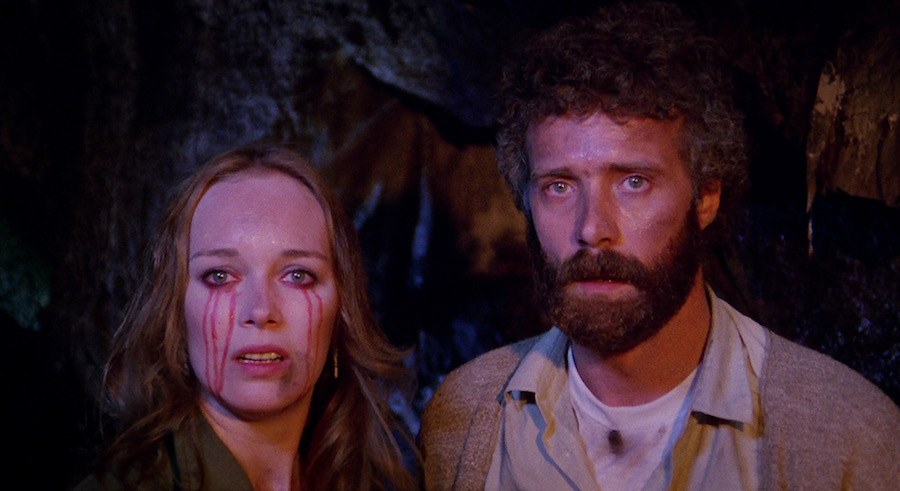 The teenage boy, Bob, is still meandering around town when he finds a friend's house and passes out in a car in their garage. When his female friend finds him there, she offers him a joint to smoke with her. Suddenly, her father flies into the garage and begins screaming at her. Bob runs for the window, but her father grabs him, pulling him back into the garage. He beats Bob violently and in the midst of the attack, Bob accidentally turns on the motorized bench drill. The girl's father begins to push Bob's head towards the drill. Now, in most films, Bob would barely escape the danger, but not in a Fulci film! The man pushes Bob's head right into the drill. We get a tight close up shot of the drill bit going right through his head and coming out the other side! This is one effect that truly comes off as completely realistic. Another great example of the incredible FX by Fulci's team of master artisans!

Mary and Peter make their way to Dunwich, but before they get there, they stop and ask a priest directions on which roads to travel. They finally get to Dunwich, where they meet Gerry The Doctor and Sandra. Word arrives from Emily's brother that Emily has killed her mother and father, but she's been dead for two days. They rush to rescue her younger brother, John John (Luca Venantini) from the house before he is killed as well. The group: Peter, Mary, Gerry, Sandra and John John try to find out where Father Thomas was buried. The only way they can stop the dead from coming to life and overrunning the town is to burn Father Thomas' remains. The explosive climax of the film takes place in the graveyard's underground tombs where Mary and Gerry are the last hope of defeating the awakening dead souls.

If you love classic Italian Horror cinema, City of The Living Dead is a must see. The film is filled with incredible sequences that only a master like Fulci could create and execute. It's well paced and is definitely in the same vein as the pure cinema of The Beyond, but it's even more gory and disturbing.