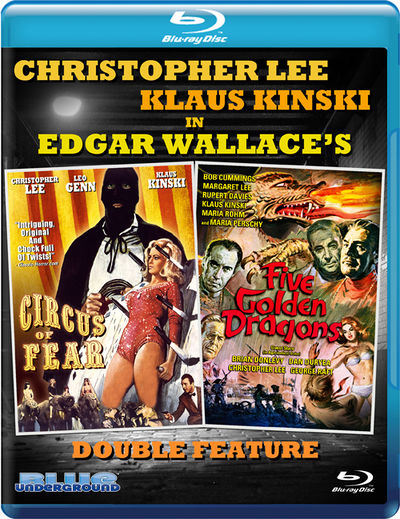 The Most Horrifying Syndicate Of Evil In History! What begins as a daring daylight armored car heist on London’s Tower Bridge leads to a sinister circus where a disfigured lion tamer (Christopher Lee) is one of several suspects in a three-ring nightmare of red herrings, grisly "accidents" and cold-blooded murder. Klaus Kinski (VENOM), Suzy Kendall (BIRD WITH THE CRYSTAL PLUMAGE), Margaret Lee (FIVE GOLDEN DRAGONS) and Leo Genn (THE BLOODY JUDGE) co-star in this gripping thriller directed by John Moxey (HORROR HOTEL, THE NIGHT STALKER) and based on a novel by legendary mystery writer Edgar Wallace.

Originally released in America as PSYCHO-CIRCUS in black & white and cut by more than 22 minutes, Blue Underground has now restored the film to its full running time. Presented in a stunning new 2K High Definition transfer from the original British color negative, this is CIRCUS OF FEAR as you’ve truly never seen it before!

Circus of Fear tells the story of a daring daylight heist on a London bridge that sees the loot, a bag full of money, subsequently get lost at a local circus and fall in the hands of a knife artist. One of the gang’s inside men gets killed trying to recover it, and now the police are circling the premises in search for a murderer, the rest of the gang are circling it in search for the money, and all the while - it’s a circus after all - there are wild animals about, jealous husbands, family intrigues and other weird shit going about. A perfect setting for a few million pounds to be lost at.

The exhilarating trailer is the most exploitation-like aspect of this film. It’s a standard 60s “Edgar Wallace”-type “whodunit” crime flick with Giallo elements and some money shots of Klaus Kinski (to better sell it in Germany). It bears all the marks of the sensationalist crime films of the time, with seemingly boring heist elements blown up to epic proportions in advertisements, title and artwork, only for the viewer to realise that it’s nothing more than average paperback material sold thru flashy advertising. But those were simpler days. 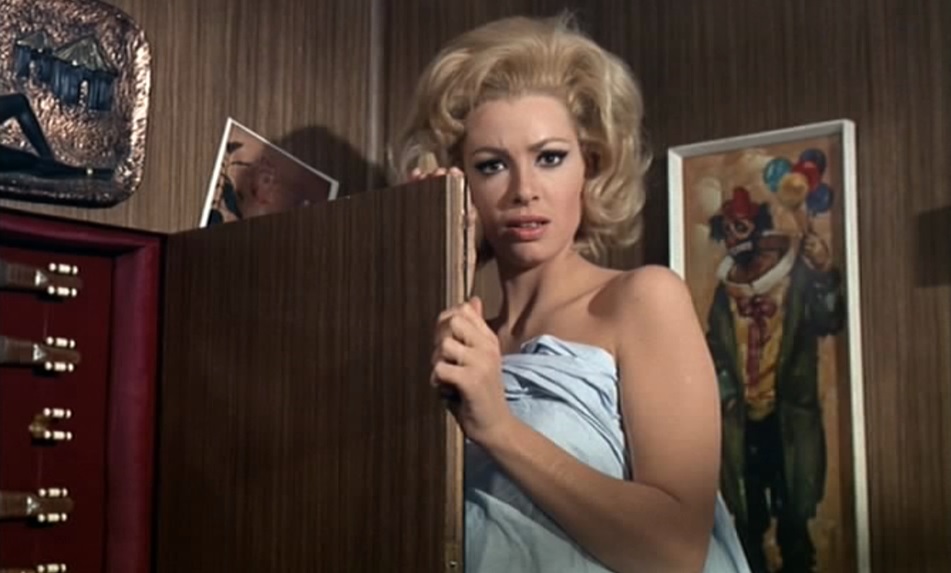 Director John Moxey's quite good craftsmanship got butchered in the US with a 20 minute shorter black and white version, and in Germany by a slightly recut version also in black and white (for which the film’s assistant director was credited). 60s German funnyman Eddi Arent of course must’ve helped sell it alongside Kinski to make some bucks there. But then again, in the 60s Edgar Wallace was the hottest shit around in terms of crime movies. The rest of the cast is staple, among them Heinz Drache and Christopher Lee. The dames, Suzy Kendall and Margaret Lee, don't get to shine too much unfortunately.

What bucks me a bit is that even for 60s standards, the cops are a bit too smart and relaxed in their work, and there’s just too much cooperation and order at the circus, where the title might’ve made you suspect that there might be an atmosphere of fear, horror and danger. The movie just is a bit too tame for everyone’s standards I guess.

In terms of extras there's the international trailer as color and black and white versions and trailers for the US “Psycho Circus” release. A poster and still gallery. The audio commentary with the director is interesting, albeit not fantastic, still for fans of the genre worth listening into. The BluRay boasts decent transfer quality and a solid soundtrack, with no frills. You get a few extras, but the audio commentary does increase the use and value of this by a few notches.

Girls! Gold! Intrigue! After arriving in Hong Kong, wealthy American playboy Bob Mitchell is the recipient of a strange note found on the body of a dead man. A clue to an illegal gold-trafficking operation, Mitchell is unwittingly thrust into a deadly power struggle between a secretive global crime syndicate and brutal local mobsters. Can he survive long enough to unmask the mysterious FIVE GOLDEN DRAGONS?

We’ve seen this before: exotic locations, beautiful dames, international conspiracy, murder, the odd cross-city chase and 60s elevator music. Harry Alan Towers delivers the goods, and once more you’re caught in the cozy webs of mellow 60s adventure. The dialogue is mediocre, the editing horrible and you can’t shake off the feeling that for everyone involved this was just an excuse to spend time in Hong Kong. Shut up and take my money.

Bob Mitchell (Robert Cummings) stumbles into the Five Golden Dragons…. almost literally. He’s no spy, adventurer or very good ladies man, he’s a chewing gum salesman. What unfolds is a semi-voluntary cat and mouse game that involves the cops chasing the fifth Dragon while keeping tabs on the four they know. Bob in the meantime seems to be the only one with a knack to get close to the syndicate. He teams up with Magda (Margaret Lee) who dances in one of their clubs, but is chased by a weirdo chainsmoking killer (Klaus Kinski again, in another useless alibi role). Why they threw Maria Rohm (who can't act for shit) in there is beyond me, it just further complicates the colorful mess of characters. Refreshing as the nightclub owner is Sieghardt Rupp, who I think died earlier this or least year. Christopher Lee has but a camero, just as singer Yukari Ito. 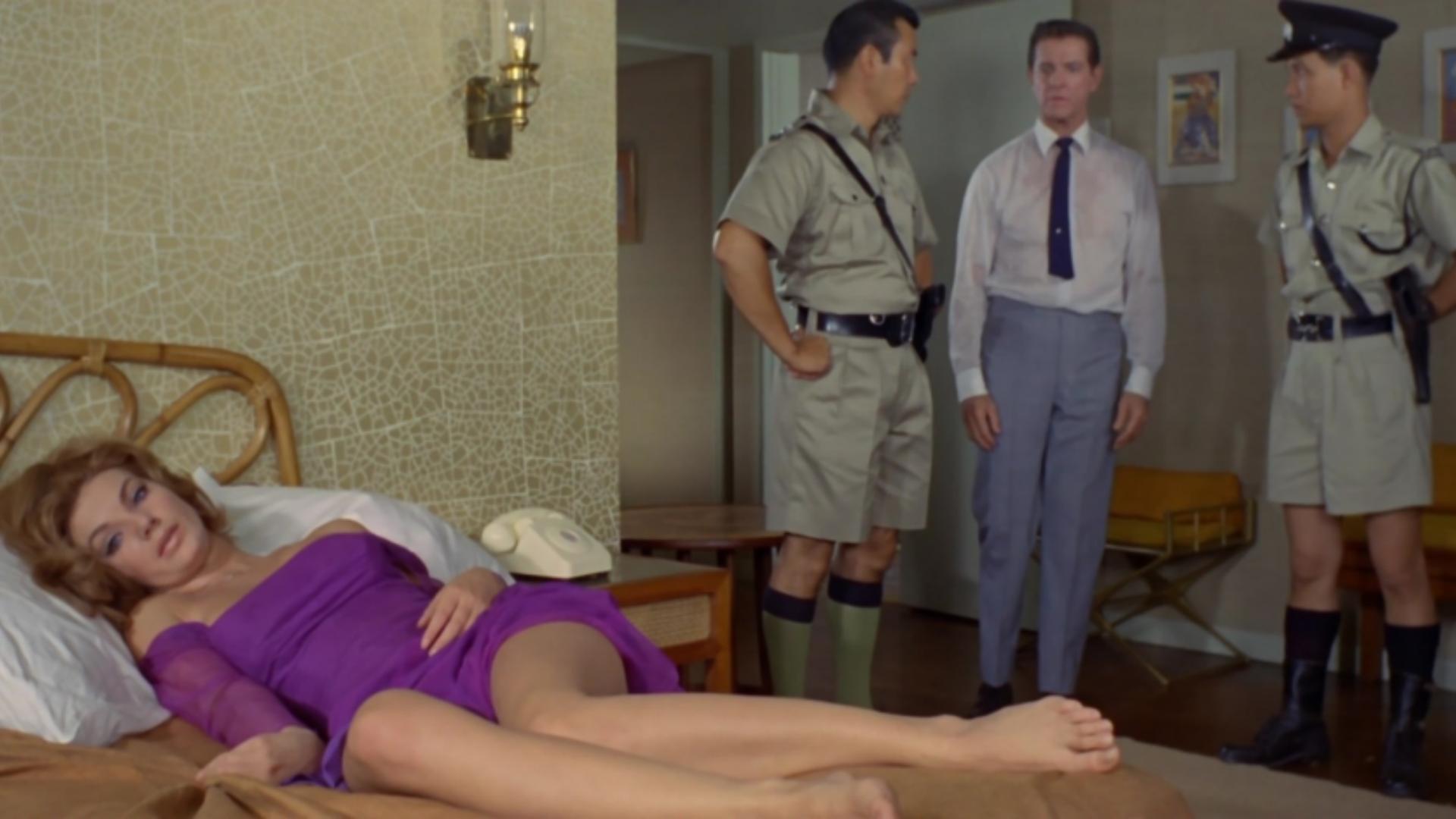 Director Jeremy Summers delivers that light-hearted 60s adventure, in which Cummings stumbles around with the ease of the 30s comedy thespian that he is and never managed to grow out of. Partially shot at Shawbrothers Studios, the movie packs plenty of action and goings-on to keep the audience busy, but the execution is hamfisted (especially the editing and choreography: at one point there's two adults trying to grab each other, the way 5 year olds play tag...). The decent soundtrack and interesting characters make up for the bad directing so to speak, and even though the dialogue is bad, it offers plenty of funny lines and offers a glimpse into a wee bit of ambition that lures between them.

The audio of the BluRay isn’t all too great, which makes dialogue a bit hard to comprehend, so subtitles might actually be helpful for a lot of folks, gladly those are included. It’s a fairly bad dub in general, however, which adds to the vintage charm. While the image transfer is rather great, the audio seems to have been taken from an inferior source. You get a trailer and an images gallery.