Christmas is always a good time to watch movies. There are so many that you can choose from too. From classics like A Charlie Brown Christmas (which is a movie that I have to watch every year), A Christmas Story and A Christmas Carol to more offbeat choices like Die Hard (I watch it every year too) and The Star Wars Holiday Special (which is AWFUL!). Actually, there are also more horror movies about Christmas than Halloween. Probably the most famous one is Christmas Evil, a psychological-thriller that has a chilling atmosphere and a black comedy type story.

A young boy named Harry (who thinks that Santa Claus is real) once saw Santa trying to make love to his mom. He then grows up and works in a miserable toy factory. Although he's a super enthusiastic production manager (who sometimes joins the assembly line and works poorly) everybody treats him bad. He spends time watching kids and writing down the names of both good and bad ones. Unfortunately, all the tension and insults make him depressed and angry and he slowly goes mad. Harry decides to scare all the bad kids and argues with his boss about not giving away toys to retarded kids in the hospital. Later, he dresses up in a Santa Claus suit and steals some toys from the factory and brings them to those kids himself. He goes crazier and proceeds to kill the people who made fun of him, drives his "Santa-mobile" around the town, gives away more toys and kills his boss. Soon the police tell the townspeople to stay away from anyone who is dressed up as Santa Claus. Philip, Harry's brother, decides to stop Harry as his wife requests when they find out it's him. Next, Harry goes further and harms any parents who don't believe in Santa. In a crazed climax, the whole town decides to hunt him down like in the original Frankenstein and these events lead us to a very surprising ending. 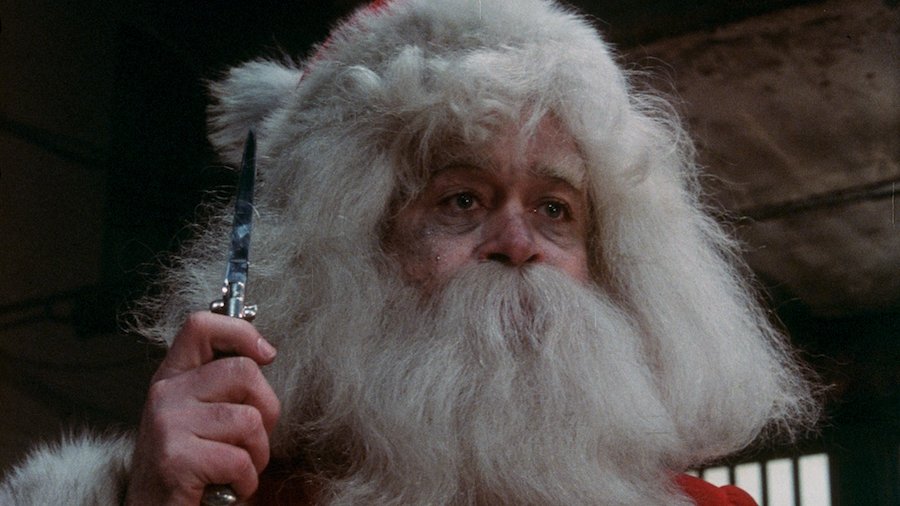 I decided to call this film a psychological-thriller instead of just a "slasher film" because it presents an interesting aspect about Harry's life. Harry is a miserable guy who wants to relive the childhood legend of Santa Claus again. He tries to be a good guy for the kids but also a "judge, jury and executioner" for the bad citizens. Interestingly, there's only a few death scenes and they're not as gory as you might expect. That's because the whole point of the film is to make us sympathetic to Harry's situation.

There are several moments in the film that I love. For instance, there's a Santa lineup scene while cops try to find out which one is Harry. Imagine the famous "Hand Me The Keys" scene from The Usual Suspects but with a bunch of Santa Claus' instead. Also, when the people hunt him down like Frankenstein they're holding torches and running around, which is similar to the very final moments of our beloved monster. Another one that I enjoy is the when Harry watches the news on TV about the retarded children, then asks his boss about giving away toys to them. Sadly, his boss refuses. Not only does this scene show us how ignorant businessmen can be but it also motivates Harry to become Santa.

The final thing I'd like to mention is the ending. Seriously, this is one of the best endings I've ever seen. I can't tell you anything more, except the fact that it's weirder than The Sixth Sense, more shocking than Psycho and more memorable than Fight Club. Yeah, I said that.

Overall, I strongly recommend you to watch this on Christmas night.