(Redirected from Cheech and Chong) 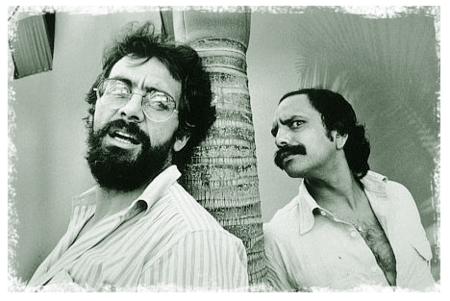 Cheech & Chong are a comedy duo, consisting of Richard "Cheech" Marin and Thomas "Tommy" Chong, who found a wide audience in the 1970s and 1980s for their stand-up routines, which were based upon the era's hippie/free love/drug culture movements. Cheech and Chong essentially became the Martin & Lewis of their generation. They went on to star in several comedy films in the late 70s and 80s and have since become internationally famous for their support of the decriminalization of marijuana. Both Cheech and Chong have acted in a variety of TV and films including Martin Scorsese's After Hours (both/film), That 70s Show (Chong/TV), Nash Bridges (Cheech/TV), Tin Cup (Cheech/film), From Dusk Till Dawn (Cheech/film) and Machete (Cheech/film).

Pages in category "Cheech and Chong"