In 1983, Cheech and Chong returned with this great film set during a Burt Reynolds and Dolly Parton Film Festival in Amsterdam, Holland (leave it to Cheech and Chong to find a country where pot smoking is legal to set their movie up!). Cheech is mistaken for Burt Reynolds and they are both referred to as "Mr Burt" and "Mr Dolly" by the Dutch hotel owners and workers where they stay. They travel around Amsterdam (the pot smokers paradise) and stop at a special "marijuana food" cafe on the water where they eat and trip out.

There are special vignettes performed inside the movie itself: we get to see Chong as his alter ego "Blind Melon Chitlin", theres another great skit called "Dope A Thon 82" in which we see a short film called "The Harder They Don't Come" (a homage to the Reggae music film The Harder They Come) starring Cheech as a dope peddler and Chong as an uptight cop which is really funny. In the next skit we see Chong and Cheech as ex-cons with their own show. Chong preaches how he hates cops and that "Guns don't kill people, COPS kill people". Then he accidentally shoots himself. They also do a hilarious piece in which Cheech and Chong tag team wrestle the Invisible Man. 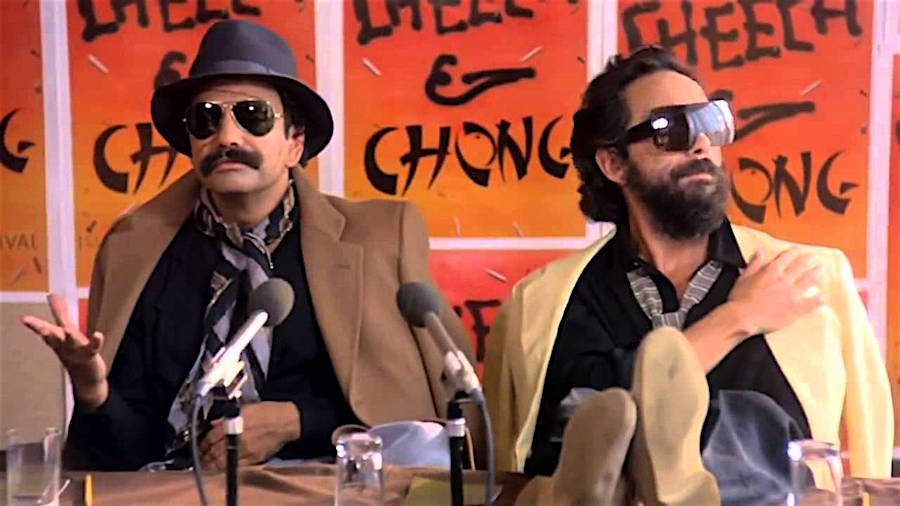 Cheech and Chong try to each think of skit ideas for their big show thats coming up, and Cheech invents a brand new character, his name is EDDIE TORRES: THE EXTRA TESTICLE (this film came out right after Spielberg's massive box office hit E.T. The Extra Terrestrial). His outfit is a cheap oversized tank top spray painted with "E.T." on the front and three spray painted testicles at the bottom. Genius!

At the end of the film, Cheech and Chong perform their classic comedy act for the Queen of Holland (or whatever she is). Its obviously not the real Queen. Cheech and Chong do all kinds of great skits including: The Old Man and The Punk and The 2 Dogs.

Throughout the film (as with the earlier ones), you'll see how imaginative Cheech and Chong were when it came to visual comedy. They play off each other perfectly and they are absolutely in the same vein as Martin and Lewis where each one totally compliments the other.