Cheech and Chong are back, this time running a business selling weed out of an ice cream truck thats been converted into a "NICE DREAMS" truck. They are being tailed by Sgt Stadenko (Stacy Keach) who is now a pothead himself. Cheech and Chong get a special kind of weed created by their mad scientist friend Jimmy who has even taught his pet lizard to smoke weed and has created a gene altering "Lizard Weed". We goto Cheech n Chongs pad which is a big mansion they live at with a blind musician friend named "Ray" (get it? Ray Charles joke!). When they arrive, we see that cops are watching them from a helicopter (every drug lovers worst fear) as part of the NARCOTHON project to rid the streets of drugs. Its really funny as they try to catch them in the act, especially when they can't see the huge pot field hidden perfectly under what looks like an inground pool from above.

Cheech and Chong are making loads of moolah from their new pot selling operation and they tell each other what they want to do with all their money after they retire. Cheech wants to sip "Pina Colonics" in the sun and Chong wants to buy tons of guitars. Later on, they are hanging out at a Chinese restaraunt and Chong gets mistaken for Jerry Garcia by a highly annoying...woman, she proceeds to yell and scream, and steal his plates of Chow Mein. Then Donna stumbles into the restaraunt with a coke dude (Paul Reubens aka Pee Wee Herman). She recognizes Cheech and she falls all over him. Chong gets some free toot from Donnas wacked out friend and they all snort the coke under the table (watch Cheech's facial expression after he does the coke). 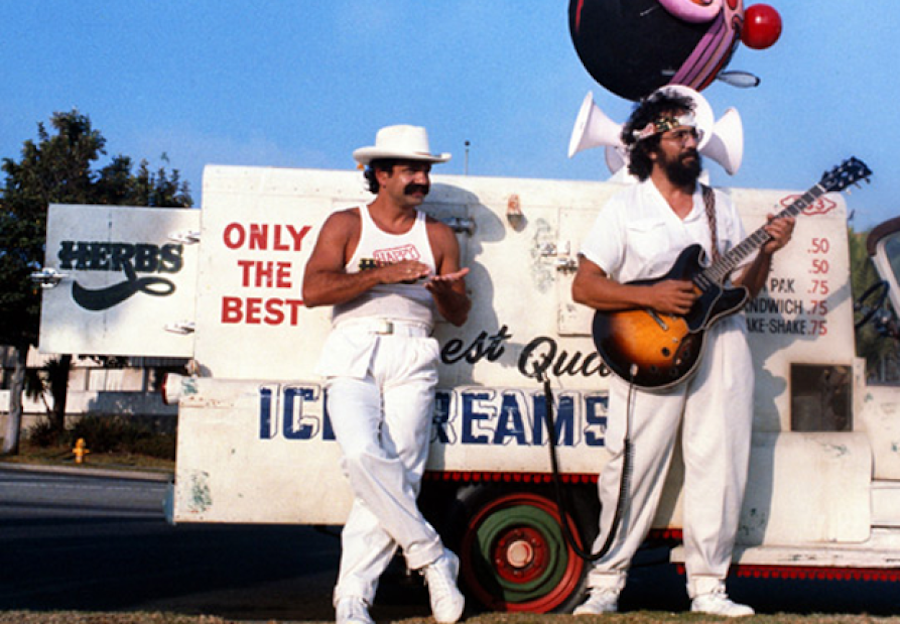 One of the funniest parts of the movie happens when Cheech and Chong take Donna back to her place. They all go up to her apartment and Donna's biker boyfriend "Animal" (who hates Mexicans) unexpectedly shows up and pisses in the apartment's jacuzzi tub while people are in it. He comes up to Donna's and knocks on the door. Chong thinks it Cheech and tells him to go away (theres a fun "Dave's Not Here" reference), but once Animal punches through the door, Chong runs and hides under the bed. Meanwhile, Cheech gets stuck outside on the balcony of Donnas apartment in the nude and tries to get down by hopping on the top of the outdoor elevator and we see Animal and Donna are having a humpfest inside while Chong is under the bed.

After finding out Chong cashed in all their money to the cokehead weirdo for a bad check, Cheech and Chong set out to find the cokehead guy he gave the money to. They come upon what looks like a cemetary and hop the fence. The next day they awake to a screeching man who thinks hes a bird. They find out, the place where the cokehead lives is actually in a mental hospital! Theres a really hilarious sequence as Cheech is mistaken for a wacko and hes put in a padded room in a straightjacket. He's unable to get out and he really needs to "scratch his balls!". LSD Guru Dr Timothy Leary makes a cameo in Cheech's mind after he trips out. By the end of the film, we see Sgt Stadenko has turned into a lizard from smoking all Jimmy's "Lizard Weed" his cop squad had confiscated earlier.