In 1980 Cheech and Chong followed up their classic debut comedy film with Next Movie. We rejoin the duo as they are trying to find some gas for the car they stole from their neighbor who's a very effeminate loudmouthed idiot. He adds some really funny moments in the film as he goes ballistic because he lives next to Cheech and Chong who are unapologetic slobs. The two pals find a truck and they siphen out gas and put it in a trashcan. As they walk along they try to keep the overfilled trashcan level so they don't spill it all over. While they're driving along, Chong accidentally lights up a joint and the gas fumes explode. 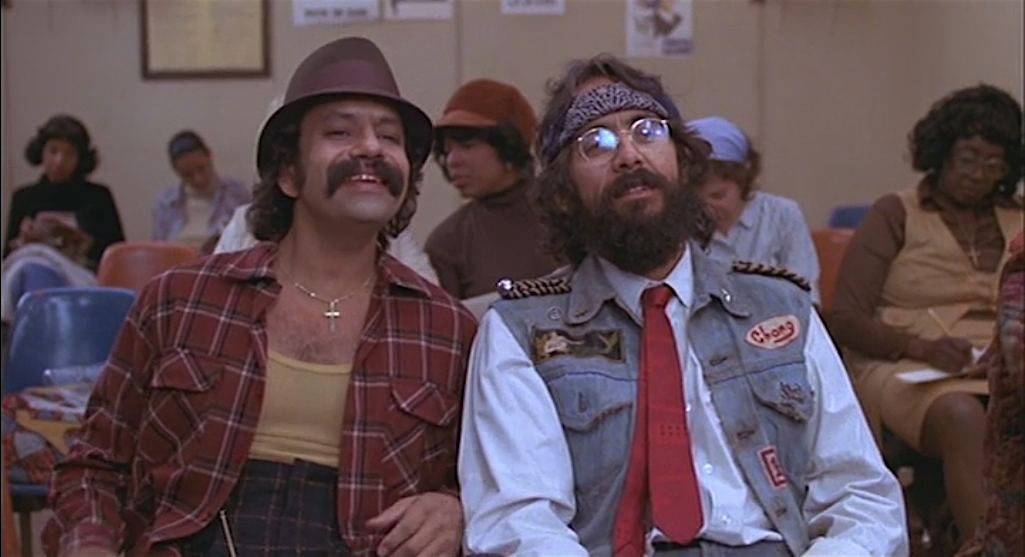 Cheech works at a movie studio (look for an early appearance by Tom Hanks' wife Rita Wilson) and after he arrives there late he asks one of his girlfriends to get him some clean clothes by telling her he's all charred from rescuing a burning baby (his clothes are still smoking from the gas explosion in the car). Afterwards, Cheech takes one of the studio's vans without clearance. The next day, they wake up and Cheech sees the van has been taken by the studio. Now him and Chong are in trouble. He immediately gets fired for taking the van so its off to the unemployment office they go. Cheech sees his other girlfriend Donna who works there. In one of the funniest sequences in the movie, Chong sits outside and waits for Cheech while he and Donna get it on in the other office. Chong sits next to an old crazy guy who cant stop laughing at a dude who's slowly nodding off in an adjacent seat. Everytime the man laughs, the sleepy guy wakes up. You'll also see an early cameo by Police Academy regular Michael Winslow as well. He's the dude who does all those crazy sound effects with his voice. 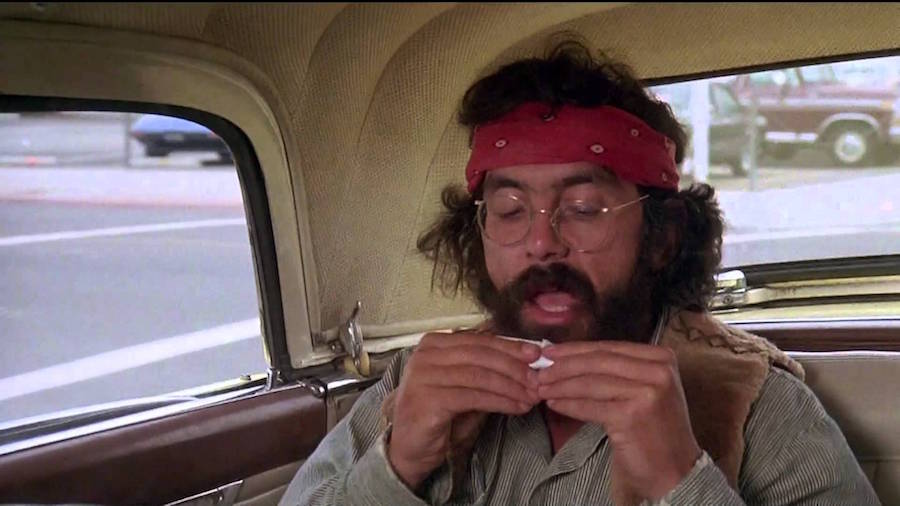 Pedro gets a call from his weirdo hick cousin Dewayne "Red" Mendosa (also played by Cheech) and he needs to pay to get his belongings from the hotel he's staying at. Cheech sends Chong to help him out and when he arrives he finds out that Red doesn't have any money so they break into the hotel room after the annoying hotel clerk (Paul Reubens) refuses to give Red his suitcase unless he pays for the room. Chong and Red grab his stuff and interrupt two lovers in bed. They get out of there and as they're leaving through the back alley, Chong discovers that Red has a whole duffel bag full of marijuana. Just what the doctor ordered! 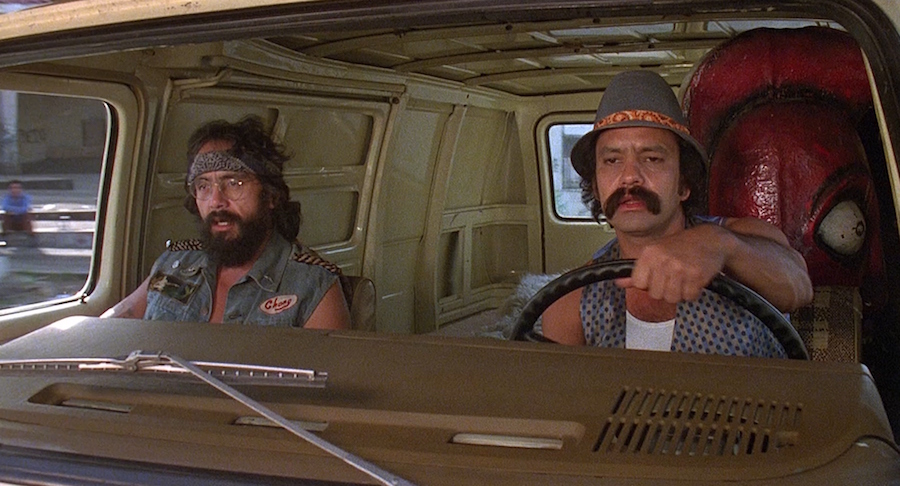 They next get invited to a "spa" in downtown LA, they find out is really a brothel. So they have some fun in the hot tub and they leave and goto a music store. When they get kicked out, Red and Chong hitch a ride with a babe to her house and they all have dinner and play some music. You'll see an early appearance by Edie McClurg (Ferris Bueller's Day Off) as the wacky mother. They all hop in the car and smoke some weed and crack jokes. They decide to stop at a comedy club and none other than the loudmouthed hotel clerk who calls himself "PEE WEE HERMAN" has his own standup act in which he opens with "Hi! My names Pee Wee! Whats Yours?!". 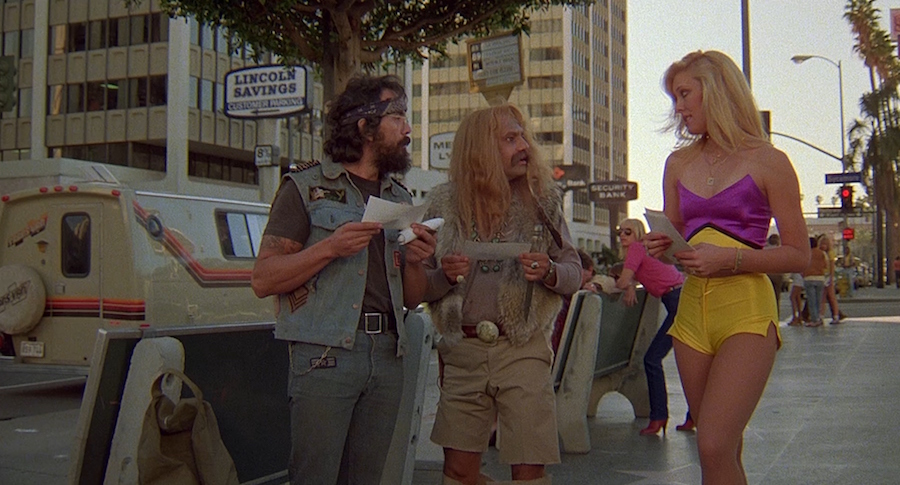 After getting in a big brawl at the comedy club, Red and Chong hop in some guys Ferrari with the license plate "OU812" and they decide to go back to Red's farm where he has a whole crop of marijuana ready for pickin'. On the way, the cops chase them for speeding, and when they get to the field, they see a large UFO which is sucking up weed from the field with a beam of light. Red and Chong get taken up into the UFO next and the craft flies away into the night. 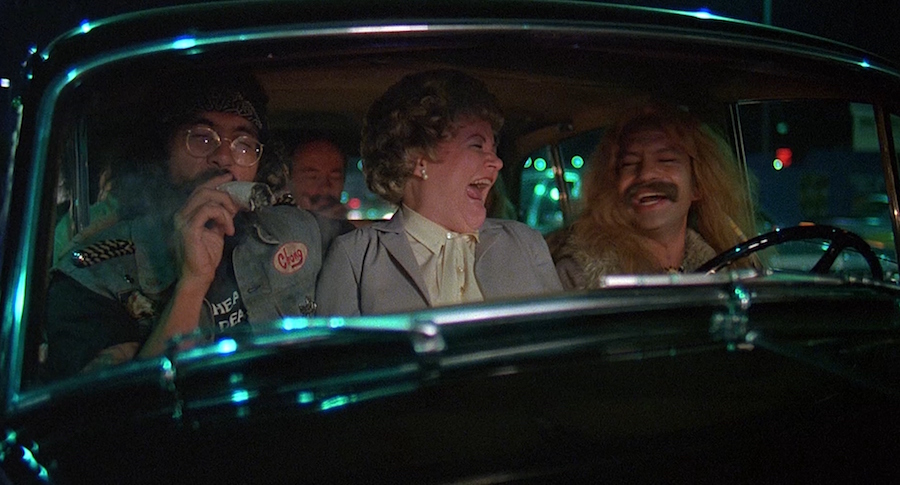 Meanwhile Cheech has a date with Donna and he's waiting for her to get there. He irons all his clothes out of boredom and he swigs some tequila. He passes out and dreams about her, but in his blissful dream his annoying neighbor shows up and starts screaming at him. When Donna finally arrives, Cheech is screaming in his sleep at his neighbor to "GET OUT! GO AWAY!". Donna hears this and mistakenly thinks Cheech is yelling at HER. She gets in her car and speeds off angrily. 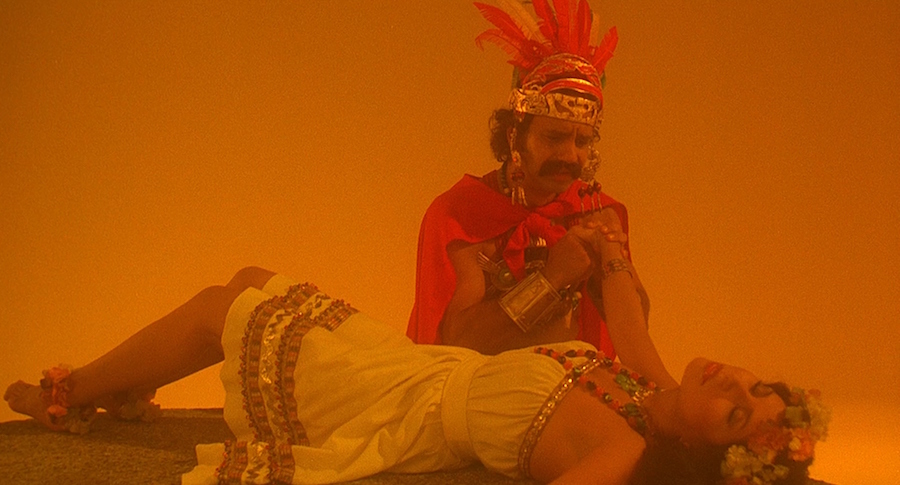 NEXT MOVIE is a really entertaining follow up to their cult hit UP IN SMOKE. It's got all the off the wall screwball humor the legendary comedy duo are best known for and provides yet another wacky, stoned out, one of a kind adventure that you'll want to revisit again and again.