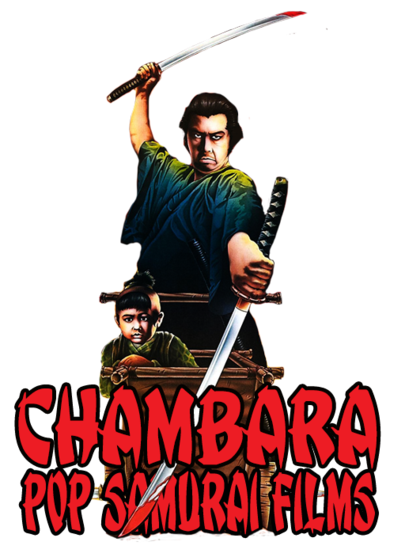 The Pop Samurai films of the 60s and 70s were also known as Chambara. These films were usually set in Japan's feudal Edo period (1603-1867). The stories and themes about good overcoming evil were very common. Most chambara characters were based on historical figures, but the plots were rarely accurate accounts. While costumes and even the period language often resembled the feudal era, writers and directors frequently took liberties with many other historical details. Spurting fountains of bright red blood, revenge and honor are just a few of the main ingredients in the classic Pop Samurai film. These films differed from the classic samurai films by directors like Akira Kurosawa, in that they were exploitation films that featured graphic violence and were mostly shot in color.

The Lone Wolf and Cub film series took place in mid Eastern Japan sometime during the early Tokagawa Era (approx 1603-1868, also called the Edo period). It starred actor Tomisaburo Wakayama as Ogami Itto, the shogunate executioner who brought swift release to those ordered to commit seppuku (ritual suicide). In the start of the series, "Sword of Vengeance" Ogami is falsely accused of treason by the evil Yagyu clan. He is then stripped of his position and his wife is murdered by the Yagyu assassins.

Ogami gives his infant son, Daigoro, a choice between a bright colored toy ball and a sharp samurai sword. If Daigoro chooses the ball, Ogami will kill him and he will then join his mother in "the void". If he chooses the sword, he will join his father, who is now a Ronin (a samurai without a master) in a journey that will end in revenge and death.

THE FILMS: Sword of Vengeance, Babycart in Peril, Babycart in the Land of Demons, Babycart at The River Styx, Babycart to Hades, White Heaven in Hell, Shogun Assassin. 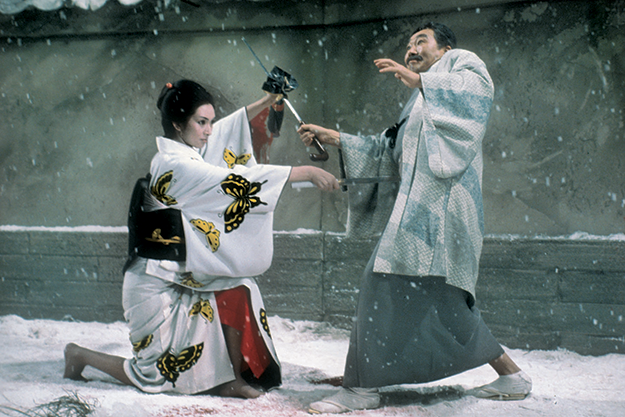 The Lady Snowblood films were based on a Japanese manga (comic strip) from the early 1970s co created by Kazuo Koike who also created the Lone Wolf and Cub manga series. Lady Snowblood starred Meiko Kaji as Shurayuki (Shura which means Buddhist term that means "hell" or netherworld" and "yuki" which means "snow"), a female samurai seeking revenge on the thugs who killed her father and raped her mother.

TRIVIA: The plot and characters in Lady Snowblood were a direct influence on Quentin Tarantino's 2003-04 grindhouse revenge opus KILL BILL.

The Zatoichi series were some of the most popular films in Japanese cinema. Starring the great Shintaru Katsu as a blind masseuse/swordmaster. The Zatoichi films combined serious intelligent stories with breathtaking action and comedy too. Between 1962 and 1973 there were 26 Zatoichi movies produced. A TV version was also produced in the mid 1970s. Zatoichi is the famous, fictional, blind masseur and roving gambler who, when innocent lives are threatened, becomes the ruthless swordsman who can cut down a dozen men -- yakuza and samurai alike -- before they know what hit them. He wandered the Japanese countryside in the early 1800s during the last years of the Tokugawa Shogunate, making a meager living by giving massages and gambling.

Although saddled with the physical handicap of blindness and the social handicap of living at the bottom of a rigid feudal class structure, Zatoichi manages to gain the upper hand with nearly everyone he meets, including the samurai or warrior class. He achieves this by using his good-natured wit, perceptive understanding of human nature, keen sense of hearing, and the lightning fast draw of his cane sword. Often humorous and always filled with sword-fighting action, the Zatoichi series of films has succeeded in attracting a worldwide following. Katsu Shintaro died June 21, 1997, of cancer at the age of 65. Affectionately called "Katsu-shin" by most Japanese, the talented actor and producer began his career in the 1940s. As a producer, he also created hit movies such as Lone Wolf and Cub, which starred his brother, Wakayama Tomisaburo, and Nemuri Kyoshiro aka Sleepy Eyes of Death series starring the popular actor, Ishikawa Raizo. 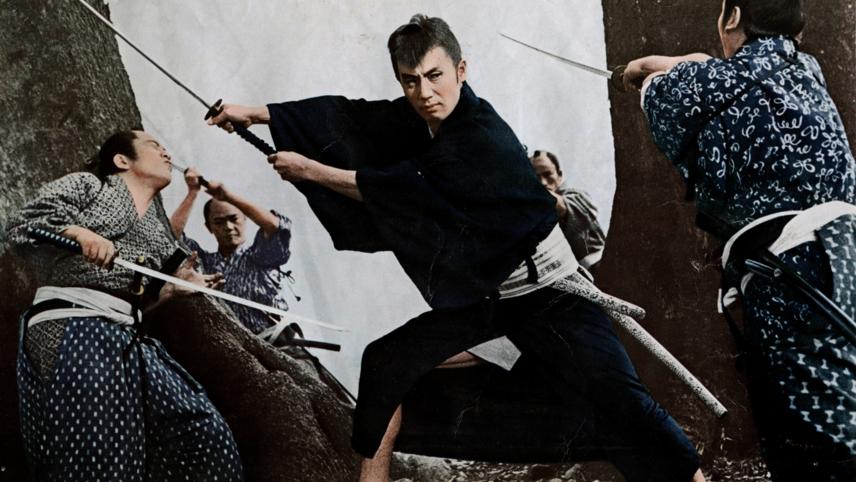 The Sleepy Eyes of Death films take place during the Tokugawa Era (approximately 1603-1868, also called the Edo Period), during the term of the 11th Tokugawa Shogun, Tokugawa Ienari who served 1787-1837. Nemuri Kyoshiro is a ronin of mixed marriage with a very mysterious background and history. His mother Japanese, his father a foreigner, he has no past and wants no future.

Played by Raizi Ishikawa, "the son of the Black Mass" is a half-breed warrior in search of a perfect death, driven by his hatred of Christianity and of the society in which he lives. Nemuri Kyoshiro's trademark fighting technique is the Engetsu-Sappo, literally meaning "The Full Moon Cut." It is a technique in which he draws a circle with his sword -- his opponent is always slain by the time the circle is completed. Sleepy Eyes of Death is one of the longest-running (12 films) and best-loved samurai series of all time. Actor Raizo Ichikawa sadly died at the age of 37.

THE FILMS: Chinese Jade, Sword of Adventure, Full Circle Killing, Sword of Seduction, Sword of Fire, Sword of Satan, The Mask of The Princess, Sword of Villainy, A Trail of Traps, Hell Is A Woman, In The Spider's Lair, Castle Menagerie.