Cave of the Living Dead/Review

< Cave of the Living Dead

When several girls in a small village start turning up dead, Interpol sends Inspector Doren (Adrian Hoven) to figure out what is going on. Every time a murder occurs, the power goes out, and it is out at the time Doren arrives. He thinks nothing of it until the slovenly police chief of the local police station bangs on his door in the morning, suspecting him of killing the inn's pretty maid (Erika Remberg) who happened to be staying in the room right next to his. The villagers think the girl's death is the work of a vampire, but the town's doctor (Carl Mohner) thinks it was a simple heart attack (despite the fact that there are two plainly visible fang marks on her neck which are completely disregarded by the doctor). 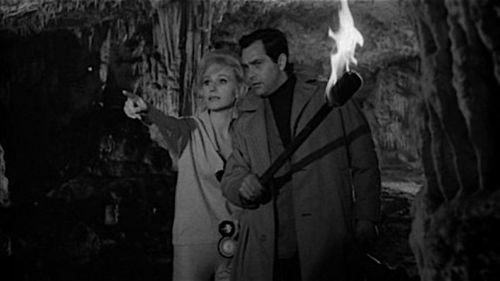 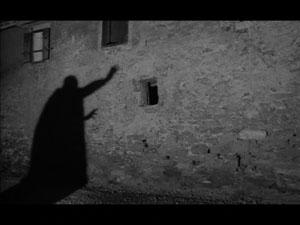 On his trip into town, Doren had run into Karin Schumann (Erika Remberg), a pretty assistant to the reclusive Professor Adelsberg (Wolfgang Priess), and instantly takes a liking to her. He gratefully accepts when Prof. Adelsberg sends his servant John (John Kitzmiller), an African American man that the entire town suspects of being the killer/vampire, shows up and passes along an invitation for him to stay at the Professor's castle. Little does he know, the townspeople have a good right to suspect that a vampire is loose in their town and Prof. Adelsberg does seem to have a nasty habit of dabbling in the occult...

Cave of the Living Dead was originally called The Curse of the Green Eyes, but the film was picked up by an American distributor who decided to change the title to something more marketable. Unfortunately, the new title suggests zombie hijinks, but this film is strictly vampiric in nature. When first introduced to this vampire element though, it almost seems lifted from F.W. Murnau's 1922 classic Nosferatu. The establishing shot of the vampire is his silhouette cast on a wall as he menacingly stalks towards his victim's window. When he reaches the window, his clawed hands grasp the window ledge and he climbs into the room, advancing slowly on his victim. The only thing that kills the connection is the dark hood over his head. Without this covering, I was completely expecting him to be pale with pointy ears and sharp rows of teeth. 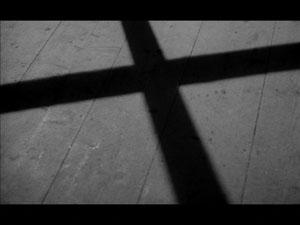 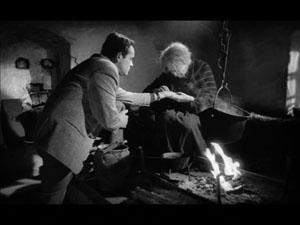 This film also seems to be trying to make a point about the negativity of racism. Most of the townspeople fear John because he is black and they distrust him because of that and the fact he is an outsider in their little town. Doren (and the evil Professor and his assistant Karin) find much to like about John though, and balk whenever someone casts dispersions on his name. This focuses a positive light on topics such as acceptance and pushing aside predetermined notions. The heart of the film's message is in the right place, but at times the character of John is portrayed as simple (and has some ridiculously overblown lines like "Do you think they [vampires] like black blood?", to which Doren literally responds, "No, but I like your black skin").

For a good portion of the film, the plot seems to be going nowhere. Doren spends part of the film searching for the ever vanishing corpse of the pretty inn maid who likes to get up and leave her coffin when no one's looking. He finds her at least twice (once at the bottom of a well and again, later, gnawing on Karin's neck) and then she attacks John as Doren and Karin move in to kill the head vampire. Most of the rest of his screen time features him dealing with the skeptical townspeople (especially the town's doctor and Thomas, played by Emmerich Schrenk, who is the town's deaf strongman). 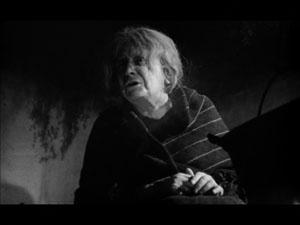 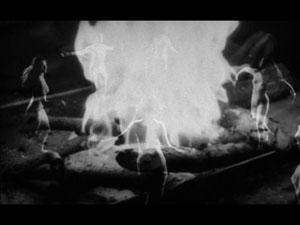 Cave of the Living Dead has been released on DVD as part of Image Entertainment's Euroshock Collection. The film is dubbed in English (with the most ponderous opening and closing music I have ever heard for a horror film) and is presented in its original aspect ratio of 1.66:1. The sepiatone image is remarkably preserved and perfectly show the reason why some films are better in black and white. No extras are included on the disc (unless you view chapter searches as a special feature).