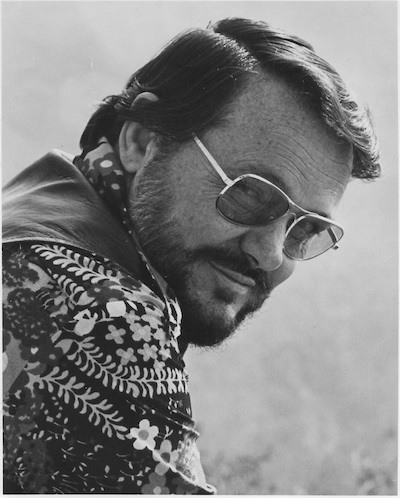 William "Bill" Rotsler (July 3, 1926 - October 8, 1997) was an American cartoonist and graphic artist; author of several science fiction novels and short stories, and television and film novelizations, and non-fiction works on a variety of topics, ranging from Star Trek to pornography; a prominent member of science fiction fandom; and a sculptor, primarily in metal, who contributed to the art at the entrance to the Los Angeles Police Department headquarters. He was also a participant in the production of numerous adult films.

Rotsler was known in science fiction fandom for his decades as a cartoonist and fan artist, winning five Hugo Awards in that category. He was famously willing to provide artwork for free to even the most obscure or struggling fanzines. Rotsler also devised a sort of friendly "cartoon duel", in which he crossed swords (or, rather, pens) with various other cartoonists, as follows: Rotsler and another cartoonist would each draw some sort of cartoon figure (human, animal or monster) simultaneously, with neither artist knowing what the other was drawing. The two figures would then be placed side by side to form one picture. Rotsler and the other cartoonist would then equip each of the two cartoon figures with a comic-strip "speech" balloon: each cartoonist creating and lettering the cartoon for the other artist's drawing.

Rotsler was known for his spontaneous cartooning, which would appear not only on paper, but on tablecloths, curtains, and anything near him. Hotels were often upset at this at science fiction conventions, and surprised when a "defaced" tablecloth brought in money at auction.

Rotsler came up with the title of Harlan Ellison's famous short story "I Have No Mouth, and I Must Scream." This was taken, with permission, from a caption of a Rotsler cartoon of a rag doll with no mouth.[1]

Rotsler's novelette "Patron of the Arts" was nominated for both the 1972 Nebula award and the 1973 Hugo award.

Rotsler was Fan Guest of Honor at Torcon II (the 1973 Worldcon); winner of the 1977 Down Under Fan Fund; and in 1996 was voted Past President of the Fan Writers of America.

The annual Rotsler Award "for long-time wonder-working with graphic art in amateur publications of the science fiction community" was established in 1998. The Award is ordinarily announced at Loscon, the Los Angeles science fiction convention held over the U.S. Thanksgiving Day weekend in November.

Rotsler's novels include Patron of the Arts (1974), To the Land of the Electric Angel (1976), Zandra (1978), and The Far Frontier (1980). As a Star Trek tie-in book writer, Rotsler proposed a first name, Nyota, for communications officer Uhura, whose first name was never mentioned in the original series. Both series creator Gene Roddenberry and actress Nichelle Nichols agreed to the adoption of this name, which means "star" in Swahili. This as Uhura's first name is also featured in the 2009 Star Trek film.

For ten years, he was the cameraman for Bill Warren as they traveled about Los Angeles shooting segments for the French TV series, Destination séries. Rotsler, like Warren, also appeared on camera in this series. He was a participant in the production of numerous "adults only" features produced by Harry Novak. His credits, sometimes under the pseudonym "Shannon Carse" include direction, camera and electrical department, writer, actor, editor, producer, and cinematographer on numerous Novak productions. Most notably, he directed the cult items Mantis in Lace (1968) and Agony of Love. Much of Rotsler's film work remains available from the cult-specialist video label Something Weird.[2]

Rotsler was also a sculptor (he located the fossils, crystals and stones for the Nebula Award trophies), and contributed to the 1994 computer game Inherit the Earth: Quest for the Orb.