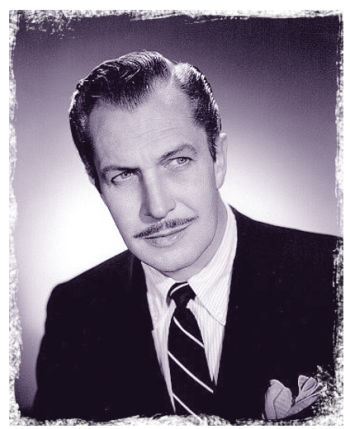 Vincent Leonard Price, Jr. (May 27, 1911 – October 25, 1993) was an American actor, well known for his distinctive voice and serio-comic performances in a series of horror films made in the latter part of his career.

Price was born in St. Louis, Missouri, the son of Marguerite Cobb (née Wilcox) and Vincent Leonard Price, Sr., who was the president of the National Candy Company.[1][2] His grandfather, Vincent Clarence Price, invented "Dr. Price's Baking Powder," the first cream of tartar baking powder, and secured the family's fortune.[3]

Price attended St. Louis Country Day School. He was further educated at Yale in art history and fine art. He was a member of the Courtauld Institute, London. He became interested in the theatre during the 1930s, appearing professionally on stage for the first time in 1935. [edit] Career As Mr. Manningham in Angel Street, in which he had a three-year run, photo by Carl Van Vechten, 1942.

He made his film debut in 1938 with Service de Luxe and established himself in the film Laura (1944), opposite Gene Tierney, directed by Otto Preminger. He also played Joseph Smith, Jr. in the movie Brigham Young (1940) and William Gibbs McAdoo in Wilson (1944) as well as a pretentious priest in The Keys of the Kingdom (1944).

Price's first venture into the horror genre was in the 1939 Boris Karloff film Tower of London. The following year he portrayed the title character in the film The Invisible Man Returns (a role he reprised in a vocal cameo at the end of the 1948 horror-comedy spoof Abbott and Costello Meet Frankenstein).

In 1946 Price reunited with Tierney in two notable films, Dragonwyck and Leave Her to Heaven. There were also many villainous roles in film noir thrillers like The Web (1947), The Long Night (1947), Rogues' Regiment (1948), and The Bribe (1949) with Robert Taylor, Ava Gardner, and Charles Laughton. His first starring role was as conman James Addison Reavis in the 1950 biopic The Baron of Arizona. He also did a comedic turn as the tycoon Burnbridge Waters, co-starring with Ronald Colman in Champagne for Caesar. He was active in radio, portraying the Robin Hood-inspired crime-fighter Simon Templar in The Saint that ran from 1943 to 1951.

In the 1950s, he moved into horror films, with a role in House of Wax (1953), the first 3-D film to land in the year's top ten at the North American box office, then The Mad Magician (1954), and then the monster movie The Fly (1958) and its sequel Return of the Fly (1959). Price also starred in the original House on Haunted Hill (1959) as the eccentric millionaire Fredrick Loren. He played Dr. Warren Chapin, in The Tingler, a 1959 horror-thriller film by the American producer and director William Castle. Price also appeared to great effect in the radio drama Three Skeleton Key, the story of an island lighthouse besieged by an army of rats. He first performed the work in 1950 on Escape and returned to it in 1956 and 1958 for Suspense.[4]

Outside of the horror genre, Price played Baka (the master builder) in The Ten Commandments. In the 1955–1956 television season he appeared three times as Rabbi Gershom Seixos in the ABC anthology series, Crossroads, a study of clergymen from different denominations. About this time he also appeared on NBC's The Martha Raye Show.

In the 1960s, Price had a number of low-budget successes with Roger Corman and American International Pictures (AIP) including the Edgar Allan Poe adaptations The House of Usher (1960), The Pit and the Pendulum (1961), Tales of Terror (1962), The Comedy of Terrors (1963), The Raven (1963), Masque of The Red Death (1964), and The Tomb of Ligeia (1965). He starred in The Last Man on Earth (1964), the first adaptation of the Richard Matheson novel I Am Legend. In 1968 Price portrayed witchhunter Matthew Hopkins in Witchfinder General [5] (released in the US as The Conqueror Worm). He starred in comedy films, notably Dr. Goldfoot and the Bikini Machine (1965) and its sequel Dr. Goldfoot and The Girl Bombs (1966). In 1968 he played the part of an eccentric artist in the musical Darling of the Day opposite Patricia Routledge.

Price often spoke of his pleasure at playing Egghead in the Batman television series. One of his co-stars, Yvonne Craig (Batgirl), said Price was her favorite villain in the series. In an often-repeated anecdote from the set of Batman, Price, after a take was printed, started throwing eggs at series stars Adam West and Burt Ward, and when asked to stop, replied, "With a full artillery? Not a chance!", causing an eggfight to erupt on the soundstage. This incident is reenacted in the behind-the-scenes telefilm Return to the Batcave: The Misadventures of Adam and Burt. In the 1960s, he began his role as a guest on the game show Hollywood Squares, even becoming a semi-regular in the 1970s, including being one of the guest panelists on the finale in 1980.[6] He was known for usually making fun of Rose Marie's age, and using his famous voice to answer questions in a playfully menacing tone.

During the early 1970s, Price hosted and starred in BBC Radio's horror and mystery series The Price of Fear. Price accepted a cameo part in the Canadian children's television program The Hilarious House of Frightenstein (1971) in Hamilton, Ontario, on the local television station CHCH. In addition to the opening and closing monologues, his role in the show was to recite poems about the show's various characters, sometimes wearing a cloak or other costumes.[7] He appeared in The Abominable Dr. Phibes (1971), its sequel Dr. Phibes Rises Again (1972), and Theater of Blood (1973), in which he portrayed a pair of campy serial killers. That same year Price appeared as himself in Mooch Goes to Hollywood, a film written by Jim Backus. Price recorded dramatic readings of Edgar Allan Poe's short stories and poems, which were collected together with readings by Basil Rathbone.

Price greatly reduced his film work from around 1975, as horror itself suffered a slump, and increased his narrative and voice work, as well as advertising Milton Bradley's Shrunken Head Apple Sculpture[8]. Price's voiceover is heard on Alice Cooper's first solo album, Welcome to My Nightmare from 1975, and he also appeared in the corresponding TV special Alice Cooper: The Nightmare. He starred for a year in the early 1970s in a syndicated daily radio program, Tales of the Unexplained. He made guest appearances in a 1970 episode of Here's Lucy showcasing his art expertise and in a 1972 episode of ABC's The Brady Bunch, in which he played a deranged archaeologist. In October 1976, Price appeared as the featured guest in an episode of The Muppet Show.

In 1982, Price provided the narrator's voice in Vincent, Tim Burton's six-minute film about a young boy who flashes from reality into a fantasy where he is Vincent Price. That same year, he performed a sinister monologue on the title track of Michael Jackson's Thriller album. A longer version of the rap, sans the music, along with some conversation can be heard on Jackson's 2001 remastered reissue of the Thriller album. Part of the extended version can be heard on the Thriller 25 album, released in 2008. In 1983 Price played the Sinister Man in the British spoof horror film Bloodbath at the House of Death starring Kenny Everett, and he also appeared in the film House of the Long Shadows, which teamed him with Christopher Lee, Peter Cushing, and John Carradine. While Price had worked with each one of them at least once in the prior decade, this was the first teaming of all of them together. One of his last major roles, and one of his favorites, was as the voice of Professor Ratigan in Walt Disney Pictures' The Great Mouse Detective in 1986.[9]

From 1981 to 1989, he hosted the PBS television series Mystery! In 1985, he provided voice talent on the Hanna-Barbera series The 13 Ghosts of Scooby-Doo as the mysterious Vincent Van Ghoul, who aided Scooby-Doo, Scrappy-Doo, and the gang in recapturing 13 evil demons. During this time (1985–1989), he appeared in horror-themed commercials for Tilex bathroom cleanser. In 1984, Price appeared in Shelley Duvall's live-action series Faerie Tale Theatre as the Mirror in "Snow White and the Seven Dwarfs", and the narrator for "The Boy Who Left Home to Find Out About the Shivers". In 1987, he starred with Bette Davis, Lillian Gish, and Ann Sothern in The Whales of August, a story of two sisters living in Maine, facing the end of their days. In 1989, Price was inducted into the St. Louis Walk of Fame. His last significant film work was as the inventor in Tim Burton's Edward Scissorhands (1990).

A witty raconteur, Price was a frequent guest on The Tonight Show Starring Johnny Carson, where he once demonstrated how to poach a fish in a dishwasher. Price was a noted gourmet cook and art collector. He also authored several cookbooks and hosted a cookery TV show, Cooking Pricewise.

From 1962 to 1971, Sears-Roebuck offered the "Vincent Price Collection of Fine Art", selling about 50,000 pieces of fine art to the general public. Price selected and commissioned works for the collection, including works by Rembrandt, Pablo Picasso, Salvador Dalí,[10] and Nate Dunn.[11]

Price was a lifelong smoker. He suffered from emphysema and Parkinson's disease; his symptoms were especially severe during the filming of Edward Scissorhands, making it necessary to cut his filming schedule short.

His illness also contributed to his retirement from Mystery!, as his condition was becoming noticeable on-screen.[citation needed] He died of lung cancer on October 25, 1993, at UCLA Medical Center at the age of 82. He was cremated and his ashes scattered off Point Dume in Malibu, California.[16]

In 1951, impressed by the spirit of the students and the community's need for the opportunity to experience original art works first hand, Price donated some 90 pieces from his own collection to East Los Angeles College in Monterey Park, California, thus establishing the first "teaching art collection" owned by a community college in the U.S. The collection contains over 9,000 pieces and has been valued in excess of $5 million.[17]

Price was an Honorary Board Member, and strong supporter until his death, of the Witch's Dungeon Classic Movie Museum located in Bristol, Connecticut. The museum features detailed life-size wax replicas of characters from some of Price's films, including The Fly, The Abominable Dr. Phibes, and The Masque of the Red Death.[18] A black box theater at Price's alma mater, Mary Institute and St. Louis Country Day School, is named after him.

Director Tim Burton directed a short stop-motion film as a tribute to Vincent Price called Vincent, about a young boy named Vincent Malloy who is obsessed with the grim and macabre. It is narrated by Price. "Vincent Twice, Vincent Twice" was a parody on Sesame Street. He was parodied in an episode of The Simpsons ("Sunday, Cruddy Sunday"). Price even had his own Spitting Image puppet, who was always trying to be "sinister" and lure people into his ghoulish traps, only for his victims to point out all the obvious flaws. The October 2005 episode of the Channel 101 series Yacht Rock featured comedian James Adomian as Vincent Price during the recording of Michael Jackson's "Thriller". Starting in November 2005, featured cast member Bill Hader of the NBC sketch comedy/variety show Saturday Night Live has played Price in a recurring sketch where Vincent Price hosts botched holiday specials filled with celebrities of the 1950s and '60s. Other cast members who have played Price on SNL include Dan Aykroyd and Michael McKean (who played Price when he hosted a season 10 episode and again when he was hired as a cast member for the 1994–95 season).

In 1999, a frank and detailed biography written by his daughter, Victoria Price, about her father was published by St. Martin's Press. In late May 2011, an event was held by the organization Cinema St. Louis to celebrate what would have been Price's 100th Birthday.[19] It included a public event with Victoria at the Missouri History Museum and a showcase of ephemeral and historic items at the gallery inside the Sheldon Concert Hall.[20][21]

The following 38 pages are in this category, out of 38 total.