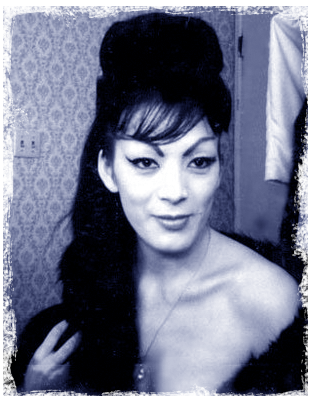 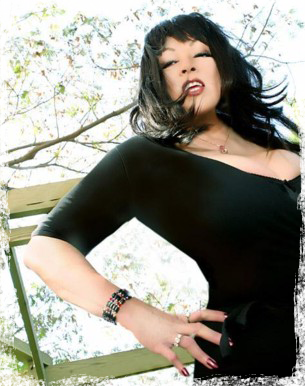 Suvaki Yamaguchi aka Tura Satana (July 10, 1938 - February 4, 2011) was born in Hokkaido, Japan. Her father was a movie actor and her mother a circus contortionist. Having emigrated to the USA part of her childhood was spent in a Japanese internment camp during World War 2.

It was in Chicago aged only 9 that Suvaki was attacked and raped by a gang of five men. Her father taught her martial arts as a means of self-defence and she went on to become a black belt in karate. Later she alleged that her skills were put to another use when, in the years following the attack, she tracked down each of the men she held responsible.

By age 13 Suvaki was working as a singer in Los Angeles. By age 15 she was dancing nude. Tura Satana was truly born on stage and she quickly became a burlesque sensation; one minute she’d be twirling her tassels at 100 rpm the next she’d be breaking some joker’s jaw for disrespectful heckling.

After appearing in a handful of TV shows (including The Man From U.N.C.L.E), and having turned down a marriage proposal from Elvis Presley, in 1966 Tura landed the lead in one of the greatest exploitation films of all time, Russ Meyer’s Faster Pussycat! Kill! Kill!. As sociopathic thrill-seeker Varla she dominates every scene she is in whether chugging frenetically at a go-go bar, putting the pedal to the metal in a desert drag race or snapping some puny goon’s spine with her bare hands. All the while letting rip with some of the most wickedly cool dialogue ever committed to celluloid.

Russ & Tura were birds of a feather: Meyer was used to dominating his cast and crew with maniacal military bluster, Satana was her own boss and god help any fool who pissed her off, and the two famously clashed over Meyer’s strict policy of no sexual relations on set. Nobody breaks Meyer’s balls but Tura sure gave them a good squeeze.

Following ‘Pussycat’ Tura starred in 2 movies directed by another exploitation maverick Ted V. Mikels: sci-fi oddity The Astro Zombies & Charlie’s Angels prototype The Doll Squad. Unfortunately this would mark the end of Tura Satana’s film career for many years and her life continued to be littered with drama and violence. In the mid 70’s she was shot by a former lover and in 1981 her back was broken in a car crash.

Almost 30 years after the original Tura re-united with Mikels for 2002’s belated sequel ‘Mark Of The Astro-Zombies’ and in 2009 she lent her voice to a cartoon cameo in Rob Zombie’s animated grindhouse throwback ‘The Haunted World Of El Superbeasto’.

Exploitation films often come under criticism for their depiction of women but this is just as often an ignorant and misdirected attack. While mainstream movies frequently drop-kick female intelligence into the gutter by perpetuating the insipid men-dependent, chocolate-addicted, neurotic capitalist stereotypes of ‘Bridget Jones’ & ‘Sex & The City’ exploitation films have consistently placed women in both the narrative driver’s seat and in positions of most audience empathy. Whether it’s Carrie White’s pubescent psychic vengeance or Pam Grier’s one woman vigilante payback, the ‘slasher’ genre’s surviving-by-her-wits-alone ‘final girl’ heroines or the kung-fu athleticism of Angela Mao and Sue Shihomi exploitation films have always transgressed the rules of mainstream cinema and this extends to gender politics.

Tura Satana could only have been a star in exploitation movies. She’s simply too hot, too abrasive, too ‘fuck you’ for the mainstream. Tura Satana is not objectified by the male gaze; we are but moths drawn to her flame.