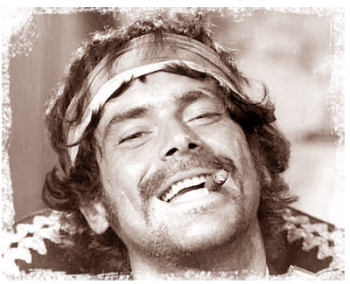 Tomás Quintín Rodriguez aka Tomás Milián (March 3, 1933 - March 2017) was a Cuban-American actor. He is known to cult-exploitation film fans as a popular star of spaghetti western & poliziotteschi genre films of the 1960s and 70s. Milian tried working as an actor in the United States, but was unsuccessful so he relocated to pursue acting jobs in Italy, where he gradually became a big success. Although his voice was dubbed most of the time due to his accent, Milian performed his lines in Italian (or in English, depending on the film). He got his start in arthouse films and worked with directors such as Mauro Bolognini and Luchino Visconti. He soon became a star in spaghetti westerns, where he often played Mexican bandits or revolutionaries, roles in which he spoke in his real voice. As the genre began to lose its momentum, Milian remained a star in many other genre films, often playing the villain in poliziotteschi. He later turned to comedy, playing the recurrent characters of petty thief Monnezza and Serpico-like police officer Nico Giraldi in a variety of films. Although his voice was dubbed most of the time by Ferruccio Amendola, Milian wrote his own lines in Roman slang. Milian's inventive use of romanesco (roman dialect) made him somewhat of a cult performer in Italy, even though his later films were critically panned. As Milian used similar makeups and accents in portraying both characters, Monnezza and Nico were occasionally confused by Italian audiences, who sometimes referred erroneously to them both as Monnezza, or Er Monnezza (Da trash in slang), and still closely associate Milian with these performances.

The following 19 pages are in this category, out of 19 total.