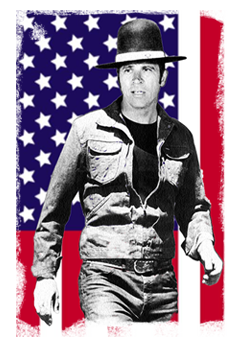 Tom Laughlin (August 10, 1931 - December 12, 2013) (aka pseudonyms T.C. Frank, Don Henderson, Mary Rose Solti, Frank Laughlin, Frank Christina, Lloyd E. James) was an American actor, director, screenwriter, author, educator and political activist. Laughlin is best known for his series of Billy Jack films. He was married to Delores Taylor in 1954. Taylor also co-produced and acted in all four of the Billy Jack films. His unique promotion of The Trial of Billy Jack was a major influence on the way films are marketed. In the early 1960s, Laughlin temporarily left his film career behind to start a Montessori preschool in Santa Monica, California; it became the largest school of its kind in the United States. He later became increasingly involved in politics, running for President of the United States three times (1992, 2004 and 2008). He also was involved in psychology and domestic abuse counseling, writing several books on Jungian psychology and developing theories on the causes of cancer. Tom died in 2013 but thanks to his dedication to humanitarian work both in and outside the film business he remains an American icon.