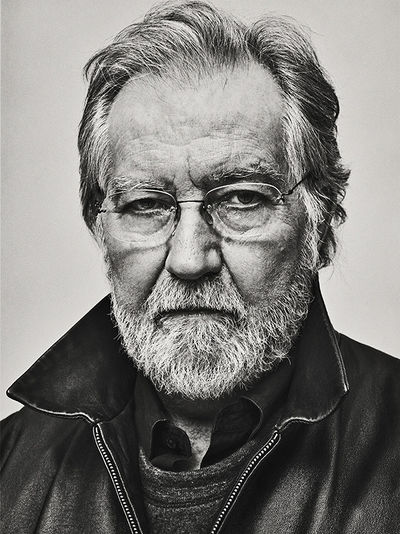 Tobe Hooper (January 25, 1943 - August 26, 2017) was an American film director and screenwriter, best known for his work in the horror film genre. His works include the cult classic The Texas Chainsaw Massacre (1974), along with its first sequel, The Texas Chainsaw Massacre 2 (1986); the three-time Emmy-nominated Stephen King film adaptation Salem's Lot (1979); and the three-time Academy Award-nominated, Steven Spielberg-produced Poltergeist (1982).

Hooper was born in Austin, Texas, the son of Lois Belle (née Crosby) and Norman William Ray Hooper,[1] who owned a theater in San Angelo. He first became interested in filmmaking when he used his father's 8 mm camera at age 9. Hooper took Radio-Television-Film classes at the University of Texas at Austin and studied drama in Dallas under Baruch Lumet.[2]

Hooper spent the 1960s as a college professor and documentary cameraman. His short film The Heisters (1965) was invited to be entered in the short subject category for an Oscar, but was not finished in time for the competition that year.[2] In 1969, Hooper wrote, directed and edited Eggshells, a film about a group of hippies in a commune house having to deal with the presence of a possible supernatural force. Eggshells did not receive a theatrical release, but did win Hooper several awards, including the Atlanta Film Festival Award, when the film played around different colleges. Hooper had shot over 60 documentaries, commercials, and short films before making The Texas Chain Saw Massacre. His intention was to go to Hollywood to become a feature film director.

In 1974, he organized a small cast composed of college teachers and students, and with Kim Henkel, on a budget of $60,000 (which eventually rose to $70,000, though some reports say up to $120,000) made The Texas Chainsaw Massacre. Hooper claims to have come up with the idea for The Texas Chain Saw Massacre while standing in the hardware section of a crowded store. While thinking of a way to get through the crowd, he spotted chainsaws for sale. The highly successful film changed the horror film industry and landed Hooper in Hollywood. Media reports of audiences throwing up and storming out of theaters showing the film swept the nation. Hooper wanted an MPAA PG rating for The Texas Chain Saw Massacre, as there was no PG-13 at the time. Despite having no sex or sexual situations, no drug use, no hard profanity, and a low level of graphic violence, the film received an R rating. The MPAA cited the film's intense tone as reason enough to issue the R rating.

Hooper then received a call from Marty Rustam to direct his first Hollywood film, Eaten Alive (1977). Hooper and Henkel re-wrote most of Rustam and Alvin Fast's script to fit their own desires. Eaten Alive starred Mel Ferrer, Carolyn Jones, William Finley, and Marilyn Burns, who played the lead role in The Texas Chain Saw Massacre. Some critics noted that Hooper tried to recreate Chainsaw, but did not succeed in terms of intensity. The main reason for this was that Hooper felt the producers were compromising his vision by exerting control over the film. As a result of this, Hooper left the set with three weeks of principal photography remaining. After Hooper's departure, Carolyn Jones, and the editor, Michael Brown, reportedly finished directing the final weeks of the film.

Richard Kobritz, producer of the suspenseful and acclaimed John Carpenter telefilm, Someone's Watching Me! (1978), handpicked Hooper to direct an adaptation of Stephen King's vampire novel 'Salem's Lot. The novel had been a bestseller and had been in development for some time, with Hooper briefly attached under producer William Friedkin's supervision in 1977. Salem's Lot (1979) became Hooper's most polished and mainstream film to date. The telefilm was well-received by critics and fans alike, and is generally thought of as a genre classic.

In 1981, Hooper directed the film, The Funhouse. The story involved four teenage friends who decide to spend the night in the funhouse of a sleazy traveling carnival. The film opened to modest box office receipts and received mainly positive reviews. Hooper had a shooting schedule similar in length to Salem's Lot, but nowhere near the same budget. One of the most praised aspects of the film was its visually stylish cinematography.

In 1981, Steven Spielberg suggested Tobe Hooper direct an alien invasion film entitled Night Skies. Skies would feature hostile aliens attacking a farmhouse with a family inside. However, Hooper had no interest in directing an alien invasion film after being fired from the production of another science fiction film, The Dark (1979). Night Skies would later be softened and turned into Spielberg's E.T. the Extra-Terrestrial (1982). While overseeing the final stages of The Funhouse at Universal, Hooper moved into Robert Wise's old office. Wise had left behind a book on the supernatural and ghosts. Hooper, already interested in ghost stories and a huge fan of Wise's classic film The Haunting (1963), asked Spielberg about his interest in the supernatural. Spielberg, also a fan of the topic, decided to write a script for Hooper to direct. In 1982, Hooper directed Poltergeist for MGM, with Spielberg serving as co-writer with Michael Grais and Mark Victor, and co-producer with Frank Marshall. It quickly became one of the top ten highest grossing films of the year. In addition to this, Hooper was nominated for a Saturn Award for Best Director. As a result of the film's critical and commercial success, it seemed that Hooper would be propelled into Hollywood's A-list of directors. However, some industry insiders in Hollywood viewed the film as more of a Spielberg-directed film than a Hooper-directed film, despite Hooper's claims that he directed the film and did "half the storyboards himself".

Hooper was then offered a contract by Cannon Films to direct three films. The first was a science fiction thriller called Lifeforce (1985) about humanoid creatures from outer space who eventually cause the destruction of London. The film was based on the 1976 novel, The Space Vampires by Colin Wilson, Lifeforce was produced on a then huge budget of $25 million. Hooper was unhappy about the producers' decision to change the title of the film from the "fun sounding" Space Vampires to the more serious Lifeforce. He was even more troubled over the producers' decision to cut about 15 minutes of the film from the US release. Lifeforce failed to gross more than $12 million at the United States box office, but did well in overseas territories.

In 1986, Hooper remade the 1950s classic Invaders from Mars and directed the much-anticipated sequel to his first film, The Texas Chainsaw Massacre 2. Due to the failure of Lifeforce, the budget for Invaders from Mars was repeatedly slashed by the studio, and the film eventually failed at the box office, opening to mixed reviews from critics. Hooper's next film, The Texas Chainsaw Massacre 2, starred Dennis Hopper and had a budget of $4 million. The extra funding provided "Hollywood" production values in comparison to the microbudgeted original. However, the film failed to impress fans as it focused on black comedy and over the top gore instead of attempting to be genuinely scary. Nevertheless, the film now has a wide cult following. An uncut DVD version called "The Gruesome Edition" was released in October 2006 by MGM. It contains deleted scenes, a "making of" documentary, and commentary by Hooper and others. From the three Cannon films made by Hooper, The Texas Chainsaw Massacre 2 was the only one to make back its budget at the box office. [edit] After Cannon

Hooper's film career stalled after the troubled productions at Cannon. In the late 1980s, and much of the 1990s, Hooper's reputation as a bankable director was questioned due to the failure of the three films he made at Cannon. When combined, Hooper budgets came to a little more than $40 million, with a total box office income of $25 million. In 1989, Hooper had written a script treatment for a third Texas Chainsaw film, but never developed it further. Instead, he chose to focus on Spontaneous Combustion (1990), a thriller starring Brad Dourif. The film was shot on a budget of around $5 million, but was not successful. Hooper blamed this on constant rewrites and producer restraints. Hooper's next film, Night Terrors (1993) was released straight to video. Hooper would end the decade with two other poorly received films, The Mangler (1995) and Crocodile (2000).

In 2002, Hooper directed the pilot for the miniseries Taken. The same year, it was announced that New Line Cinema and Michael Bay would be remaking Texas Chainsaw Massacre. Hooper served as producer on The Texas Chainsaw Massacre (2003), which became a box office success, grossing $120 million worldwide. In early 2003, Hooper himself remade a 1970s film entitled The Toolbox Murders (1978). Toolbox Murders (2004) received some of Hooper's best critical reviews in years.

From 2005-2006, Showtime aired the Mick Garris-produced series, Masters of Horror. Hooper directed two episodes, Dance of the Dead (2005) and The Damned Thing (2006). The series allowed Hooper and other directors "final cut" approval, which meant freedom from interference by producers.

Hooper began shooting a paranormal thriller, called "Djinn" in April 2011. The film is in the UAE and will be released in 2012.

In June 2009, it was revealed that Hooper would be writing a horror novel, due to be released in Summer 2011. Midnight Movie, which chronicles the bizarre aftermath of a screening of Hooper's student film Destiny Express, was published by Three Rivers Press in July 2011.

In 2010, writer and actor Mark Gatiss interviewed the director for his BBC documentary series A History of Horror; Hooper appeared in the third episode.[4]