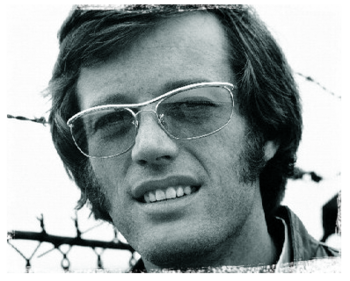 Peter Henry Fonda (February 23, 1940 - August 16, 2019) was an American actor and filmmaker. The son of Henry Fonda, brother of Jane Fonda, and father of Bridget and Justin Fonda (by first wife Susan Brewer, stepdaughter of Noah Dietrich). Fonda is an icon of the counterculture of the 1960s.[1][2]

Fonda's first counterculture-oriented film role was the lead character Heavenly Blues, a Hells Angels chapter president, in the Roger Corman directed b-movie, The Wild Angels (1966). Then Fonda played the male lead character in Corman's film The Trip (1967), a take on the experience and consequences of consuming LSD.

In 1968, Fonda produced and starred in Easy Rider, the classic film for which he is best known. Easy Rider is about two long-haired bikers traveling through the southwest and southern United States in a world of intolerance and violence. The Fonda character was the charismatic, laconic "Captain America" whose motorcycle jacket bore a large American flag across the back. Dennis Hopper played the garrulous "Billy". Jack Nicholson was nominated for an Academy Award for Best Supporting Actor for his turn as George Hanson, an alcoholic civil rights lawyer who rides along. Fonda co-wrote Easy Rider with Terry Southern and Hopper, who directed.

Hopper filmed the cross-country road trip depicted in Easy Rider almost entirely on location. Fonda had secured funding in the neighborhood of $360,000 - (largely based on the fact he knew that was the budget Roger Corman needed to make The Wild Angels),[3] and the film was released in 1969 to international success. Robbie Robertson was so moved by an advance screening that he approached Fonda and tried to convince him to let him write a complete score, even though the film was nearly due for wide release. Fonda refused, using Steppenwolf's "Born to Be Wild" and Dylan's "It's Alright Ma, I'm Only Bleeding" sung by the Byrds' Roger McGuinn, among many other tracks. Fonda, Hopper and Southern were nominated for the Academy Award for Best Original Screenplay.

Fonda went on to star in several popular cult/exploitation films in the 1970s including Dirty Mary Crazy Larry, Fighting Mad, Open Season, Race With The Devil, Futureworld (the sequel to Westworld) and High Ballin'.[4]