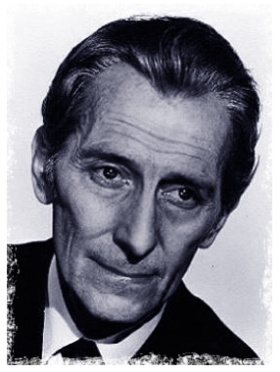 Peter Wilton Cushing, OBE (26 May 1913 – 11 August 1994) was an English actor, known for his many appearances in Hammer Films, in which he played the distinguished-looking but sinister scientist Baron Frankenstein and the vampire hunter Dr. Van Helsing, amongst many other roles, often appearing opposite Christopher Lee, and occasionally Vincent Price. A familiar face on both sides of the Atlantic, his most famous roles outside of "Hammer Horror" include his many appearances as Sherlock Holmes, as Grand Moff Tarkin in Star Wars (1977) and as the mysterious Doctor in Dr. Who and the Daleks and Daleks - Invasion Earth 2150 AD in 1965 and 1966, two cinema films based on the television series Doctor Who.

Cushing was born in Kenley, Surrey, a son of George Edward Cushing and Nellie Marie (King) Cushing.[1] He was brought up in Kenley and in Dulwich, South London. Cushing left his first job as a surveyor's assistant to take a scholarship at the Guildhall School of Music and Drama. After working in repertory theatre in Worthing, Sussex,[2] he left for Hollywood in 1939, debuting in The Man in the Iron Mask, then returned in 1941 after roles in several films. In one, A Chump at Oxford (1940), he appeared alongside Laurel and Hardy. His first major film part was as Osric in Laurence Olivier's Hamlet (1948).

In the 1950s, he worked in television, notably as Winston Smith in the BBC's adaptation of the George Orwell novel Nineteen Eighty-Four (1954) scripted by Nigel Kneale. Cushing drew much praise for his performance in this production, although he always felt that his performance in the surviving version of the broadcast — it was performed live twice in one week, then a common practice, and only the second version exists in the archives — was inferior to the first. Among many of his small screen performances, Cushing starred as Fitzwilliam Darcy in the BBC's 1952 production of Pride and Prejudice and as King Richard II in Richard of Bordeaux in 1955.

His first appearances in his two most famous roles were in Terence Fisher's films Curse of Frankenstein (1957) and Horror of Dracula (1958). Cushing is closely associated with playing Baron Victor Frankenstein and Van Helsing in a long string of horror films produced by Hammer Film Productions. He later said that career decisions for him meant choosing roles where he knew the audience would accept him. "Who wants to see me as Hamlet? Very few. But millions want to see me as Frankenstein so that's the one I do."[3] He said "If I played Hamlet, they'd call it a horror film."[citation needed]

Cushing was often cast opposite the actor Christopher Lee, who became his best friend. "People look at me as if I were some sort of monster, but I can't think why. In my macabre pictures, I have either been a monster-maker or a monster-destroyer, but never a monster. Actually, I'm a gentle fellow. Never harmed a fly. I love animals, and when I'm in the country I'm a keen bird-watcher," he said in an interview published in ABC Film Review in November 1964.

In the mid-1960s, he played the Doctor in two films (Dr. Who and the Daleks and Daleks – Invasion Earth: 2150 A.D.) based on the television series Doctor Who. He decided to play the part as a lovable, avuncular figure to escape from his image as a "horror" actor. "I do get terribly tired with the neighbourhood kids telling me 'My mum says she wouldn't want to meet you in a dark alley'." he said in an interview in 1966. He appeared in The Avengers and its successor, The New Avengers. In 1986, he played the role of Colonel William Raymond in Biggles. In Space: 1999, he appeared as a Prospero-like character called Raan.

Cushing played Sherlock Holmes many times, starting with Hammer's The Hound of the Baskervilles (1959), the first Holmes film made in colour. Cushing seemed a natural for the part and he played the part with great fidelity to the written character - that of a man who is not always easy to live with or be around - which had not been done up to that point. He followed this up with a performance in 16 episodes of the BBC series Sir Arthur Conan Doyle's Sherlock Holmes (1968), of which only six episodes remain. Finally, Cushing played the detective in old age, in The Masks of Death (1984) for Channel 4.

In 1976, he was cast in Star Wars, which was shooting at Elstree Studios, Borehamwood. He appeared as Grand Moff Tarkin, despite having originally been considered for the role of Obi-Wan Kenobi. Cushing found accepting the role in a science fiction fantasy easy. "My criterion for accepting a role isn't based on what I would like to do. I try to consider what the audience would like to see me do and I thought kids would adore Star Wars." During production Cushing was presented with ill-fitting riding boots for the role and they pinched his feet so much that he was given permission by George Lucas to play the role wearing his slippers. The camera operators filmed him above the knees or standing behind the table of the conference room set.

For Star Wars Episode III: Revenge of the Sith, Lucas wanted Cushing, by then deceased, to reprise his role as Tarkin through the use of archive footage and digital technology, but poor film quality made this impossible. Additionally, the scene required a full-body appearance of Tarkin, which was unavailable because of Cushing's use of slippers instead of boots when performing. Instead, Wayne Pygram took the role. Pygram was cast because it was felt he strongly resembled Cushing, but even so, he underwent extensive prosthetic makeup for his brief cameo.

His final professional engagement was as co-narrator of Flesh and Blood, the Hammer Heritage of Horror, produced by American writer/director Ted Newsom. His narration was recorded in Canterbury near his home. The show was first broadcast in 1994, the week before his death.

Cushing died of prostate cancer on 11 August 1994, aged 81 in Whitstable, Kent, where he was well known as a local celebrity resident and had a local beauty spot named after him, "Cushing's View". In August 2011 pub company JD Wetherspoon named its local pub "The Peter Cushing" (the former Art Deco style cinema, originally the Oxford Picture Hall, had closed in 1984, and used as a bingo club until 2010).

In an interview on the DVD release of The Hound of the Baskervilles, Christopher Lee remarked on his friend's death: "I don't want to sound gloomy, but, at some point of your lives, every one of you will notice that you have in your life one person, one friend whom you love and care for very much. That person is so close to you that you are able to share some things only with him. For example, you can call that friend, and from the very first maniacal laugh or some other joke you will know who is at the other end of that line. We used to do that with him so often. And then when that person is gone, there will be nothing like that in your life ever again".

The following 45 pages are in this category, out of 45 total.