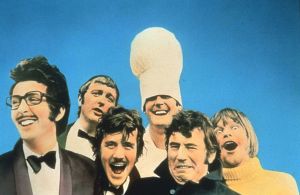 Monty Python are a British comedy troupe formed in 1969 by John Cleese, Graham Chapman, Eric Idle, Terry Jones, Michael Palin, and, as the lone American, animator Terry Gilliam. Their iconoclastic and highly influential BBC TV sketch comedy series Monty Python's Flying Circus debuted the same year, ending in 1974. They released five theatrical films and several albums before breaking up in the 1980s. They would later reunite for tours and documentaries.

The name "Monty Python" has never been explained, though John Cleese suggested that it was the name of a sleazy talent agent responsible for bringing them together.

The listed films cover both ensemble work and side projects. - Written by JKData