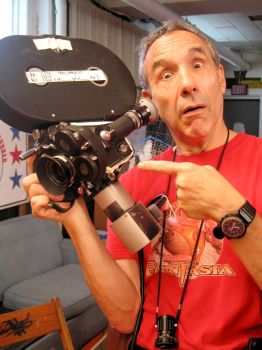 "In 30 years, Lloyd Kaufman, along with Yale friend and partner Michael Herz, has built Troma Studios up from a young company struggling to find its voice in a field crowded with competitors to legendary status as a lone survivor, a bastion of true independence, and the world’s greatest concentration of camp. Among Troma Entertainment’s library of over 1,000 movies are the early performances of such stars as Kevin Costner, Billy Bob Thornton, Samuel L. Jackson, Robert DeNiro, Dennis Hopper, Dustin Hoffman, Fergie (Black Eyed Peas) and countless others! As a filmmaker, Lloyd Kaufman has accumulated a remarkable list of credits, as well as a more extraordinary list of debits to loan sharks and pawn shops across New York.

In the late 1960’s, Kaufman was enrolled at Yale University (where he would later teach multiple Filmmaking Master Classes), diligently working on a respectable degree in Chinese Studies. However, Kaufman was destined for other things. As he explains in his hit book All I Need To Know About Filmmaking I Learned From The Toxic Avenger (published by Penguin Putnam), “At Yale I was placed in a dormitory room with two film fanatics, and I knew everything had irrevocably changed.” In fact, Kaufman was infected with a love of movies from which he never recovered.

In 1971, Kaufman met his future partner Michael Herz at Yale. The Troma Universe was born in 1974 with a series of highly original, sexy comedies such as Squeeze Play!, Waitress!, and other titles ending with an exclamation point. These movies, independent precursors to such later smash hits as National Lampoon’s Animal House and Porky’s, did well financially, although Kaufman continued to work on such outside productions as Rocky and Saturday Night Fever. Kaufman’s relationship with mainstream Hollywood would not last long. “There were problems,” Kaufman said, “as I always wanted to do things my own way and my employers insisted I do things the correct way.”

Kaufman proved his former employers wrong with his 1984 breakthrough movie, The Toxic Avenger. This tale of a health club mop boy named Melvin who is transformed into a hideously deformed creature of superhuman size and strength struck a chord with audiences and critics alike, demonstrating that there was a large number of people who were interested in seeing things done Kaufman’s way. The Toxic Avenger led to an animated television series, “Toxic Crusaders,” several different comic book titles (published by Marvel and, most recently, Troma’s own independent comic book imprint), and three sequels. The most recent film in the series is Citizen Toxie: The Toxic Avenger Part IV.

The success of The Toxic Avenger was followed by a string of commercial and artistic triumphs in a similar vein, blending fantasy, heavy action, comedy, and eroticism in a style that can only be described as “Tromatic”. These films, including the Class of Nuke ‘Em High trilogy, Sgt. Kabukiman NYPD, and Troma’s War, were often ignored or scorned by the intelligentsia of the time but spoke to an entire generation of young people who rejected the pandering, commercial films of the mid-to-late 80’s. Some of these Troma fans went on to become filmmakers themselves, including Quentin Tarantino, Kevin Smith, Mike Judge, Peter Jackson, and Trey Parker. Thanks to these admirers, Kaufman has been asked to make cameo appearances in films like Trey Parker’s Orgazmo and Eli Roth’s Cabin Fever.

Lately, Kaufman and the Troma Team have begun to win respect from even their harshest critics. Tromeo & Juliet became a surprise theatrical and critical hit, earning the grand prize at the Fanta Festival in Rome. Kaufman’s following opus, Terror Firmer, inspired by the book All I Need To Know About Filmmaking I Learned From The Toxic Avenger, played for six months in Los Angeles alone. In addition, Kaufman has been an honored guest at various international film festivals and Troma retrospectives around the world. The San Sebastian Film Festival, the British Film Institute, the Cinematheque Francaise, the American Cinematheque, the Chicago International Film Festival, the UCLA Film Archives, the Tokyo Film Festival, and the Shanghai International Film Festival are just a few of the venues to have showered Kaufman with praise and free booze. In 2003, Kaufman received the Lifetime Achievement Award at the Fantasy Film Festival of Amsterdam.

In January 2000, Kaufman founded the TromaDance Film Festival in Park City, Utah. Determined to give independent film back to the people, Kaufman established a festival where there is no entry fee to filmmakers to submit their films, nor is there any admission charged to audience members. The TromaDance Film Festival presents a broad spectrum of films and film styles, creating an opportunity for everyone to put their own personal vision on film and have it seen.

Kaufman is also a tireless innovator, constantly using new developments in technology to foster the growth of independent art. Troma has a dynamic web presence with Troma.com, TromaDance.com, and the newest site, Toxic Avenger.com. All three sites provide news and entertainment, as well as providing an outlet for Troma to sell videos, DVDs, clothing, Tromabilia, and other products from the Troma Universe directly to their fans. Troma has also been ahead of the curve in DVD production, releasing feature-packed titles since 1997.

Kaufman has also earned the respect and trust of his peers in the independent filmmaking community. He has served as Executive Vice Chairman of the American Film Marketing Association (AFMA). Thanks to his vision of independent cinema’s future on the Internet, Kaufman was asked to help create and currently chairs AFMA’s New Technologies Opportunities Committee.

Currently, Kaufman is hard at work promoting his acclaimed novelization of The Toxic Avenger (published by Thunder’s Mouth/Avalon Press), and his previous book, Make Your Own Damn Movie (published by St. Martin’s Press) has inspired a series of successful Lloyd Kaufman taught Master Classes at colleges and institutions across the country and the world! In addition, he created 20 half-hour television episodes for England’s Channel 4. The series, “Troma’s Edge TV,” brought UK viewers all the Tromatic superheroes, cutting-edge humor, and great music they’ve come to expect from Troma movies. Kaufman’s latest cellu-Lloyd masterpiece is the upcoming satire about the fast-food industry-zombie film, Poultrygeist, currently in post-production and planned for a 2007 theatrical release.

On the personal front, Lloyd Kaufman has three daughters - Lily Hayes, Lisbeth and Charlotte. He serves on the Board of Directors of the American Film Marketing Association and Trinity School. His beloved wife of 26 years, Patricia, is the New York State Film Commissioner."

Biography Used by Permission from LloydKaufman.com