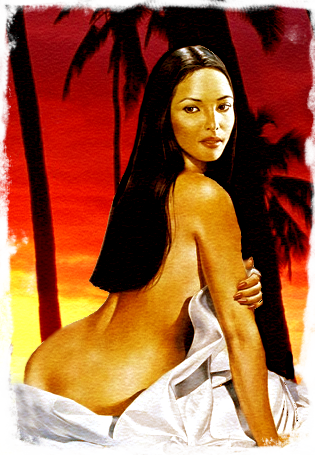 Laurette Marcia "Laura" Gemser (born October 5, 1950, Java, Indonesia) is a Dutch-based actress of Indo descent, now Italian citizen. She is known for her work with director Joe D'Amato and Bruno Mattei, in particular, for doing a set of exploitation-style and Emanuelle films. Gemser has also been credited as Moira Chen, most notably in Love Is Forever (1983).

Her lone mainstream credit was in the 1983 TV movie Love Is Forever, where she was credited as "Moira Chen", a name she used for Endgame that same year. The director insisted on her using a pseudonym because of her background in erotica. The crew were so nervous about what having her associated with the film would do to its reputation that they couldn't even call her "Laura" and had to call her "Rosalie." Gemser continued to do films: at times, she worked with her actor husband, Gabriele Tinti. In the 1990s, she left the movies to do costume designing for film. In addition, she lost her husband, who died of cancer in 1991. Today she lives in retirement and low profile in Rome.

The following 37 pages are in this category, out of 37 total.