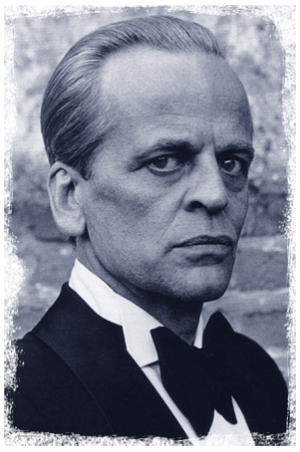 Klaus Kinski (October 18, 1926 – November 23, 1991) was one of the most eccentric and complicated actors in movie history. Born Nikolaus Karl Günther Nakszynski in Zoppot, Free City of Danzig (today Sopot, Poland) he was popular for his incredible talent in acting, but also for his excessive living and his bad manners. Klaus Kinski, born Nikolaus Günther Nakszynski, was born at the 18th of October in 1926 in Zoppot, Danzig (previously part of Germany, but what is now known as Sopot, Poland). He grew up in Berlin and soon began to play roles in the theatre and was acting on the stage. The first film in which we could see Kinski was called Morituri (1948). He had a small role as a Dutch prisoner. After he did some films like Decision Before Dawn (1951) and A Time to Love and A Time to Die (1958), he was soon in the thriller Scotland Yard jagt Dr. Mabuse (1963). This was one of the Edgar Wallace productions Kinski was working in and soon some filmmakers recognized this acting genius, but was no star at all. After the German Western Winnetou ­ 2. Teil (1964) and another Edgar Wallace film called Neues vom Hexer (1965), Kinski got his first important part in Sergio Leone's Spaghetti Western classic Per qualche dollaro in piú aka For a Few Dollars More (1965). Now, Kinski had opened himself a lot of doors. And in the same year of For A Few Dollars More, Kinski acted in Doctor Zhivago (1965), the legendary love story. After that Kinski again did a lot of flops, in 1967 he acted in an absolute Spaghetti Western classic called ¿Quien sabe? (1967) and was seen in the cool role of the character "El Santo". This movie, his second Western, became a cult film for fans of this great genre.

After that, Kinski did Ognuno per se (1968) and Uomo, l'orgoglio, la vendetta, L' (1968), another two Spaghetti Westerns. He had a bunch of fans, but he wasn't that star he's now. His groundbreaking role was with no doubt the one in Sergio Corbucci's The Great Silence (1968), a neo cult Western he acted in after a few movies like one of the "Sabata" series. This film showed Kinski at his best and after he became a legend of the genre. After Count Dracula (1970), a Jess Franco film and another few more movies, he did his first film with Werner Herzog, one of the most important European directors of all time. The film was Aguirre: Wrath of God (1972). This great epic showed Kinski's talent as a character actor and is often called Herzog and Kinski's best work. The powerful odyssey of Lope de Aguirre through a tropical forrest is not only brilliant acted, it's a physical balance of power. With Nosferatu: Phantom der Nacht (1979), Herzog and Kinski made their own homage to Friedrich M. Murnau's classic Nosferatu. Here, we could see Kinski in the role of Count Dracula. He gave this character another specific flair that was never seen on screen. We saw the disgusting Dracula, and not the Gentleman Dracula like Christopher Lee and Bela Lugosi acted. In the same year, Herzog and Kinski worked again and became great partners. Their films owned a lot of overwhelming critics. This new film was called Woyzeck (1979). In my opinion, Kinski showed his best performance of a lifetime here, because there was never such an intense role for Kinski to play like this really emotional and over-realistic one.

Herzog directed Fitzcarraldo in 1982. Guess who got the main part? Of course Klaus Kinski. He acted on the site of Jason Robards and Claudia Cardinale and Herzog did, ten years after his ultimate classic Aguirre, der Zorn Gottes, another big and really expensive epic tale. Herzog and Kinski's last collaboration was in 1987, when they both did Cobra Verde (1987). Very big differences between the two individuals came to light and that was one of the reasons why Cobra Verde wasn't that good like Herzog-Kinski's older productions. But it was still a remarkable film. In 1989, Kinski directed his first film which sadly became the last he directed/acted: Kinski Paganini (1989). This musical, very "cold" tale of Paganini was a very important art film, but it sadly became a flop. Kinski died on the 23rd of November in 1991. We will miss this acting legend.

The following 32 pages are in this category, out of 32 total.