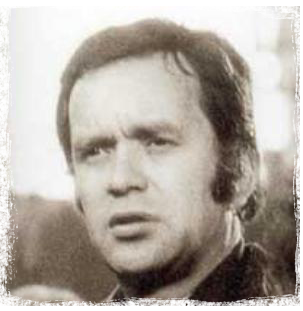 Juan López Moctezuma although a man of varied interests, is chiefly known among genre film fans worldwide for his three 1970s horror films, all of which were released in English-language versions: Dr. Tarr's Torture Dungeon, Alucarda, and Mary, Mary, Bloody Mary.

López Moctezuma was born in Mexico City in 1932, was the son of a judge, and his family originally wanted him to study law as well. However, the young man rebelled and eventually became involved in painting, the theater, and radio/TV work. In 1959, he created "Panorama de Jazz," a program on Radio UNAM that--although López Moctezuma left it after a few years--became an institution in Mexico and ran for more than 35 years. His last radio show ended in April 1995. López Moctezuma also worked in television for many years, mostly on "cultural" programs, and continued his stage career.

While López Moctezuma--in an interview with Beatriz Reyes Nevares for the book The Mexican Cinema: Interviews with 13 Directors (1974)--said he had always been fascinated by movies, his introduction to filmmaking came when he made the short films "Dios y libertad" (aka "Tierra de sombras"), "Blues por Silvia," and "La máquina de sumar." He also was a partner in a production company that made shorts. However, at the time (the 1960s) it was difficult to break into the Mexican film industry, and López Moctezuma went to work as an assistant to famous stage director Seki Sano. It was his theatrical work that led to his meeting with Alejandro Jodorowsky, a Chilean who was making a name as an avant-garde stage director in Mexico.

López Moctezuma collaborated with Jodorowsky on Fando y Lis (1967), and received an associate producer credit on Jodorowsky's famous cult film El Topo (1969). Like Jodorowsky, López Moctezuma worked in other fields besides cinema and his films would always be made on the fringes of the commercial film industry. His first feature was an Edgar Allan Poe adaptation, La mansión de la locura. Although this picture was very different in style and tone from El Topo, there are a number of connections between the two films, including producer Roberto Viskin, cinematographer Rafael Corkidi, and a number of performers (including some of the actors who played the bandits in El Topo, who show up as escaped mental patients in La mansión de la locura).

La mansión de la locura was a critical success, winning prizes at film festivals in Italy, Yugoslavia, Switzerland, and France. However, because López Moctezuma was--again, like Jodorowsky--a true auteur, he did not find a position as a director of "commercial" feature films. "I am fairly inflexible," he told Raquel Pequero in a 1994 interview (quoted in "La Jornada" on 4 August 1995), "In the artistic field I think I am fairly tough because I have principles I cannot betray."

As a result, it was three years before shooting started on his next project, the Hollywood co-production Mary, Mary, Bloody Mary (April 1974). In August 1975 he began Alucarda, la hija de las tinieblas. Both of these movies have received fairly wide international distribution over the years due to their English-language availability and the exploitable subject matter.

López Moctezuma did not make another film until late 1982. To Kill a Stranger was an "international" production starring Mexican singer/actress Angélica María (her husband at the time, Raúl Vale, was the producer), Donald Pleasance, and Dean Stockwell. Although To Kill a Stranger did receive some release, it is certainly one of López Moctezuma's lesser efforts. Welcome María was even less successful. Financed by the son of actor Mario Moreno "Cantinflas," the movie deals with the tribulations of a Mexican immigrant in the U.S.A., and received little or no release.

After a number of years away from the screen, López Moctezuma initiated several projects in 1993. One, El alimento del miedo, was based on the actual case of a woman in the 1950s or '60s who was caught selling tamales containing human flesh! Yo el vampiro was made as a pilot for television, and apparently consists of three separate episodes of approximately 22 minutes each, based on "classic" horror stories by authors like Edgar Allan Poe. These movies were the last projects made at the América studios (which subsequently closed and was sold to Azteca television), and have never been publicly screened.

After a long illness, Juan López Moctezuma died of a heart attack on 2 August 1995. He was 63 years old. He is survived by two daughters, Alessandra and Joanna. [1]