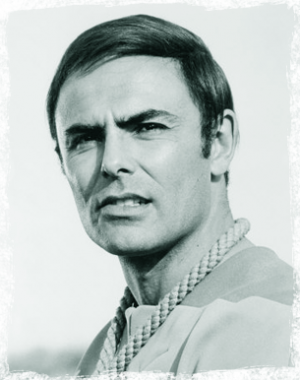 John Saxon (August 5, 1936 - July 25, 2020) was an American actor who worked on over 200 projects during the span of sixty years. Saxon is most known for his work in horror films such as A Nightmare on Elm Street and Black Christmas, both of which feature Saxon as a policeman in search of the killer. He is also known for his role as Roper in the popular 1973 action film Enter The Dragon, in which he starred with Bruce Lee and Jim Kelly.

Saxon, an Italian American,[2] was born Carmine Orrico in Brooklyn, New York, the son of Anna (née Protettore) and Antonio Orrico,[1] a dock worker. He attended New Utrecht High School and graduated in 1953 with Stanley Abramson. He then studied acting with famous acting coach Stella Adler and broke into films in the mid-1950s, playing teenage roles. According to Robert Hofler's 2005 biography, The Man Who Invented Rock Hudson: The Pretty Boys and Dirty Deals of Henry Willson,[3] agent Willson saw Saxon's picture on the cover of a detective magazine and immediately contacted the boy's family in Brooklyn. He brought the 16-year-old Orrico [citation needed] to Hollywood and renamed him Saxon.

After his first sizable role, as a juvenile delinquent in “Running Wild” (1955), he supported Esther Williams and George Nader in “The Unguarded Moment” (Universal, 1956), her first dramatic role since “The Hoodlum Saint” in 1946. Billing in advertising was “Co-starring the exciting new personality JOHN SAXON.”

In his early career, Saxon worked with many notable directors including Vincente Minnelli, Blake Edwards, John Huston, Frank Borzage, and Otto Preminger but, despite this, never developed into a major star. In 1963, Saxon co-starred with Letícia Román in Mario Bava's Italian giallo film, The Girl Who Knew Too Much. In 1966, he starred in Curtis Harrington's Sci-Fi / Horror classic, Queen of Blood, along with Basil Rathbone and Dennis Hopper. He portrayed Marco Polo in episode 26 of The Time Tunnel ("Attack of the Barbarians"), originally airing March 10, 1967. He went on to appear primarily in supporting roles in feature films, and won a Golden Globe Best Supporting Actor nomination for his portrayal of a Mexican bandit in the 1966 film The Appaloosa. He again played a Mexican, this time a revolutionary named Luis Chama, in 1972, supporting Clint Eastwood and Robert Duvall in Joe Kidd. In 1969-72, Saxon was one of three stars in the series The Bold Ones: The New Doctors. He did appear in Bruce Lee's 1973 Hollywood debut Enter The Dragon. In 1974-75, he starred in several episodes of the ABC produced mega-hit series The Six Million Dollar Man playing a number of characters, including the role of Major Frederick Sloan. His roles also extended into The Bionic Woman. The actor's likeness was later used for the Kenner action-figure doll called 'Maskatron' which was based on the series. Saxon played Hunt Sears, head of a breakfast cereal conglomerate, opposite Robert Redford and Jane Fonda in the 1979, Oscar-nominated film The Electric Horseman. In 1982, he appeared in the 1982 TV movie Rooster, and appeared on the last week of the game show "Whew!" His extensive television credits include three years as Dr. Ted Stuart on the series The Bold Ones: The New Doctors (1969-1972) and two years as Tony Cumson on Falcon Crest (1986-1988).

Saxon appeared in many Italian films, mainly in the spaghetti western and police thriller genres. Titles from these genres include One Dollar Too Many (1968) and Napoli violenta (1976). He was also the second incarnation of Dylan Hunt from the Gene Roddenberry shows called Planet Earth and Strange New World. More recently, Saxon may be best known as a supporting player in horror films, most notably Bob Clark's Black Christmas (1974) as the relatively smart leader of a bunch of dumb cops; in Dario Argento's Tenebre (1982) as the writer hero's shifty agent; in Mitchell (1975) as the murderous union lawyer and prostitute provider Walter Deaney; in Battle Beyond The Stars (1980) as Sador; in Cannibal Apocalypse (1980) where he played a Vietnam veteran tormented because his worthless pal bit him and years later, he is starting to get the urge to do the same; in Prisoners of the Lost Universe and in Wes Craven's A Nightmare on Elm Street (1984) as the heroine's (Nancy Thompson's) father. He revisited his role in A Nightmare on Elm Street 3: Dream Warriors (1987) and Wes Craven's New Nightmare (1994) as he played himself in a dual role. He starred in Maximum Force (1992) as Captain Fuller. He was a guest star on Bonanza in 1967 ("The Conquistadores") and in 1969 ("My Friend, My Enemy"). He also appeared in From Dusk till Dawn (1995). He also played the villain (a cult leader) in the pilot episode of the famous TV show The A-Team in the 1980s.

He also starred in the Bollywood film Shalimar (1978) co-starring opposite Dharmendra. In recent years, he has been seen in a number of independent films and has appeared in several television series, perhaps most notably CSI: Crime Scene Investigation and more recently the hit Showtime series Masters of Horror.