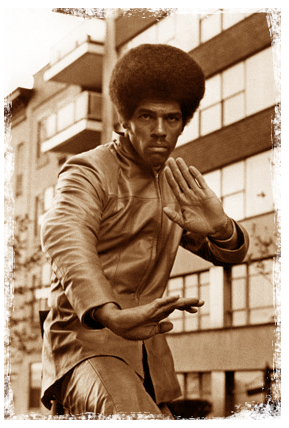 Jim 'Dragon' Kelly (May 5, 1946 - June 29, 2013) was an actor and martial artist who gained international fame after appearing as Williams in the 1973 kung fu classic Enter The Dragon. After the death of his friend/co-star Bruce Lee, Kelly went on to star in many more action B-films including such titles as Hot Potato, Black Belt Jones, Black Samurai and Three The Hard Way.

Kelly was born in Paris, Kentucky. He began his athletic career in high school, competing successfully in basketball, football, and track and field. He attended the University of Louisville where he played football, but left during his freshman year to begin studying Shorin-ryu karate. Additionally, he trained in Okinawa-te karate under the direction of Shihan Gordon Doversola. Kelly won the Huntington Beach Classic and credits Doversola with making him a world class fighter. During this time other notables as Joe Lewis would also train in the same dojo (martial arts school). After winning the middleweight title at the 1971 International Middleweight Karate Championship in Long Beach, he opened his own dojo. He taught karate to actor Calvin Lockhart for a role in a thriller feature film Melinda; he ended up playing a martial arts instructor in the movie.

As an actor, Kelly is best known for co-starring alongside Bruce Lee in Enter the Dragon. This appearance led to starring roles in a string of martial arts-themed Blaxploitation films, among them Melinda and Black Belt Jones. Most of Kelly's film roles played up the novelty of an African-American martial arts master.

After his appearance in 1982's One Down, Two To Go, Kelly appeared in movies only rarely. The role in Enter the Dragon was originally supposed to go to actor Rockne Tarkington, who unexpectedly dropped out days before shooting in Hong Kong. Producer Fred Weintraub heard about Jim Kelly's karate studio in the Crenshaw district of Los Angeles, and went there to see him and was immediately impressed. Kelly's role as Williams, an inner-city karate instructor who is harassed by white police officers, made a good impression upon directors and African-American males with his cool-cat demeanor and large afro.

He earned a three picture contract with Warner Brothers and made Three The Hard Way with Jim Brown and Fred Williamson, and Hot Potato, a movie in which he rescues a diplomat's daughter from the jungles of Thailand. After his contract ended with Warner Brothers, he starred in low-budget films Black Samurai, Death Dimension, and Tattoo Connection.