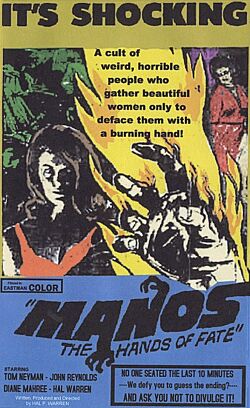 Joe Emerson was the name, and Exploitation was the game! If there was anyone to thank for unleashing the much talked about Manos: The Hands of Fate to the world, it was Emerson Film Enterprises, but this West Coast (San Francisco?) Distributor has more of a history than that. Something Weird Video DVD-wise, their history has been represented through presentations of films like Scream of the Butterfly (1965), Jennie Wife/Child (1968) and The Atomic Brain/Monstrosity (1963), while Dark Sky Films released one of their pick ups in Del Tenney's Violent Midnight (1963), a film that received East Coast Distribution through Victoria Films, as well as Creation of The Humanoids. There have been other interesting films in their history ranging from Nudie Cuties like Nick Millard's The Erotic Mr. Rose (1964) and the more sleazy fare of Richard A. Bomont's Wife Swappers (1965) (Featured as an Extra on a Something Weird Video DVD) to even a mark in the 60's Mondo world with Mondo Hollywood (1967), a film that included a brief sight of the infamous Bobby Beausoleil of "Manson Family" infamy.

Emerson Film Enterprises is one of the companies that had an occasionally interesting mixed bag of films, some Sexploitation, some Dramatic, a few Horrors, and even a German TV presentation of Hamlet featuring an English dubbing track that included Ricardo Montalban which received a treatment by the Mystery Science Theater 3000 gang. They had a flair for picking up some off-beat films, such as Manos: The Hands of Fate, including the comedy Dinah East (1970) about a 50's movie queen who turned out to be a man, Frederick Hobb's experimental Troika (1969), and The Sexterminators (1970) about a gang who targets people who have a lot of sex. With that track record, it would be easy to believe that the Emerson Films, Inc. who Distributed the infamous Psyched by the 4D Witch in 1972 is the same company.

The company faded away in The Mid-70's, after seeing diminishing returns on their attempts for a more general Exploitation catalog, among their last films being the 1974 release of Cold Sweat, a film from 1970 starring Charles Bronson and James Mason, and 1975's Fugitive Lovers starring Steven Oliver.