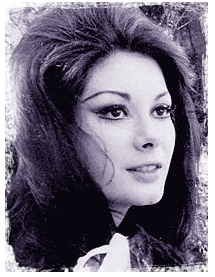 Edwige Fenech (born December 24, 1948 as Edwige Sfenek in Bône, (now Annaba) in French Algeria) is a French-born Italian actress and film producer. Edwige's nationality is Maltese and Sicilian. From the late 1960s to early 1980s, Edwige starred in many types of European genre films. She is best known for her erotic comedies such as Giovannona Long-Thigh, Sex With A Smile and Ubalda, All Naked and Warm. Edwige also achieved notoriety in the giallo genre (Italian thrillers) with films such as 5 Dolls For an August Moon, Your Vice Is A Locked Room and Only I Have The Key and The Strange Vice of Mrs Wardh, several which were directed by Sergio Martino.

In the 1980s, she became a television personality, often appearing with another popular European actress, Barbara Bouchet on Italian television. In the mid-90s, she was engaged to the well-known Italian industrialist Luca di Montezemolo.

In recent years, she produced The Merchant of Venice (2004) with Al Pacino. She also starred in Eli Roth's Hostel: Part II (2007). In honor of Edwige, Writer-Director Quentin Tarantino named a character after her in his 2009 WWII Adventure-Drama Inglourious Basterds.