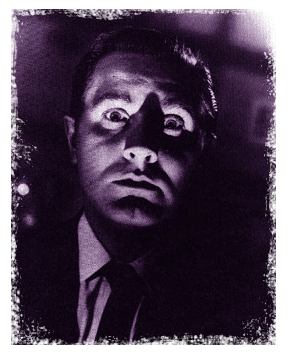 Edward Davis Wood, Jr. (October 10, 1924 – December 10, 1978) was born in Poughkeepsie, New York to Edward Sr., a postal worker and Lillian. It is said that Lillian always wanted a girl and until Ed, Jr., was 12-years-old she dressed him in girls’ clothing. Young Ed loved movies and eventually found a job as a cinema usher. He also learned several musical instruments and formed a singing quartet called Eddie Wood’s Little Splinters. Ed Wood received his first movie camera on his 17th birthday and his first “film” records the crash of an airplane. When he was 17, the Japanese attacked Pearl Harbor and Wood enlisted in the Marines.

Upon his discharge from the Marines, Wood pursued his love of the bizarre by joining the freak show of a carnival. At times, he played the part of the bearded lady and created his own prosthetic breasts. During the 1950s, he wrote, produced, and acted in a number of very low-budget science fiction, horror, and cowboy films. These films are celebrated today for their many obvious errors, cheap special effects, strange dialogue, miscasting, and crazy plots. Wood often struggled to make ends meet and was sometimes forced to churn out film scripts in one night to keep to schedules.

When his movie career began to wane, mostly from lack of funding, Wood turned his prolific creative nature to the printed page, turning out sex novels, pulp fiction, and horror stories. The lack of money took its toll and Wood struggled with health issues, including an alcohol addiction. Eventually kicked out of their apartment, Wood and his wife, Kathleen O’Hara, moved in with a friend in North Hollywood. It was there that Wood died of a heart attack while watching a football game. Wood’s legacy lives on, with, for example, the University of Southern California holding an annual "Ed Wood Film Festival" for which students are charged with writing, filming, and editing an Ed Wood-esque short film based on a predetermined theme. His movies have been spoofed on Mystery Theater 3000 and many have been remade as pornographic movies.